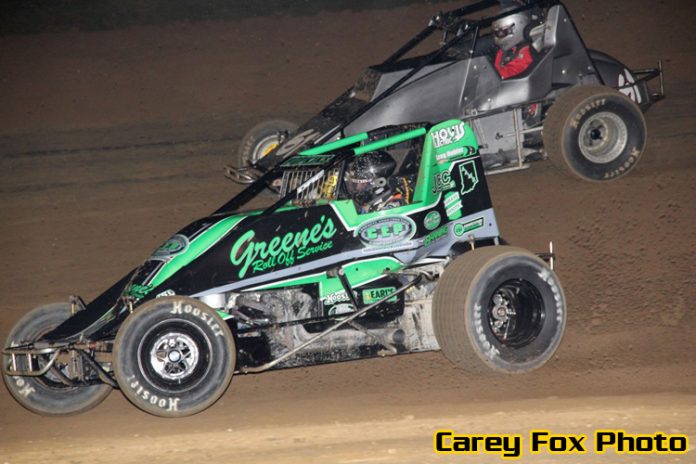 PUTNAMVILLE, IN — The pits were full and the breezes were warm at Lincoln Park Speedway this weekend as 123 cars unloaded over five classes. Brownsburg’s AJ Hopkins repeated as the sprint car victor by topping a field of 21 other cars. Ethan Barrow picked up a win in the 305 Race Saver winged sprint car feature in the series debut at LPS. Jamie Lomax avoided the rain in Illinois and made his first 2018 Putnamville trip a memorable one with a UMP Modified victory. Jonny Newgent scored the  UMP Super Stock victory and Tyler Neal won the bomber A-main.

Hopkins was on a rail for much of Saturday night as he was dominant in winning his heat race and parlayed that into a pole spot for the 25-lap A-main. Once the green flag waved, Hopkins ripped the cushion with Stevie Sussex III in tow over the first five laps. Hopkins found himself in lapped traffic by lap seven, but was navigating the lappers to perfection as his No. 4j machine worked anywhere on the track. By lap 10 the traffic had gotten heavy and Sussex closed the gap with Shane Cockrum and Jeff Bland Jr. chasing the leader.

A flip by Kent Christian halted the action briefly with him climbing safely from the car. Once the race resumed, Hopkins bolted out front again ahead of Sussex, who made a late mistake that cost him several spots down the stretch. Cockrum was able to hold off Bland over the last few laps as Jon Stanbrough got by Sussex for the fourth spot.

Lomax would start in the fifth spot as Bradley Sterrett started out front on an evening where 28 modified were on hand.


Sterrett took the green flag and opened up a several car length lead over Kenny Carmichael Sr., Lomax, Tim Prince and Dan Lewellen. As the laps ticked off, the lead back started to reel Sterrett in as the race went past the halfway mark.

Sterrett held a narrow lead as Prince and Lomax duked it out for the second spot ahead of James Walters, Carmichael Sr., Lewellen and Derek Groomer.

Lomax chased Sterrett down with seven laps remaining and did not look back. Walters was able to make a late move into the runner-up spot at the checkered flag. Sterrett took home third ahead of Groomer and Lewellen. The win was the fourth of the young season for Lomax, who had won at Kankakee on Friday evening.

In the UMP Super Stock feature, Newgent was able to take home the top spot after back-to-back runner-up finishes to Wes McClara.

This week, McClara had mechanical issues in his heat race and was forced to start 18th in the 20-lap race. Newgent would start fourth with Justin Massie leading the field to the green flag. Newgent wasted little time getting to the front and worked his way past Jason Hehman to take the point. The pair would pull away from the rest of the field and would deal only with lapped traffic by lap 10.

Newgent and Hehman split a lapped machine without missing a beat on the back stretch. Kris Starks moved up from eighth to take over the third spot down the stretch with Cullen Goodman making his way up to battle Massie for the fourth position.

Down the stretch it was Newgent, who wouldn’t bobble despite the pressure from Hehman over the final laps. The Greencastle native picked up his first feature win of the season. Starks claimed third ahead of Goodman and Massie. McClara made his way up to eighth.

Twenty-seven cars started the bomber feature with Jordan Almanza and Gary Hayden battling for the lead over the first several laps. Almanza slid into the top spot as Hayden battled with O’Neal for second ahead of Josh Litton. By lap eight, the leaders were diving into the back of lapped traffic, which complicated the process for the lead packs.

On a restart, O’Neal pulled side-by-side with Almanza with Litton pulling into the picture as well. Litton pulled even with Almanza coming out of turn two, but got over the back stretch cushion. His car got sideways and ended up rolling several times before coming to a rest against the wall. Litton was uninjured in the crash that brought out the red flag.

Once the field went green once more, O’Neal held down the top spot over the final two laps as Almanza settled in for second ahead of Hayden, Cody Wright and Ethan Linton.