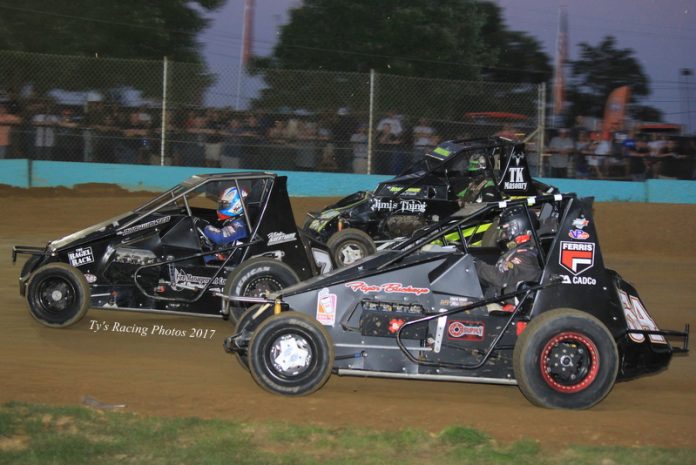 KUTZTOWN, PA – Championship Energy Action Track USA’s racers and fans are drooling with anticipation as they look forward to this Sunday’s Opening Day 2018 – the postponed Goldie and Elton Meitzler Memorial which will feature the Hyper Racing 600cc Sprints in the King of No Wing Shootout presented by Dumpster Dudez. The 40-lap main event for the 600’s boasts a lucrative $1,000-to-win payday (with a Gamblers Fee). Also in action will be the USAC All Pro SpeedSTRs and the All Star Slingshots.

There have been three previous King of No Wing Shootouts, with no repeat winners (so far). Tim Buckwalter kick started his run to the 2015 point title by capturing the very first 40-lap Shootout. In 2016, Eddie Strada emerged victorious after a furious, slide job after slide job after slide job, battle for the lead with Billy Pauch Jr., Danny Buccafusca, Brandon Azzalina, and Tommy Kunsman. The race became an instant classic that is still talked about with reverence and awe. Last season, Kyle Spence scored his first career Action Track USA triumph with a win in the King of No Wing Shootout. Will the Dumpster Dudez 2018 Shootout bring the first repeat winner of the event? The three previous victors plan to be in the field and all three will certainly be serious contenders along with Pauch Jr., Kunsman, Jason Swavely, and many others.

A paid practice will take place before the regularly scheduled Sunday, May 20 event. Practice will start at 1:45 PM and will last for 2 hours. To secure a practice spot contact Doug Rose. The cost is $40 per car.

Following practice, the grandstand gates swing open at 4 p.m. Warm-ups begin at 5:00, with qualifying races going green immediately after the hot lap sessions. The typical Sunday time schedule (which will also be used on Monday, May 28), is pit gates opening at 3 p.m., grandstand gates at 4:00, and warm-ups at 5:00.

Adult General Admission for Sunday, May 20 will be $14, Senior Citizens are admitted at $12, Kids 6-12 are $5, and Kids Under 6 are always FREE! As always, there is free parking — and a well-priced selection of food and beverage at Championship Energy Action Track USA!


Coming up on Monday, yes Monday, May 28 is the first Memorial Day Showdown at Championship Energy Action Track USA. Years ago, several speedways presented special events on the Memorial Day holiday, and Action Track USA promoters Rich Tobias and Doug Rose want to resurrect that grand old tradition. The USAC All Pro SpeedSTRs, Hyper Racing 600 Sprints, and All Star Slingshots will be joined by the Junior Slingshots on May 28.