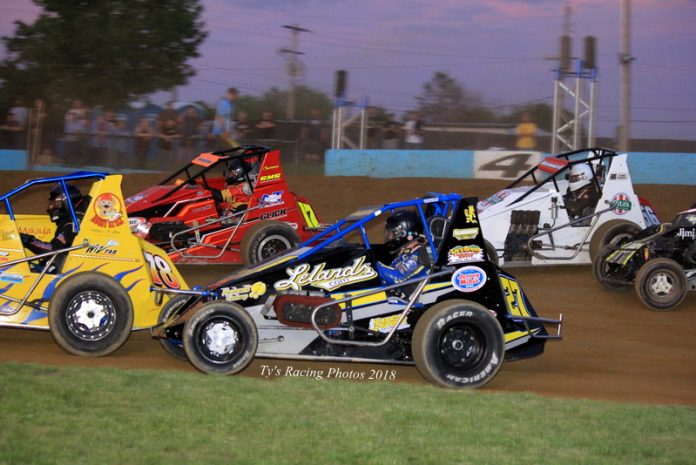 KUTZTOWN, PA – Fresh off an excitement filled season opener, the racers and fans who pack the Championship Energy Action Track USA facility on the Kutztown Fairgrounds now look forward to a first-ever event on Monday, May 28. That is when the Memorial Day Showdown, race number two of the 2018 campaign, will take place.
On May 28, the first 200 fans to enter the grandstand area will receive a Carbon Express cap, courtesy of Weaknecht Archery. One of those lucky fans will also win a Carbon Express Blade Pro crossbow.

Last Sunday, a total of 134 race cars took part in the curtain-raising Goldie & Elton Meitzler Memorial, during which the Hyper Racing 600 Sprints competed in the annual King of No Wing Shootout – an event that lured a whopping 70 entries! Billy Pauch Jr. slipped past Tim Buckwalter to take the lead in that 40-lap Shootout, then held off Alex Bright to score the victory. The 600 Sprint main was, as is the norm at Action Track USA, fast and furious. The first half of the event saw Buckwalter, Aaron Bollinger, and Pauch wage a nip-tuck battle for the top spot that had the trio under a blanket as they fought for the lead. Bright and Kyle Lick came to life in the second half of the race, as they challenged Buckwalter for the runner-up slot and then went after race leader Pauch.

The biggest movers of the race were Lick, who threaded his way from 16th to 3rd, Jesse Maurer weaved a path from 20th to 7th, young charger Christian Bruno who started 21st and finished 9th, and Danny Buccafusca, who advanced more positions than anyone. Buccafusca rolled off from 26th starting spot and steadily worked his way forward to 10th when the checkered flag waved.

The USAC All Pro SpeedSTR main event did not lack for action, either, as Tim Buckwalter diced with Tyler Ross for the first 14 trips around the oval. Ross gave the defending point champ all he could handle as the duo swapped the lead numerous times before Buckwalter finally secured it for good. Ross had such a good ride going, only to get caught up in a wreck with just five tours remaining.

Ohio’s Matt Westfall ended up finishing second to Buckwalter, but thought he had a legitimate shot at passing the leader until his power steering gave out with six laps to go. Westfall muscled his Ferris Mowers No. 54 to a strong runner-up finish.


Steve Buckwalter motored from 18th on the starting grid to run fifth, but his progress stopped when he was forced to drop out with overheating issues with ten circuits left to run.

Billy Pauch Jr. started 11th, made an unintentional infield excursion early in the race (but returned to the track and kept on going), losing several positions, then climbed back to third by race’s end.

Stephen Nederostek, Tim Iulg, and Matt Janisch battled for top five spots throughout the 30-lapper, giving the large crowd plenty to watch during a very entertaining race.
Jared Silfee worked hard to pass Scott Neary and early leader Cody Kline in the All Star Slingshot feature. Taylor Mills put on a show, rumbling from his 11th starting spot to battle Silfee for the lead before settling for second place money. Dakota Kohler started 19th and sliced his way to fourth at the finish, while Mike Taylor went from 21st at the start to a seventh place payday. The biggest mover in the Slingshot feature, though, was Matt Miller, who began the race in 25th and wound up ninth when it was over.

It’s easy to see there’s no lack of competition and plenty of passing once again at the aptly named Action Track USA. And the thrills continue on Monday, May 28, during a Monday night rumble known as the Memorial Day Showdown. The Junior Slingshots will join the SpeedSTRs, 600 Sprints, and All Star Slingshots.

Pit gates will open at 3 p.m., with grandstand gates swinging open at 4:00. Warm-ups begin at 5:00, and the qualifying races go green immediately following hot laps.
Adult general admission is $14.00, and Senior Citizens tickets are $12.00. Youth between the ages of six and 12 get in for $5.00, and children under the age of six are free.
Coming up on Sunday, June 3, is Glick Fire Equipment First Responder Night presented by Belfor Property Restoration. First Responders with a current and valid I.D. get in free on June 3rd, and there will be fire trucks and rescue vehicles on display, along with informational displays and raffle prizes for the fans. Highlighting the on-track activity will be the USAC All Pro SpeedSTRs, the Hyper Racing 600 Sprints, the All Star Slingshots, and the Junior Slingshots.