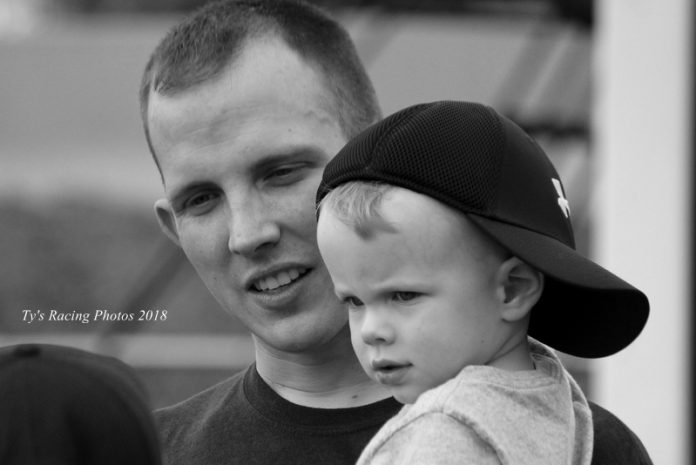 Anthony Perrego and Jeff Hartman dueled for the early lead with Hartman finally securing the spot on lap three. Before he could take a breath, however, Hartman found himself in the midst of a five car tussle for the top spot as Tom Mayberry, Steve Buckwalter, and Perrego were joined by last week’s winner Tim Buckwalter, who started 11th.

Hartman hung tough until Mayberry muscled by him to grab the lead on the 12th trip around the clay. Pauch Jr was now in the mix as well, taking the runner-up spot from Hartman and immediately putting pressure on race leader Mayberry. They traded slide jobs at both ends of the speedway, with Pauch Jr gaining the edge on the 16th circuit.

The second half of the race belonged to Pauch, although Mayberry closed in on a couple of occasions and tried to shove the nose of his No. 17r under the leader. But Pauch was too strong and held on to win over Mayberry, who recorded his best ever finish in a SpeedSTR by taking the checkered in the runner-up position.

“Really cool to win on Memorial Day in front of this big crowd, with my car owner (Mike Heffner) here, and on my sponsor’s night, too,” said Pauch in victory lane. “Before the races, I said I was going to get this one for Weaknecht Archery.”


“We just got tight in the middle of the race,” noted Mayberry. “But we’re headed in the right direction, I think. It’s fun to race up front again; hopefully we can get a win one of these days.”

Tim Buckwalter finished third with Hartman and Steve Drevicki rounding out the top five. Buckwalter said he lost his power steering near the end of the 30-lapper, while Drevicki rebounded from an early race tangle to finish fifth.

A fantastic Hyper racing 600 Sprint feature saw Phoenixville, PA’s Alex Bright emerge with the victory, but only after he swapped the top spot a few times with race long leader Nash Ely.

Ely, the 15-year-old son of Sprint Car driver Dave Ely, started on the pole of the 25-lap main event and burst into the early lead. He fought off challenges from Jacob Severn and Kyle Spence throughout the race but, just when it appeared that Ely might win his very first 600 Sprint feature, Bright showed up in second place.

Bright, “the Phenom”, executed a pair of sliders on Ely on the white flag lap. Both times, Ely turned left and drove back under Bright to regain control. Heading into turns three and four on the final circuit, though, Bright threw another slider and drifted up close enough to Ely that the two cars touched slightly, breaking Ely’s momentum and enabling Bright to gas his mount to the checkered flag as the winner.

Ely chased him to the finish line and came away with second place money, while Billy Pauch Jr, Kyle Spence, and Colin White finished third through fifth.

A total of 73 entries made up the field in the Hyper Racing 600 Sprint division on Monday.
Travis Bieber, from Oley, PA, captured his third career All Star Slingshot win at Action Track USA, and his first since 2016. Bieber led all the way, giving up first place in the 20-lap feature for just a short time to NY’s Nick DelCampo, who marched under the leader on a restart with four to go. Bieber wrestled the top spot back from DelCampo in a sheet metal rubbing duel off turn four that left DelCampo limping down the homestretch.

“I hate that (the contact) happened,” said Bieber afterward. “I hit a hole in four that just threw me up the track and in to Nick, and I’m really sorry that it ended his race.”
At the finish, it was Travis Bieber winning and his brother Brett crossing the line in second. Taylor Mills, Dakota Kohler, and Jared Silfee made up the top five.

Tyler Ulsh won the Junior Slingshot feature, leading all the way and holding off some stiff challenges from Kasey Hufcut.