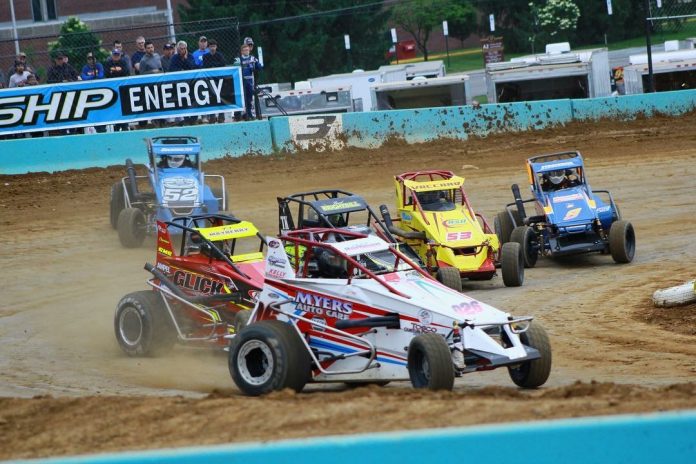 KUTZTOWN, PA  – In one of the more unique promotions, Championship Energy Action Track USA in cooperation with Aqua Duck Water Transport and the Low Down Dirty Radio Show are offering a $2,000 bonus to any USAC competitor that can win any Wednesday, June 13 main event at Action Track – SpeedSTR, 600cc Sprint Car, or Slingshot — and a race on the USAC Eastern Storm swing.

“The USAC drivers participating in this event are some of the best-of-the-best in traditional non-wing sprint cars,” Scott Diehl from Low Down and Dirty Radio said.“These guys are all about close wheel to wheel, against the fence, elbows up action.To see them battle with our local SpeedSTR guys is going to be epic – and we’re really excited to be a part of it.”

Of course, no stranger to Action Track victory lane, 2017 Series Champion Tim Buckwalter and SpeedSTR competitor Matt Westfall will also be participating in USAC Eastern Storm events – and could be hefty competition to the invaders.

If the Wednesday, June 13 event goes unclaimed a $500 bonus will be offered up to the first Eastern Storm winner that competed at Championship Energy Action Track USA.
Any USAC drivers interested in registering should contact Doug Rose at the Speedway Office.

The next event on the Action Track agenda is Sunday, June 10 – Scout Night. Boy Scouts & Girl Scouts who wear their uniform to the races will receive FREE admission! Pit Gates open at 2:30 PM, Grandstand Gates at 3:30 PM and warm-ups will start at 4:30 PM, followed by the 600cc Mad Scramble – for cars that didn’t qualify on June 3 – then the Slingshot and 600cc Sprint Car make-up features, followed by a full program for the SpeedSTRs, 600s, and Slingshots.

Fans will receive the benefit of dual features for the 600cc Sprint Cars and Slingshots with a General Admission Adult price of $14, Senior Citizens $12, Kids (6-12) $5, and Children 5 and Under FREE!

Championship Energy Action Track USA is located on the grounds of the Kutztown Fair in Kutztown, Pennsylvania.For more directions and more information fans can visit online atwww.actiontrackusa.com.Race fans are also encouraged to engage on Facebook by searching Action Track USA and on Twitter and Instagram @actiontrackusa.