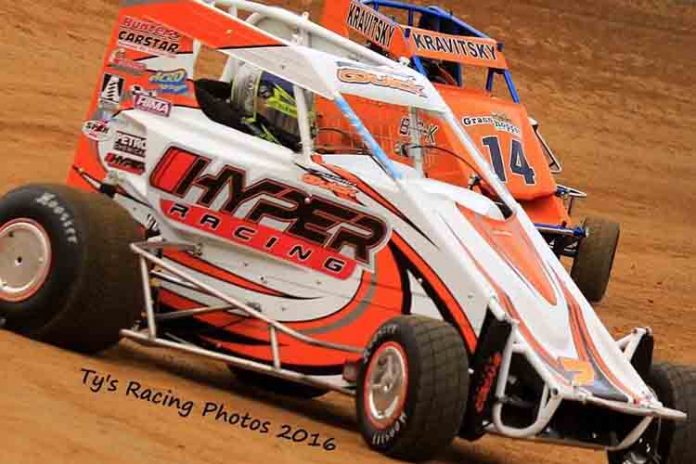 KUTZTOWN, PA – Championship Energy Action Track USA returns on Wednesday, July 11, and the track known for heart-stopping thrills, chills, and spills comes back from its annual mid-season break in a big, big way…

When the clay oval located on the Kutztown Fairgrounds opens its gates for the second half of the 2018 campaign, the Hyper Racing 600 Sprints will be competing for a $1,000 payday (with Gambler’s Fee) in the Fifth Annual Tri-Track Challenge. Joining the ever-popular, ultra-competitive 600 Sprints will be the USAC All Pro SpeedSTRs in not one, but TWO big main events! The SpeedSTRs will make up the feature that was postponed by rain on June 3rd, then take part in a full program of qualifying heats, B-Main, and another 30-lap feature race! The All Star Slingshots are also on the Wednesday, July 11 menu as the speedway moves back to its traditional midweek slate of events on four consecutive Wednesday nights (July 11, 18, 25, and August 1).

On July 11, pit gates open at 4 p.m., with grandstand gates swinging open at 5:00. Warm-ups begin at 6:00 and the make-up feature for the SpeedSTRs will follow the hot lap sessions. When that 30-lapper has concluded, a full program of qualifying races, last-chance qualifiers, and feature races will commence with the highlight being the $1,000 to win (with Gambler’s Fee) main event for the Hyper Racing 600 Sprints. July 11 is also Checkered Flag Fan Club Night at Action Track USA.

General admission tickets for adults are $14, with a $2.00 discount for Senior Citizens. Youth tickets (ages 6-12) are priced at $5.00, with children under the age of six admitted free. Pit passes are $25 with a USAC membership and $30 for non-members.

In July of 2013, when the event was still run as part of PA 600 Speedweek, Mike Rutherford was victorious in the $1K Challenge race. There was no Challenge Race in July of ’14, but it resumed in 2015 as the final leg of the Tri-Track Challenge, a three-race series among Linda’s Speedway, Lanco’s Clyde Martin Memorial Speedway, and Action Track USA. Brandon Azzalina captured the 2015 event, while “the Phenom”, Alex Bright, took the checkered flag in July of ’16. Last year, Jason Swavely notched the triumph for his second win of the season.


The Hyper Racing 600 Sprints have not had a repeat winner so far this season; after five events, the drivers scoring single victories include point leader Billy Pauch Jr., Alex Bright, Danny Buccafusca, Kenny Miller III, and Stoney Point, NY’s Damon Paul. A whole host of additional contenders, like Tim Buckwalter, Eddie Strada, Jason Swavely, Kyle Spence, and many more remain winless as the season heads into its second half. That means the July 11 event will be intense, especially with a potential $1,000 paycheck on the line.
Pauch Jr., a two-time SpeedSTR point king at Action Track USA, currently leads both the 600 Sprints and SpeedSTR standings. With a double-dose of 30-lap SpeedSTR features scheduled for July 11, though, anything can happen and the Milford, NJ driver’s edge in points could disappear by the end of the night. 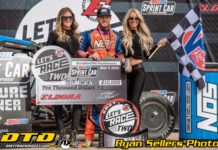