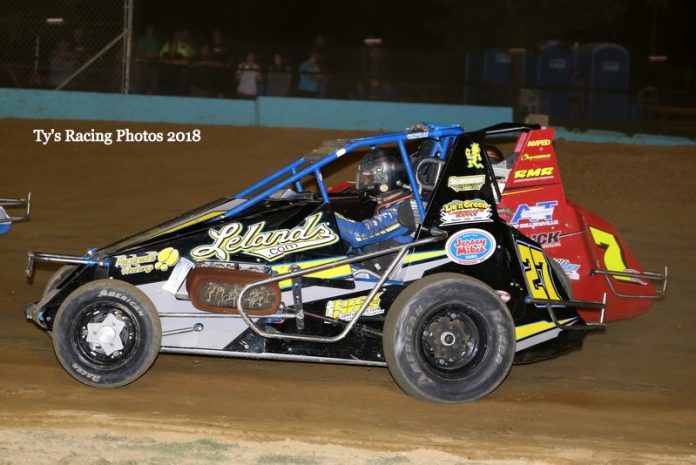 Pauch Jr., from Milford, NJ, strengthened his point lead in both the USAC All Pro SpeedSTR and Hyper Racing 600 Sprint Classes by winning those main events on Wednesday, joining Tim Buckwalter as the only drivers to accomplish that feat on the same night at the Berks County oval. Buckwalter pulled it off in the Meitzler Memorial Race in May of 2016.

While his achievement is certainly newsworthy and deserving of praise, Pauch had to share the spotlight with Allentown, PA teenager Briggs Danner, who scored a hugely popular victory in the evening’s first main event, a 30-lapper for the SpeedSTRs that was postponed by rain on June 3rd. Danner’s win was his first-ever in the SpeedSTR division, and he had to hold off some of the best in the business in order to get it.

Jared Silfee of Saylorsburg, PA, registered his second triumph of the season in the All Star Slingshot finale on Wednesday.

Coming up on Wednesday, July 18, is the sixth annual Ronnie Tobias Memorial, highlighted by Twin 20-lap features for the SpeedSTRs, a pair of 17-lap mains for the 600 Sprints, and a 40-lap feature for the Slingshots. Pit gates open at 4 p.m., grandstands at 5:00, and warm-ups will commence at 6 p.m. A modified format will be utilized for qualifying in all three classes in order to accommodate the extra main events.


The 30-lap SpeedSTR feature that was rained out on June 3rd was finally contested on Wednesday night. Briggs Danner started on the pole and held off a determined Anthony Perrego and Tommy Kunsman over the first five circuits before Steve Buckwalter brought out the red flag by flipping wildly down the backstretch and into turn three. Buckwalter was not injured in the mishap but his Bob Swavely owned, Rita’s Italian Ice No. 56 was done for the night.

When they got back to racing, Danner held serve and maintained the lead over Perrego, while 14th-starter Billy Pauch Jr. sliced his way to third by lap 16. On a restart with 17 complete, Perrego raced nose to nose with Danner through turns one and two and down the back chute. Perrego’s Wayne Subaru No. 1 inched ahead as they crossed the stripe on the 18th trip around the clay and he proceeded to set the pace for the next four tours. That is when Danner mounted another assault, shoving the nose of his car under Perrego and back in front to lead lap 22 by a bumper. Danner cleared Perrego as they dashed off turn two, and Tim Buckwalter slipped past Pauch Jr. for third at the same time.

Danner kept his mount in at the head of the pack over the final eight revolutions, scoring the win by 0.297-seconds over Perrego, who said his engine began skipping a bit during the final ten laps. Tim Buckwalter wound up third with Pauch Jr. and Ohio’s Matt Westfall rounding out the top five.

In the night’s regularly scheduled SpeedSTR main, Jason Rochelle led from the pole until Pat Bealer wrestled the top spot from him on the third trip around the progressively banked oval. TJ Mayberry worked his way past Rochelle to run second and soon Matt Janisch pulled into third, but all eyes were on Billy Pauch Jr. as he weaved his way from tenth on the starting grid to run fourth by lap six.

On a red flag restart with six circuits in the books, the No. 48 of Janisch would not refire, moving Pauch to third and Rochelle back to fourth. As the race went back to green, Rochelle blasted by Pauch and Mayberry, setting his sights on Bealer. Rochelle reclaimed the top spot one lap prior to the halfway point, and Pauch passed Bealer for the runner-up position with 13 to go. With ten laps remaining, Pauch gassed his Heffner Motorsports/ Lelands.com/ Weaknecht Archery No. 27 past Rochelle and into the lead as they roared down the homestretch. He separated himself from the field over the final circuits, beating Rochelle to the checkered by almost two-seconds. Rochelle recorded his best-ever SpeedSTR finish by holding on for runner-up money, with Matt Westfall making a late race charge to end up third. Bealer was a season-best fourth and TJ Mayberry completed a very solid night with a fifth place effort, following his sixth place finish in the first feature.

The victory was Pauch’s third of the season in SpeedSTR competition, and his division leading 15th career SpeedSTR triumph at Action Track USA.

As is customary at Action Track USA, the Hyper Racing 600 Sprint feature was incredibly competitive, insanely intense, and wildly entertaining for its entire 25-lap distance. With a hefty $1,000 payday awaiting the winner (provided he/she paid the Gambler’s Fee at sign-in), the race appeared to come down to a three-car duel between Tim Buckwalter, Jason Swavely, and a charging Eddie Strada. But it all changed in a heartbeat…

Buckwalter started second and grabbed the lead at the outset, with third-starting Swavely firing into the runner-up slot ahead of Tyler Lindsay. Joe Kay and Colin White were also in the mix, along with Damon Paul and Billy Pauch Jr., who started tenth but found himself just inside the top five by the time lap seven was scored.

Strada, in Greg Stevens’ No. 20, came to life after the first restart with seven complete. He went to the top of the banking, powering his way forward as the laps clicked off. With Buckwalter and Swavely battling for the lead, Strada swept past three cars with one power move in turns one and two, rocketing around Lindsay, Paul, and Pauch to secure third position on lap ten.

The next eight tours saw Swavely begin to throw slide jobs at the leader, with Buckwalter crossing over and executing his own sliders to move back in front in the next set of left turns. The battle heated up even more with Strada lurking in third, at one point slamming his right-rear off the front stretch wall without losing any ground to the top two drivers. As they crossed the stripe to complete lap 18, Swavely ducked under Buckwalter entering turn one and the duo banged wheels, forcing Buckwalter up the banking as Swavely shot to the lead. Rumbling down the backstretch, Buckwalter drew even then edged ahead, but contact was made between he and Swavely, throwing both cars sideways and collecting Strada as all three stopped at the end of the back chute and the rest of the field scrambled to get by without making contact.

The end result was Pauch Jr. the new leader and Brian Carber in the runner-up position. Swavely and Buckwalter were eliminated from the race but Strada was able to restart and salvaged a ninth-place finish. Carber ran the bottom and Pauch rolled the top for the final seven trips around the clay, with Pauch using his momentum on the high side to maintain a slim lead over Carber. At the checkered, it was Pauch notching his second win of the season in the Hyper Racing 600 class, with Carber, in a rare Action Track USA start, finishing a strong second. Damon Paul continued his recent string of podium finishes with a third place effort, while Alex Bright and Joey Jarowicz completing the top five.

The 20-lap main for the All Star Slingshots provided the nightcap to the evening of high speed adventure. Joey Vaccaro bolted to the early lead with Jared Silfee quickly snaring the runner-up spot. The first eight revolutions were marked by a terrific tussle for the top spot, as Silfee looked high and low but could not find a way to draw alongside the leader. A restart with eight laps in the books proved to be the difference, as Silfee hammered the accelerator of his S&S Speedways No. 55 to move in front of Vaccaro, then immediately turned left to slam the door on the No. 53 as they entered turn one. Two late restarts, with five to go and with one lap remaining, did not deter Silfee’s run to victory as he held off Kyle Herve, Dylan Hoch, and Vaccaro to record his second win of the current campaign.

At the checkered it was Silfee, Herve, Hoch, Vaccaro, and Ryan Davey making up the top five.

A total of 103 racecars took part in Wednesday’s program, which was also Checkered Flag Fan Club Night at the speedway. There were 30 SpeedSTRs, 47 of the 600 Sprints, and 26 All Star Slingshots on hand as the track returned to action after its annual mid-season break.

Anthony Perrego was quickest in the Timed Dashes for the USAC All Pro SpeedSTRs. The Montgomery, NY driver turned a quick lap of 12.191-seconds. Tim Buckwalter had the second best lap as both he and Perrego locked themselves into the 30-lap feature. Andy Haus, Steve Drevicki, and Steve Buckwalter made up the fast five in the Timed Dashes.

Some impressive runs in the 600 Sprint feature turned in by the following: Aaron Bollinger started dead last, 28th, before climbing all the way to seventh; Kyle Spence sliced his way from 26th to eighth, and Joey Jarowicz threaded his way from 19th on the original start to a season-best fifth!

The Sixth Annual Ronnie Tobias Memorial, highlighted by Twin 20’s for the SpeedSTRs, Twin 17’s for the 600 Sprints, and a 40-lap feature for the Slingshots, is slated for next Wednesday, July 18. Coming up on July 25 is the Kutztown Komet 100 for the All Star Slingshots; the SpeedSTRs, 600’s, and Junior Slingshots will also be on the July 25 menu.