KUTZTOWN, PA – He’s been MIA for almost two seasons, but the 2016 SpeedSTR point champion, Billy Pauch Sr., will strap himself into one of the fire-breathing racers this week as he returns to competition at Championship Energy Action Track USA on the Kutztown Fairgrounds.

Pauch, a nine-time SpeedSTR winner from 2013 through 2016 at Action Track USA, is using this Wednesday’s Troy Moyer Memorial as a tune up for Sunday’s Dick Tobias Classic…an event that pays $5,000 to the winner of its 75-lap feature race. He will drive a second car out of the Heffner Motorsports stable, where he’ll be a teammate to his son, Billy Jr.
Mike Heffner was also his car owner when he won the 2016 SpeedSTR title at the Berks County oval, and Pauch hopes to quickly rekindle some of the magic he and Heffner achieved in their seasons together. In addition to Wednesday’s race and the Dick Tobias Classic on Sunday, Pauch is eye-balling October’s World Series of Dirt Track Racing event at Selinsgrove, when the winner of the 100-lap SpeedSTR race will pocket $10,000.

This Wednesday, August 1, the Troy Moyer Memorial will consist of qualifying races and a 30-lap feature for the USAC All Pro SpeedSTRs, while the Hyper Racing 600 Sprints compete in the opening race of 600 Speedweek. A $1,500 prize (with Gambler’s Fee) awaits the winner of the 600 Sprint main. The All Star Slingshots are also on the menu, and they will be kicking off a Speedweeks of their own. The Junior Slingshots are part of Wednesday’s card as well.

Pit gates open at 4 p.m. and grandstand gates swing open at 5:00. Warm-ups begin at 6:00 and qualifying races go green immediately following the hot lap sessions.
General admission tickets for adults are $14, with a $2.00 discount for Senior Citizens. Youth tickets (ages 6-12) are priced at $5.00, with children under the age of six admitted free. Pit passes are $25 with a USAC membership and $30 for non-members.

The Dick Tobias Classic on Sunday, August 5, features the SpeedSTRs in a $5,000 to win, 75-lap main event; the final Speedweek race for the Hyper Racing 600’s ($1,500 to win with Gambler’s fee); and the All Star Slingshots. Warm-ups begin at 5 p.m. and adult general admission tickets will be $20. 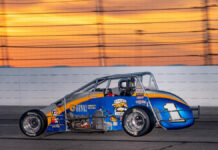