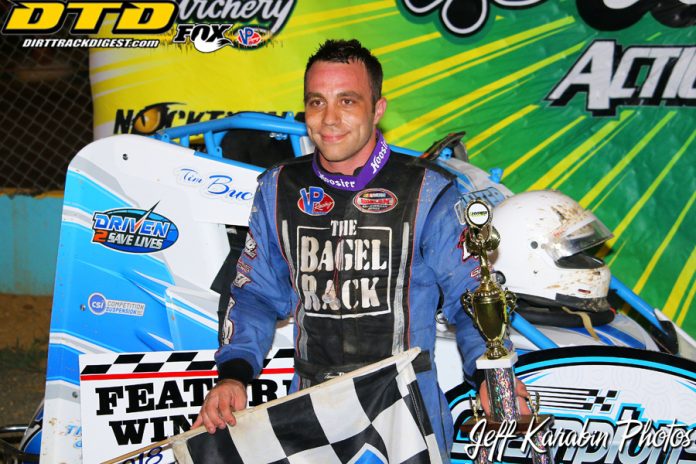 KUTZTOWN, PA –  Dick “Toby” Tobias was all about family, so perhaps it was only fitting that two members of another renowned racing clan, the Buckwalters, battled for the win in Sunday’s Dick Tobias Classic at Championship Energy Action Track USA on the Kutztown Fairgrounds.

In the end, the 75-lap SpeedSTR main event – and the $5,000 winner’s check – went to Douglassville’s Tim Buckwalter, who wrestled the lead from his cousin Steve with 14 laps to go. Tim went on to score his second win of the season, but it was his first checkered flag in the sixth annual Dick Tobias Classic.

“I’ve been trying to win this one for about the past four years because, driving for Paul Lotier Jr., I knew how much this one means to him.” Toby was Lotier’s grandfather, so it’s obviously a very special race for him.

Sunday night’s event was also the final race of Hyper Racing 600 Speedweek, and the non-wing 600 Sprints did not disappoint, as a stellar field of 60 turned out and Colin White won a very competitive 35-lap feature. Kyle Spence of Bear, DE captured the Speedweek point title with his tenth-place finish.

Justin Thompson won the 40-lap main for the All Star Slingshots.


With caution laps counting in the first 25-laps of the Tobias Classic for the SpeedSTRs, Matt Janisch led the way until Steve Buckwalter powered past him off the top of turn four on the 29th trip around the oval. From laps 33 through 50, a terrific contest ensued for second position between Janisch, Ohio’s Matt Westfall, and Tim Buckwalter with the Pauch family, Billy Jr. and his dad, Billy Sr., right behind them.

The yellow flew for a spin by Ed Kenderdine with 50 circuits complete, and that meant it was time for the mandatory pit stop for all the teams, with the work taking place on the front stretch in full view of the large crowd. The adjustments made by Tim Buckwalter and his BusinessLinkPrint.com crew certainly aided his cause, as Buckwalter’s No. 52 was much better over the final 25 tours. Of course, it also helped that he was the first to discover a faster line in the corners.

”He found the top, especially in one and two, before everyone else,” lamented Steve Buckwalter afterward. “As the leader, I thought I was good where I was running, and you don’t know if you should try another groove. But Timmy found the top and he was actually much better than us at the end.”

The cousins battled furiously for several laps before Tim executed a slide job on Steve in the third and fourth corners. He was in front by inches as they crossed the stripe to complete lap 61. After a red flag for a Kevin Woody flip with 66 complete, Tim Buckwalter drove away from Steve to record the triumph by 1.25-seconds. Following Steve Buckwalter across the line were Billy Pauch Jr. (who had won the three previous Tobias Classics), Briggs Danner, and Westfall.

Colin White had finished second on a few occasions this season, and he let everyone know how he felt about being the runner-up when interviewed after the races. On Sunday night though, he was very pleased with his finishing position after he scored his first Action Track USA win in the Hyper Racing 600 Speedweek finale`.

White had to survive an intense duel with his good friend Damon Paul, as the two young chargers turned the clay oval into “Slide Job City”. Paul led the early laps with White shoving the nose of his No.6 in front on laps eight through 11. Paul was back in front from laps 12-14, with White reclaiming the top spot for good on the 15th revolution. He then drove away, leaving Paul to fight with Jay Hartman for the runner-up slot during the second half of the race. White zipped to the checkered by several car lengths over Paul, who held off Jay Hartman for second place money. Hartman, point leader Billy Pauch Jr., and Jesse Maurer completed the top five.

Justin Thompson, from Jonestown, PA, notched his second All Star Slingshot victory of the season in that division’s 40-lap feature on Sunday. Thompson snatched the runner-up spot from Cody Kline on a restart at the halfway mark, then took the lead from Austin Daniels on lap 34, just a half-dozen circuits from the end.

Thompson drove under the checkered flag with a quarter-second margin over Jared Silfee, with Daniels racing home third. Brett Bieber and Kline rounded out the top five.

The speedway is now dark until National Dirt Week during the annual Kutztown Fair. Monday, August 13 is practice night for the winged and wingless 600 Sprints. Tuesday the 14th will see a first-ever winged 600 event at Action Track USA, with 4-Cylinder Stock Cars and the STARS Mod Lites also on the card.

Wednesday August 15 is the Kutztown Fair Nationals for the wingless 600 Sprints, highlighted by a 60-lap main event paying $2,000 to the winner (with Gambler’s Fee). The USAC SpeedSTRs and Junior Slingshots join the wingless 600’s that night.

Thursday the 16th is the Super Slingshot Fair Nationals, with the All Stat Slingshots going 55-laps for $2,000 (with Gambler’s Fee). They will be joined by the AMA Flat Track Motorcycles.

An event has been added to the schedule on Sunday night, August 19. The final race of the season will crown the 2018 point champions in the SpeedSTR, 600 Sprint, and All Star Slingshot divisions.

For all the details on these events, check out the speedway’s website at www.actiontrackusa.com.