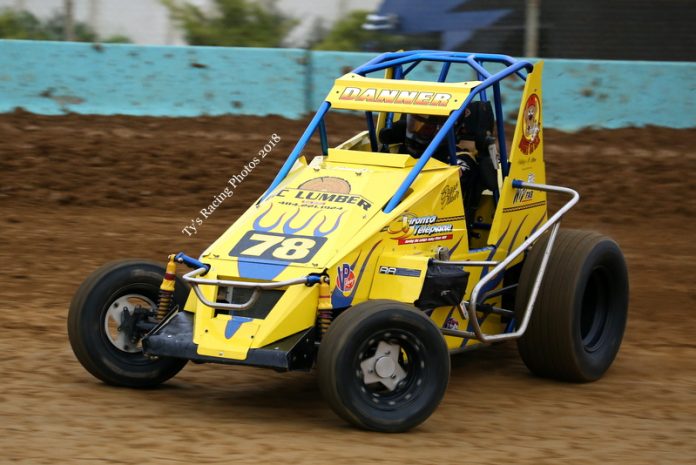 KUTZTOWN, PA – The 2018 racing season concluded on Sunday, August 19 at Championship Energy Action Track USA on the Kutztown Fairgrounds. When the final checkered flags waved after another night of competitive, close-quarters racing action, Allentown’s Briggs Danner emerged as the driver with the most wins (this season) in the USAC SpeedSTR division, nailing down his fourth of the year in the 30-lap finale`.

Stoney Point, NY’s Damon Paul captured his second victory of the season in the 25-lap curtain-closer for the Hyper Racing 600 Sprints. Jared Silfee of Saylorsburg, PA capped a big week by winning the Kutztown Komet 100 for the All Star Slingshots. His win also clinched the 2018 Slingshot point title and it came just days after Silfee’s $2,000 triumph in the Super Slingshot Fair National during National Dirt Week at the fairgrounds. Tyler Ulsh was victorious in the Junior Slingshot feature on Sunday. Ulsh used his win to catapult from third to first in the Junior Slingshot point standings, winning the title by just five points over Shelby McLaughlin.

Billy Pauch Jr. was another racer who had a very successful season finale` on Sunday. Even though he did not win either of the features in which he competed, the Milford, NJ ace secured point championships in the USAC SpeedSTR division (his third title at Action Track USA) and in the Hyper Racing 600 Sprint class.

The 30-lap SpeedSTR main began with Stephen Nederostek grabbing the early lead, then fending off the challenges of Matt Janisch and TJ Mayberry. Sixth-starting Briggs Danner was the man on the move, winging his way third on the sixth trip around the racy oval. Janisch pushed his No. 48 to the lead on lap ten, leaving Nederostek to battle with Danner for the runner-up spot.

Danner claimed second a few circuits later, then engaged in a “slider-fest” with Janisch, trading slide jobs at both ends of the progressively banked speedway. Danner finally cleared the Janisch machine on the backstretch of lap 17 and went on to record the victory, his fourth of the season, by more than 1.5-seconds over Janisch. Tim Buckwalter, who had won the previous two SpeedSTR events at the Berks County race place, slipped past Nederostek to take over the third position with eight to go, and that is where he finished. Steve Drevicki and Pauch Jr. completed the top five.

The 30-lapper went non-stop, the first time in the six-year history of Action Track USA that the SpeedSTRs ran an entire feature clean and green. Danner’s winning time was 6:16.153 in an entertaining race highlighted by intensely competitive action throughout the field.
Quick calculations after the feature indicated that Pauch Jr. won the championship by 135 points over last year’s champ, Tim Buckwalter.

Douglassville’s Tim Buckwalter started on the pole of the Hyper Racing 600 Sprint main event and led the first four tours. Suddenly, as he was exiting turn two with four down, Buckwalter’s mount slowed drastically as the pack behind him scrambled to avoid contact. The yellow flag was displayed and Buckwalter headed to the pits.

Mike Thompson inherited the lead at that point, but Nash Ely had other ideas and passed Thompson on the fifth revolution. Jay Hartman (started seventh) and Damon Paul (started ninth) were soon dueling for the runner-up slot as Ely continued to set the pace. Paul dispatched Hartman for second, then began his assault on the leader, Ely, as the two young guns swapped slide jobs for a few circuits before Paul took command for good.

Billy Koch moved up to challenge Ely for second place as the race entered its second half. Koch prevailed after a nose-to-nose, several lap battle and would eventually score his best finish of the season in that position. A caution with five to go bunched the field one final time and gave Koch one last opportunity to go for the win. Paul was just too strong on this night, however, and drove off to his second triumph of the year at Action Track USA. Koch settled for runner-up pay, with Andrew Layser and Alex Bright muscling past Ely during the final laps to finish third and fourth, respectively. Ely wound up fifth. Bobby Butler was sixth and Pauch Jr. finished seventh to lock up his first 600 Sprint point title at Championship Energy Action Track USA.

The Kutztown Komet 100, run in memory of the late, great dirt Modified campaigner Freddy Adam, was rained out on July 25. The 100-lap race was rescheduled for the season finale` on Sunday, and the All Star Slingshots competed in fine fashion with only a few spotty caution periods slowing the event.

CJ Fritz led the entire first half of the race, with Cody Kline and Dylan Hoch catching the leader in lapped traffic as they closed in on the 50-lap mark. The yellow/red waved to end the first half, with a mandatory halftime break scheduled for adjustments, before Kline and Hoch could muster a serious challenge for the lead.

At the break, it was CJ Fritz, Cody Kline, Dylan Hoch, Jared Silfee, and Anthony Raisner making up the top five. At that point, Hoch held a slim three-point lead over Silfee in the fight for the 2018 championship. Hoch began the race trailing Silfee by seven tallies.
As the second half went green, Silfee served notice that he had the car to beat. He quickly disposed of Hoch and Kline to garner the runner-up position, then went after race leader CJ Fritz. While Silfee passed Hoch and Kline on the high side, he ducked low to pull even with Fritz in turns three and four before motoring ahead as they charged down the front stretch to complete lap 58.

It was all Jared Silfee from that point on, as the S&S Speedways No. 55 sped out to a healthy lead. Hoch darted past Kline for third on the 69th trip around the oval and Justin Thompson entered the top five at the same time. A yellow flag with 19 tours remaining brought Silfee back to the pack, but he simply put his right foot to the floor on the restart and pulled away once again.

Fritz maintained second place, but Hoch and Kline got together in turn two, sending Kline’s No. 112 toward the wall. Kline gathered his mount and continued, but lost two positions as Thompson and Dave Carraghan shot by him. Both Thompson and Carraghan worked past Hoch in the final laps, and when the checkered flag waved it was Silfee locking up the 2018 All Star Slingshot Championship by winning the 100-lap event. CJ Fritz ran a consistently strong race to finish second, with Thompson, Carraghan, and Hoch completing the top five.
While the All Star Slingshot point chase was tight, the closest point battle occurred in the Junior Slingshot division, where Shelby McLaughlin held a ten-point lead over Aidan Donaldson and a 35-point margin over Tyler Ulsh entering their 15-lap feature on Sunday night. Ulsh dashed from the pole position to lead all the way, winning his second Junior Slingshot main of the season.

Logan Bauman and McLaughlin diced for the runner-up spot until Kasey Huffcut sliced through the field to pass McLaughlin for third. Huffcut went by Bauman on lap six to take over the runner-up position, but Ulsh was long gone by that time. McLaughlin was able to get past Bauman for third as the laps clicked off, and she chased Ulsh and Huffcut to the checkered flag.

The victory for Ulsh, combined with McLaughlin’s third place effort, proved to be a difference of 40 points, giving Ulsh the point crown by just five markers over McLaughlin. Donaldson finished sixth in the race, behind Joey Kalafut, and slipped to third in the final standings.

Action Track Sidebites:
Just as the 600 Sprint Mad Scramble was about to go green, a shower doused the speedway, causing just a short, 30 to 40 minute delay in the start of the final program of the season. A few rain drops fell near the end of the SpeedSTR feature, too, but did not cause a stoppage.

The 50-car field was split into five qualifying heats, with victories going to Tim Buckwalter, Damon Paul, Andrew Layser, Matt Westfall, and Billy Koch. A pair of C-Mains were won by Joey Amantea and Brett Altemose, while the B-Main went to Colin White.

Tyler Ulsh made it a clean sweep in Junior Slingshot competition, winning the lone heat race before taking the feature win as well.

SpeedSTR quick qualifiers in the Timed Dashes were Tim Buckwalter (11.952 seconds) and Billy Pauch Jr. (11.978 seconds). Their times put the two wheel-twisters on the pole of their respective heat races, which they won handily.

Dylan Hoch and CJ Fritz paced the Timed Dashes for the All Star Slingshots as the 12 quickest drivers locked themselves into the top 12 starting spots for the Kutztown Komet 100 (top 12 in Timed Dashes were handicapped by three-week point average to determine where they started in the feature).

The focus will then turn to the inaugural World Series of Dirt Track Racing in Selinsgrove, PA, on October 12, 13, and 14. Tobias and Rose, along with the Selinsgrove Speedway promotional team, will produce an incredible weekend of dirt track racing featuring the USAC SpeedSTRs, the 410, 358, and 305 Sprint Cars, Late Models, Street Stocks, 602 Modifieds, and AMA Flat Track Motorcycles over the three-day extravaganza. They will be in action on the spacious half-mile during the day, while the racy little Selinsgrove Raceway Park oval, located inside the big track, will host the nighttime competition. Wingless 600 Sprints, All Star and Junior Slingshots, Karts, and smaller motorcycles will compete at night on the Raceway Park track.

Additional details can be found on the World Series of Dirt Racing page at Facebook.com.