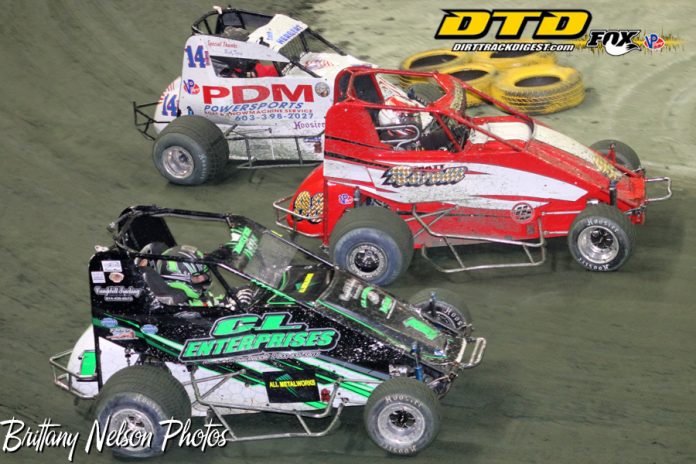 TRENTON, NJ – In the aftermath of the critically acclaimed inaugural, entry blanks for the Second Annual East Coast Indoor Dirt Nationals were recently mailed to the competitors and teams who helped make the first race an artistic success. New entries will now be accepted for the event to be held December 14th and 15th at the CURE Insurance Arena in Trenton, N.J.

All 2017 competitors who intend to race this year and have not returned their completed entry forms should do so prior to the August 31st deadline. At that point new entries will be accepted.

“Pit space is limited at the CURE Insurance Arena,” said promoter Len Sammons. “That’s why we are requesting an early entry return from last year’s drivers. After August 31, we will begin accepting entries from teams that did not compete last year.”

The first official entry returned for the event was received from Whitey Kidd III, the upset winner of the inaugural race last December. Kidd, who qualified through the B-Main and started deep in the field. The 36-year-old Staten Island, N.Y. resident made a late race pass on Collegeville, Pa.’s Alex Bright to win the thriller. Brian Carber of Pipersville, Pa. passed three cars in the final corners to end up third with USAC Sprint Car series rookie Tim Buckwalter and a very exciting Austin Quick rounding out the top five.

One of the reasons for the success of the race was the quality of the racing thanks to an unbelievable dust free banked speedway surface built with rich black clay.

“Everyone was thrilled by the track surface which offered three grooves of racing,” said Sammons. “The top drivers thrilled the fans, running low, pounding the outside cushion or sneaking in between. The fast-paced presentation left the fans wanting more. This year’s race should be even better.”

Title sponsorship for the event is currently being sought. Event sponsors Oliver Communications Group, Hoosier Racing Tires, and VP Racing Fuels are returning to back the race once again. Those interested in being a part of this event should contact Danny Sammons at 609-888-3618 or via e-mail at danny@aarn.com.

Information about entering the East Coast Indoor Dirt Nationals, technical and competition rules, and host hotel information have been posted on www.indoorautoracing.com.

Reserved seat spectator tickets went on sale August 16 and are available at www.cureinsurancearena.com

A limited amount of premium front-row seats and suites are available for each night. Saturday’s front row seat will also include a special pit area tour prior to the start of racing action.

Racing starts at 7PM on Friday and 5PM on Saturday.