KUTZTOWN, PA – It’s less than four weeks away…the 2019 season opener at Championship Energy Action Track USA on the Kutztown Fairgrounds. When the Goldie & Elton Meitzler Memorial goes green on Mother’s Day, Sunday May 12, a familiar face will once again buckle himself into a USAC All Pro SpeedSTR.

Frenchtown, NJ’s Billy Pauch, the 2016 SpeedSTR point champion at the Berks County oval and third on the all-time SpeedSTR win list at Action Track USA (with ten victories) returns to the seat of a potent Mike Heffner-owned racing machine. Pauch has indicated that he will compete in the first two events of the new campaign, along with most of the other SpeedSTR races on this year’s schedule.

Even though he has not competed regularly at AT USA since his championship season, Pauch’s list of accomplishments in the SpeedSTR division is impressive. He won the Meitzler Memorial in ’14; he was also the very first winner of the Flyin’ Farmer 40 in 2013. He is a three-time victor in the Ronnie Tobias Memorial races, and he triumphed in the Kutztown Fair Week Nationals in 2016. The one lucrative victory that has eluded him – so far – is the $5,000-to-win Dick Tobias Classic, and there’s no doubt that Pauch has that event, set for Sunday, May 19, circled in red on his personal racing calendar.

Pauch, who has already tasted victory this season in the Doug Hoffman Memorial race for dirt Modifieds at NJ’s Bridgeport Speedway, will be a teammate to his son, three-time and defending SpeedSTR point king Billy Pauch Jr. Both father and son will gas SpeedSTRs owned by Heffner in the class that will see an infusion of top notch talent when they assemble on the Kutztown Fairgrounds on May 12.

Both members of the Pauch family will face stiff competition from the likes of Rick Eckert, Briggs Danner, Matt Westfall, Tim and Steve Buckwalter, the return of Gary and Kyle Hieber, Tyler Ross, Chase Dietz, Trevor Kobylarz, and a host of other wheel-twisters.


Opening Day, May 12, will begin with an afternoon practice session that is open to all divisions scheduled to compete at Action Track USA during the ’19 season. Gates will open at 12 noon and cars will take to the track from 1 p.m. to 4 p.m.

The cost to practice is $25.00 per car. Everyone entering the pits needs to purchase a pit pass at regular price however…the pit pass is good for both practice and the Goldie & Elton Meitzler Memorial that evening.

It should be noted that practice is limited to a specific number of cars and will be assigned on a first-come, first-serve basis. Race teams need to contact Action Track USA if they plan to attend the practice session. Practice reservations can be made by sending $25 to Action Track USA (along with name, car number, and division) at 52A Woodside Ave., Temple, PA 19560.

Following the May 12 Meitzler Memorial Opener, the 7th Annual Dick Tobias Classic for SpeedSTRs will highlight the second Sunday of competition on May 19, with the 75-lap headliner paying a hefty $5,000 to the winner. Just like they will on Opening Night, the Hyper Racing 600 Sprints and All Star Slingshots will join the USAC All Pro SpeedSTRs on the 19th.

The 600 Sprints take center stage on Memorial Day Monday, May 27, with the running of the annual King of No Wing Shootout. The 40-lapper pays $1,000 to win (with Gambler’s Fee) and features four different winners in the four years of its existence. The SpeedSTRs and All Star Slingshots will also be in action in this holiday “showdown at sundown.”

The excitement continues to build as the new season looms closer and closer…it will soon be time to “Spray the Clay at Action Track USA”, where the superstars come to race! 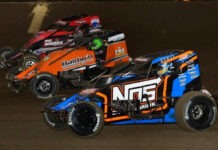 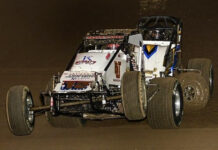 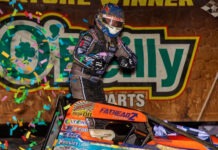