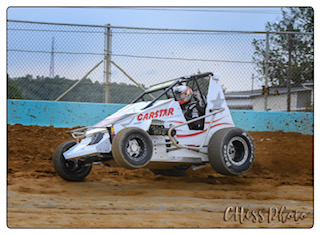 KUTZTOWN, PA – What can we do to turn Mother Nature into a race fan?

That seems to be the million-dollar question asked by many tracks, racers, and fans right now as ol’ Ma Nature put an end to several racing programs over the past weekend (again), including Sunday’s season opening Goldie & Elton Meitzler Memorial at Kutztown’s Championship Energy Action Track USA.

The 2019 campaign will now kick off this Sunday, May 19, with the seventh annual Dick Tobias Classic, a 75-lap affair for the USAC All Pro SpeedSTRs that pays a whopping $5,000 to the winner.

All of the past winners of the Dick Tobias Classic are planning to be in the field this Sunday. Rick Eckert (2013), Brad Brightbill (2014), and Tim Buckwalter (2018) will attempt to win their second 75-lap Tobias Classic. No one, however, has had more success in the lucrative long distance event than three-time and defending SpeedSTR point champion Billy Pauch Jr. “The Kid’s Kid” has triumphed in the race dedicated to the memory of Dick “Toby” Tobias on three occasions (2015, and twice in 2017 – the race was rained out in ’16 so it was held two times the following season).

There will be a large contingent of SpeedSTR competitors looking for their initial victory in the prestigious event, with many of them bringing top-notch pedigrees to the Berks County oval. “The People’s Champ” and USAC star Dave Darland of Kokomo, IN, will be flying in and competing in a SpeedSTR. Darland earned a fourth-place finish in his only Action Track USA start in 2018.

Billy Pauch Sr., the 2016 point champ, returns to SpeedSTR wars this year…and a victory in the Dick Tobias Classic is one of the few blemishes on his stellar racing resume`. Sprint Car standout Chase Dietz , last year’s four-time winner Briggs Danner, “the Flyin’ Buckeye” Matt Westfall, and “the Royersford Rocket” Steve Buckwalter are just a few of the other challengers for Sunday’s big $5,000 paycheck.

May 19 will begin with an afternoon practice session that is open to all divisions scheduled to compete at Action Track USA during the ’19 season. Gates will open at 12 noon and cars will take to the track from 1 p.m. to 4 p.m. The cost to practice is $25.00 per car. Everyone entering the pits needs to purchase a pit pass at regular price, however…the pit pass is good for both practice and the Dick Tobias Classic that evening.

After a break following the test n’ tune session, pre-race warm-ups will get underway at 6:15 p.m., followed by the National Anthem and qualifying heats for all three divisions. Grandstand gates open at 5 p.m.

It should be noted that the afternoon practice is limited to a specific number of cars and will be assigned on a first-come, first-serve basis. Race teams need to contact Action Track USA if they plan to attend the practice session. Practice reservations can be made by sending $25 (along with name, car number, and division) to Action Track USA at 52A Woodside Ave., Temple, PA 19560.

The Hyper Racing EVO Injection 600 Sprints and All Star Slingshots will join the USAC All Pro SpeedSTRs on the May 19th menu of high speed adventure. Adult General Admission is $20 for the Tobias Classic, with Senior Citizen tickets $18. Youth between the ages of 6 and 12 are priced at $8, and children under the age of six are free.

The 600 Sprints take center stage on Memorial Day Monday, May 27, with the running of the annual King of No Wing Shootout. The 40-lapper pays $1,000 to win (with Gambler’s Fee) and features four different winners in the four years of its existence. The SpeedSTRs and All Star Slingshots will also be in action in this holiday “showdown at sundown.”

The season continues with a four division program on Sunday, June 2nd, as the Junior Slingshots join the SpeedSTRs, 600 Sprints, and All Star Slingshots.

The excitement continues to build as the new season is less than one week away…it is almost time to once again “Spray some Clay at Action Track USA”, where the superstars come to race!