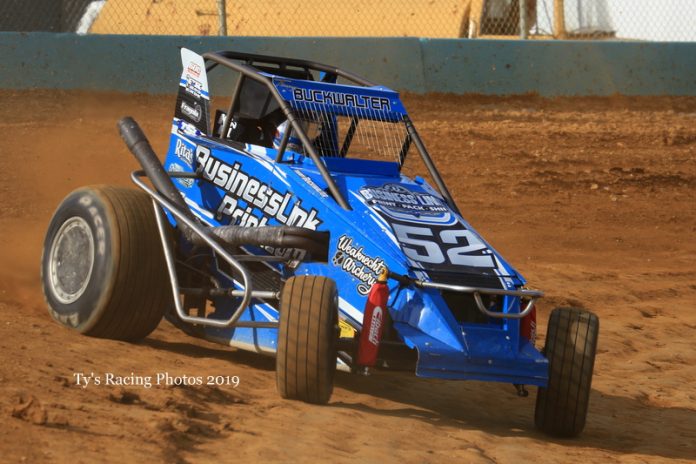 KUTZTOWN, PA –  Douglassville, PA’s Tim Buckwalter is very appreciative of the effort put forth by his crew, and he knows how to reward them and keep their morale high. “Winning keeps ’em pumped up,” summarized Buckwalter after his victory in Sunday night’s Flying Farmer 40 for the USAC All Pro SpeedSTRs at Championship Energy Action Track USA on the Kutztown Fairgrounds.

Kenny Miller III triumphed in the May 19 make-up feature for the Hyper Racing EVO Injection 600 Sprints to begin the huge evening of high speed adventure, while New York’s Damon Paul claimed victory in the regularly scheduled main for the 600’s. Tanner VanDoren notched the win in the 30-lap feature for the All Star Slingshots.

Action Track USA swings open the gates once again on Wednesday, June 12, with a four division program featuring the USAC All Pro SpeedSTRs, Hyper Racing EVO Injection 600 Sprints, All Star Slingshots, and the Junior Slingshots will make their first appearance of the season at the Berks County oval. It’s Glick Fire Equipment First Responders Night presented by Belfor Property Restoration, and all First Responders who show a current and valid I.D. will recived free admission to the grandstand. Belfor Property Restoration will have a display set up behind the grandstand with raffle prizes for the fans. Warm-ups begin at 6:15 p.m. with qualifying events getting underway immediately following the hot lap sessions. Adult General Admission is just $14 with a discount for Senior Citizens.

The seventh edition of the Flying Farmer 40 produced the event’s first repeat winner in Tim Buckwalter, who followed up his 2017 victory in the 40-lap main that paid $3,000 to win. The triumph also moved Buckwalter within one of the all-time leader in SpeedSTR wins at Action Track USA, Billy Pauch Jr. The Milford, NJ driver has 16 career victories to Buckwalter’s 15.

Sunday’s race began with Ohio’s Matt Westfall setting the pace from his pole starting position. Fourteen-year-old Alex Yankowski put the pressure on Westfall, executing several slide jobs on the leader in the early stages of the 40-lapper, only to have Westfall cross him over and re-pass to go back in front. Tim Buckwalter, meanwhile, steadily maneuvered his way forward from his starting spot on the outside of row five. Buckwalter was up to fifth when, under caution with 11 circuits complete, race leader Westfall suddenly headed for the pit area.


Westfall’s demise handed the point to Yankowski, and it set the stage for one Jim-Dandy of a battle for the top spot. When the race went back to green, T. Buckwalter quickly blasted into the runner-up position. He and Yankowski went side-by-side in a duel for the lead, then waged war in a slide fest on laps 14 through 18. Yankowski then separated himself from Buckwalter by a few car lengths, but a yellow flag erased his advantage with 18 tours remaining. On the restart, Buckwalter zipped past Yankowski to grab the top spot; a position he would not relinquish for the remainder of the Flying Farmer 40.

The next dozen or so laps provided a tremendous tussle for positions two through seven as Matt Janisch, Briggs Danner, Stephen Nederostek, Billy Pauch Jr., Yankowski, and Trevor Kobylarz used every inch of the race track to swap positions and run two and three-wide. Janisch eventually weaved his way to second and Danner, overcoming an early race incident that led to a quick pit stop under yellow, battled Pauch Jr. and Yankowski for third.

Tim Buckwalter cruised to the victory over Janisch, with Pauch Jr. (who was also collected in an early race skirmish and had to come from the rear), Danner, and Yankowski completing the top five.

In the Hyper Racing EVO Injection 600 Sprint main that was postponed by rain on May 19, Birdsboro’s Kenny Miller III jumped out to the lead after starting on the pole. Eddie Strada and Damon Paul chased Miller, eventually engaging him in a spirited scuffle for the race lead during the middle stages of the 25-lapper. Miller’s teammate, Brendan Bright threaded his way to fourth at the halfway point, but the front-running trio kept the battle for the win to themselves. Miller pounded the cushion and Paul followed in his tire tracks, while Strada worked the low groove and repeatedly attempted to slide up in front of the leader.

Miller eased ahead as Strada and Paul fought for the runner-up slot with the race winding down. When the checkered flag waved, Miller cashed in for his first Action Track USA triumph of the season by a half-second over Paul, who nipped Strada for second-place money. B. Bright wound up fourth and Billy Pauch Jr. finished fifth.

Jacob Balliet set the pace in the early going before Will Butler and sixth-starting Damon Paul caught him and began their assault on the leader. Running three abreast and switching lanes, the three young throttle jockeys battled furiously for the race lead, while Eddie Strada and 11th-starter James Morris went wheel-to-wheel for fourth. Paul darted into second on a restart with ten to go, pulling Strada with him as they passed Butler. Balliet, who drove a great race out front, fended off the challenges of Paul until the No. 144 pulled even with him, then shoved his nose ahead of the No. 22 to lead at the line when lap 18 was scored. The yellow lights flashed on at that point, setting up a green-white-checkered scenario to decide the outcome. Paul motored away on the restart and survived a pair of late restarts to secure the victory.

Billy Pauch Jr., who lined up 20th for the original green, emerged from a three-wide fight on the final trip around the clay to finish second with Morris settling for third and Strada falling to fourth. Kyle Spence wound up fifth. Tim Buckwalter climbed from 14th at the start to finish sixth, and Kenny Miller III sliced his way from 25th to seventh in the 25-lap feature.

Kunkletown’s Tanner VanDoren started second in the 30-lap main for the All Star Slingshots and grabbed the lead from pole sitter Scott Neary on lap one. One lap after the halfway point, Justin Thompson slipped by VanDoren to take the lead, but a restart with ten revolutions remaining changed the entire complexion of the race.

Thompson led the field to turn one, but then spun and handed the top spot back to VanDoren. Ninth-starter Dylan Hoch, already a two-time winner this season, was now sitting in third, and he made quick work of Neary when the race went back to green. Jared Silfee followed Hoch by Neary and it appeared the two former track champions were getting ready to tag-team VanDoren for the top spot. Tanner was up to the challenge, though, maintaining a three to four car length advantage over Hoch, who had to play defense against Silfee in order to hang on to the runner-up position.

At the finish, it was VanDoren over Hoch and Silfee, with Neary and Brett Bieber rounding out the top five.

On the 19th, the USAC SpeedSTRs will finally make up the 75-lap Dick Tobias Classic that was rained out after qualifying on May 19. The SpeedSTRs will then compete as part of the rescheduled Goldie & Elton Meitzler Memorial along with the 600 Sprints and All Star Slingshots. For the first time ever at Action Track USA, the 600’s will compete with wings bolted to the top of their rollcages on June 19. The Meitzler Memorial, which typically serves as the season opener at the oval nestled into the Kutztown Fairgrounds, was postponed by rain on Sunday, May 12.

With the switch to Wednesdays, it’s time to experience a Midweek Motorsports Adrenaline Rush at Championship Energy Action Track USA…where the Superstars come to race! 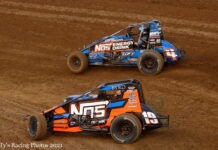 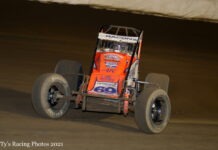