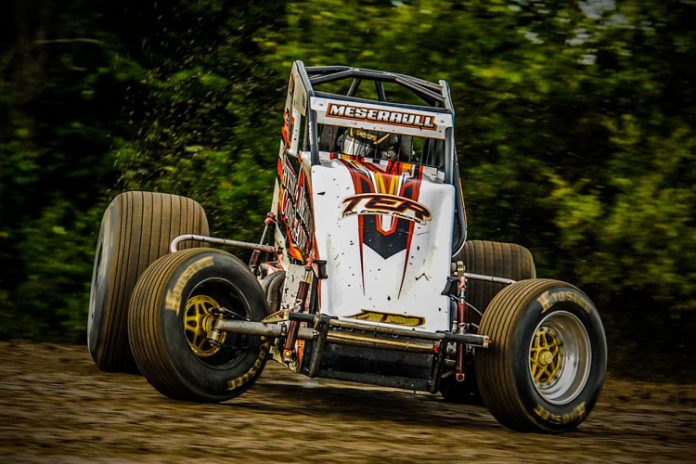 Andy Bishop of Gas City posted his seventh win at the quarter-mile clay oval this year too. His came in the street stock feature, which carried an increased purse and a $1,200 top prize.

Chett Gehrke of Louisville, Ky. solidified his role as the man to beat in USAC SpeeD2 midget action at Gas City, as he remained undefeated in that series’ third appearance at Gas City so far this year.

In other action, Dylan Woodling of Warsaw, Ind. posted his second UMP modified feature victory of the season at Gas City.

James Headley Jr. of Wabash, Ind. collected his fourth hornet feature win of the season over his father, James Headley of Marion, Ind., who has five feature triumphs at the track so far this year. The Headleys collected the $300 bounty on them, as no driver beat them in the three-week period it was offered.


Meseraull started fourth in the 25-lap sprint feature in Tom Eades’ DRC sponsored by Physical Medicine Consultants and powered by a Stensland-prepped Chevy engine. Polesitter Dustin Smith of Russiaville, Ind. led the first three laps before Meseraull got by him on the high side in Turn 2. Smith battled back in the low groove to lead lap five and six, but Meseraull powered around him on lap seven and led the rest of the way.

Meseraull was able to extend his lead, but it evaporated three times due to cautions. The first was with 12 laps down when Tyler Kendall of Indianapolis spun in Turn 3; the second was with 15 laps down when Tony Main of Farmland, Ind. spun in Turn 2 and Aaron Davis of Windfall, Ind. had a flat tire. The final yellow flew for debris with 17 laps down, but Meseraull fought off all challengers and weaved through lapped traffic to post the victory.

Smith, a two-time BOSS series champion, finished second, while Cole Ketcham of Muncie, Ind. placed third. Carson Short of Marion, Ill. was fourth and Jarett Andretti of Indianapolis came home fifth, right in front of Travis Hery of Columbus, Ohio, who was regrouping after a nasty flip here on Aug. 2.

The second half of the top 10 got scrambled on lap 24 after multiple cars made contact on the backstretch. The scuffle didn’t bring out a yellow but Matt Westfall of Pleasant Hill, Ohio got the worst of it, as he was running seventh but ended up in the infield as the checkered fell.

Gehrke started on the pole for the 20-lap midget feature, out-dragged Midwest Thunder point leader Aaron Leffel of Springfield, Ohio into Turn 1 on the first lap, and led every lap in the No. 93C. That feature was halted with one lap down when Adam Schmenk of Columbus Grove, Ohio flipped in Turn 2, but luckily he wasn’t hurt. The rest of the feature went non-stop, and Gehrke’s biggest challenge was getting through lapped traffic. Leffel finished second followed by Alex Watson of Columbus, Ohio. Stratton Briggs of Anna, Ohio finished fourth and Thomas Briggs came from 11th in the 23-car field to finish fifth.

Woodling led all 20 laps of the UMP modified feature from the pole. He had a half straightaway lead over defending track champion Dillon Nusbaum of Warsaw, Ind. when three cars crashed in Turn 2 with eight laps down to bring out a yellow. Another yellow for Bill Griffith’s spin in Turn 2 with 19 laps down gave his rivals one last chance, but Woodling was not to be denied. Four-time winner Derek Losh of Rensselaer, Ind., who started seventh, passed Nusbaum with a move to the outside as they were going through Turn 4 working lap 11 to nab the runner-up honors. Nusbaum held on for third. Tony Anderson of Lima, Ohio placed fourth and Todd Sherman of Merriam, Ind. finished fifth.

Headley Jr. started fourth in the 15-lap hornet feature but vaulted into the lead at the start of that race. His dad started sixth but was second by lap four, and they finished in that order. There was a good fight for third place among three drivers who are all from Columbia City. Jacob Beard eventually got that spot followed by polesitter Alyssa Clark and Randy Brommer.

Ron Flaugh of Converse, Ind. and Beau Cooley of Wheatfield, Ind. led the 15-lap street stock feature before Bishop took command working lap five by slipping under Cooley in Turn 4 after running side by side with him for awhile. Bishop went on to earn the big check with the Thompson Trucking No. 14. Cooley took second place and Flaugh finished third. Mike Fincher of Rochester, Ind. was fourth and Owen Wells rounded out the top five.

Intermission was especially memorable for USAC SpeeD2 midget driver Bryce Dues of Minster, Ohio. He was brought to the frontstretch on the pretense of honoring him for his military service, as he was a corporal in the United States Marine Corps and served six years with the Fourth Law Enforcement Battalion, Charlie Company, as a military police officer. He was also deployed to the country of Jordan during Operation Eager Lion to do integrated armed forces training with the Jordanian armed forces and the British Army.

While Gas City I-69 Speedway certainly thanks Dues for his service, there was another reason that he was called to the frontstretch during intermission. Dues wanted to ask his girlfriend to marry him in front of the Gas City I-69 Speedway family. With his midget in the background he got down on one knee on the quarter-mile dirt oval and presented a ring to Hunter LeAnn Knouff of Sidney, Ohio, who said “Yes!” The track management and fans wish the happy couple the best on their upcoming nuptials.

The kids on hand liked intermission too, because it featured the Candyman’s “Kids’ Coin and Candy Scramble.”

Despite an action-packed, five-division program, the well-run show was over by 10:50 p.m.

Gas City won’t be in action on Friday, Aug. 23, but it will once again be bright on Friday, Aug. 30 for the “King of the Wings” program. That show features the FAST on Dirt winged 410 sprints, UMP modifieds, street stocks and hornets.