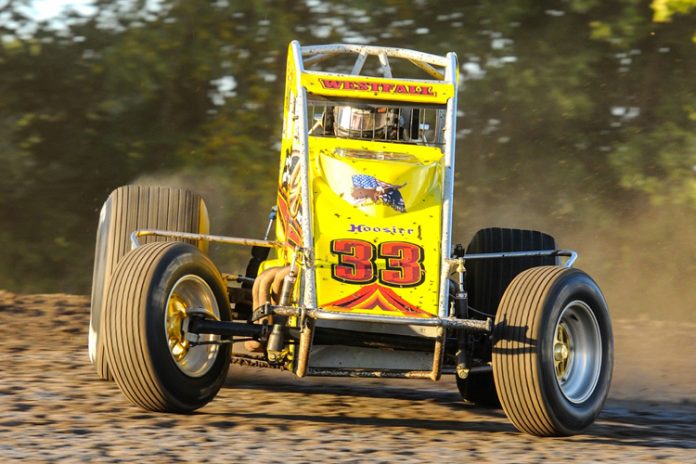 GAS CITY, IN – Todd Sherman of Churubusco, Ind. spurned superstitions and won the 30-lap “Mod Madness” feature for the American Ethanol Modified Tour Presented by Allstar Performance at Gas City I-69 Speedway on Friday the 13th under a full moon. “The Shermanator” earned $1,500 in topping 30 entries, which was the largest winner’s check in modified competition ever at the quarter-mile dirt oval.

Twenty-three USAC Midwest Thunder SpeeD2 midget drivers signed in, and Stratton Briggs of Anna, Ohio put an end to Chett Gehrke’s domination of that division at Gas City this season. Briggs won the 20-lap midget feature after Gehrke, of Louisville, Ky., won three similar races earlier this year but finished fifth during the final Friday night show of the year.

James Headley Jr. of Wabash, Ind. was forced to start at the rear for the hornet feature since he won the last three hornet main events at Gas City, but it didn’t matter as he made it four in a row in that 15-lapper to close the show. It was his seventh feature victory of the year at Gas City.

The $500 prize money was given to the minister who brought the most fans, which turned out to be Pastor Riley anyway. After climbing down from the hood of his school bus after his jubilant victory lane celebration he told the large crowd on hand that he’d donate the money to a veterans’ charity.

The modified feature got off to a slow start due to numerous yellows and reds, but in the end it was an extravaganza of “door handle to door handle” racing despite the fact none of the cars actually have doors or door handles. Andy Bishop of Gas City led the first three laps before Zeke McKenzie of Claypool, Ind. passed him on the outside in Turn 4 on a restart. Bishop used the inside to take the lead back on lap five, McKenzie got him back to the inside on the frontstretch on lap six, and then Bishop regained the lead with a move to the inside in Turn 3 working lap seven before another yellow waved.

Bishop led through lap 11 while “The Shermanator” was working his way towards him. Nathon Loney of Danville, Ohio, who is also a basketball coach, was also on the move, and he passed both Bishop and Sherman working lap 12 to nab the lead before Bishop got it back on the backstretch working lap 14, right before McKenzie dropped out. Two laps later the raging battle got even hotter, and Sherman passed Bishop for the lead working lap 18 with a move to the outside in Turn 4.

Sherman led the rest of the way in the Ferris Racing No. 65, which is sponsored in part by Pro Strip Powder Coating, TeamSE.com, Sherman Enterprises, Zamp Helmets, All Star Performance, Ztech and All Pro Towing.

Loney dropped out with 21 laps complete, and Derek Losh of Rennselaer, Ind., who has six modified feature victories this year at Gas City, passed Bishop for second on lap 22. Despite another caution that set up a five-lap shootout at the end, Sherman had a 1.023-second lead over Losh at the checkered. Dylan Woodling of Warsaw, Ind. finished third despite getting airborne on lap 16. Behind him was a four-car battle for fourth at the line. Bishop ended up in that position, while Dillon Nusbaum of Warsaw, Ind., the track’s defending modified champion, rounded out the top five.

Scotty Weir of Marion, Ind. started second in the 20-car sprint car feature, passed polesitter Shane Cottle of Kansas, Ill. for the lead in Turn 2 on the first lap, and led the first 17 laps of that 25-lapper. By lap 12 the top four drivers — Weir, Cottle, Scott Hampton and Garrett Abrams —were running in a pack just inches apart.

Cottle dipped under Weir for the lead on lap 18, but two laps later Westfall passed both Cottle and Weir by going low in Turn 4. Westfall had to survive two restarts, including one after a red with one lap remaining when the car of Sterling Cling of Tempe, Ariz. got on its side in a Turn 4 tangle that also involved Adam Byrkett of Burnettsville, Ind. and Anthony D’Alessio of Gas City. Luckily no one was hurt.

Westfall stuck to the low side and took the checkered with Cottle, Hampton, Weir and Dallas Hewitt of Fletcher, Ohio following right behind him.

The winning car is fielded by Ray Marshall Motorsports of Forest, Ohio. It’s a Maxim chassis powered by a Hampshire-prepped engine. The team is sponsored in part by Buckeye Machine, DPI Ink and Leary Shock Technology. Phil Westfall is the winning chief mechanic.

Thomas Meseraull of Waveland, Ind., who has seven feature victories so far this year at Gas City, had to qualify through the B main, which he won. He finished ninth in the feature.

Polesitter Aaron Leffel of Springfield, Ohio, who is leading the USAC Midwest Thunder point standings, led the first nine laps of the SpeeD2 midget feature until Briggs, who started right behind him in third, got on top of Leffel’s car’s side in Turn 4. Brigg’s No. 71, which is sponsored by SBM Racing Suspension Specialist and Armor Coat Ceramic Header Coatings, led the rest of the way. Leffel finished second, taking the checkered flag 3.493 seconds after Briggs did.

In the second half of the race the best battle was for third. It went to Nate Foster of Greenwood, Ind. followed by Gunnar Lucius of Delphos, Ohio and Gehrke.

Charlie Teegarden of Marion, Ind. led the first lap of the hornet feature before Jacob Beard of Columbia City, Ind. passed him and led the next seven laps. Although Headley Jr. started in the last row, he was in the top five by lap two, the top three by lap six, and second by lap seven. Headley Jr. took the lead from Beard with a move to the outside as they were entering Turn 3 working lap eight, and went on to a comfortable victory in his No. 00, which is sponsored by Dudding’s Heating and Cooling, Garriott Electric, Edwards Automotive and TJR Trucking.

Dalton Bishop of Gas City drove James Headley’s “outlaw” car to a second-place finish after starting tenth. Randy Brommer finished third and Teegarden placed fourth. Beard took fifth minus a right-rear wheel, which had flown off his car a lap earlier in Turn 2.

On Thursday, Sept. 26 the track will present the second annual James Dean Classic featuring the USAC AMSOIL national sprint cars, UMP modifieds and mini-sprints. A special event T-shirt similar to last year’s that sold out will be available. Shane Cottle took the lead on the last lap and won by inches over C.J. Leary in the USAC AMSOIL sprint car race at Gas City during Indiana Sprint Week in July. Kevin Thomas Jr. won the inaugural running of the James Dean Classic last year over Leary by only 0.586 of a second.