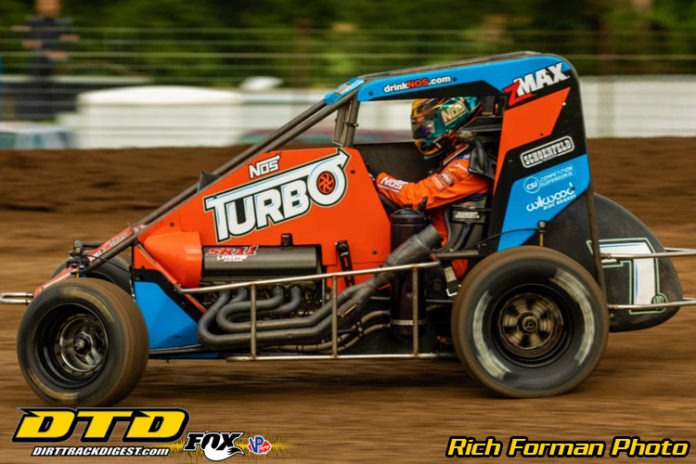 Literally, he was unable to stop as he drove through victory lane without the aid of brakes.

A late caution following a 35-lap green flag run around the 1/5-mile dirt oval, however, nearly thwarted the team’s resilient effort as he withstood a hailstorm of challenges from Buddy Kofoid, then a hard-charging Emerson Axsom, during the final laps to become the first multi-time victor of the Riverside Chevrolet-Buick-Cadillac Midwest Midget Championship presented by Westin Meats & Schmidt’s Sanitation.

In becoming a winner of the event in back-to-back years at Jefferson County after notching victory on the final night of the 2019 event, Courtney scored his 15th career series win, tying himself with Don Branson and Larry Rice for 47th all-time.

For Courtney, whose run of luck in the midget of late included flipping while leading in the Indiana Midget Week finale in June at Kokomo as well as an early race wheel hop 24 hours prior at Jefferson County that derailed his evening early on in Friday night’s feature, he felt as if this was time to prove a point that are still a force to behold.

“Not only for myself but as a team, I feel like we needed this to get our mojo back, so to speak,” Courtney said. “We’ve just been struggling. All Indiana Midget Week, we just didn’t have any speed. Then, we were leading at Kokomo and had an unfortunate end to our night there. Last night, we made it two laps in the feature before something else happened. Tonight, starting on the pole, we were in a good spot. I feel like we capitalized on that. It’s been trying for sure, but that’s what this sport is all about. It’s not always roses, but you try to make the most out of every night you can.”

Courtney, of Indianapolis, Ind., made the most of the night early on as he initially rode the low line to lead lap one before outside front row starter Kofoid crossed over at the stripe and tried to slide by Courtney, now on the top side, into turn one, to no avail, before falling back into line behind Courtney on the high line.

The top-two of Courtney and Kofoid separated themselves from the rest of the field before immersing themselves into traffic by the 10th lap. Courtney expertly executed through traffic as he kept Kofoid at bay through the mid-stages of the 40-lapper.

Kofoid began to dip low to the bottom of turns three and four as he scoured the surface for an avenue past Courtney. Courtney, meanwhile, was in the midst of trying to slide lapped traffic. That briefly bogged down his momentum exiting turns two and four, thus allowing Kofoid a chance to pulley himself back into contention by taking a run at the reigning series champion in turn one on the 25th lap, which came up short of the mark.

Despite the miss, Kofoid simply wouldn’t let Courtney escape, and with 11 laps to go, Kofoid was once again able to pull even with Courtney at the exit of turn four, putting him in a position to capitalize on any potential misstep Courtney was to encounter in the forthcoming laps.

Less than a half lap later, at the exit of turn two, Courtney snagged a piece of the turn two cushion as he slid past Ethan Mitchell to put him a lap down. Kofoid closed the gap to Courtney on the back straightaway and appeared to be setting up Courtney for the slide job in turn three, but the bottom lane was occupied by Mitchell, thus forcing Kofoid to drift back behind Courtney on the high line and negating a possible golden nugget of an opportunity.

Courtney then ably gapped Kofoid as he separated himself once again by more than a second with the aid of traffic. However, with five laps remaining, seventh-running Tyler Thomas coasted to a stop over the top of the turn two banking with smoke and a little bit of flame coming from the Oklahoma driver’s ride, necessitating a yellow following a lengthy 35-lap caution free run.

“I like racing in lapped traffic,” Courtney admitted. “I feel like I have a little bit of an edge on some guys there. I messed up a couple times, but overall I knew if we could stay in lapped traffic, it would bode better for me rather than if we went yellow because you never know what’s going to happen on the restart. Restarts get chaotic, especially when you lose your brakes, it gets a little nerve wracking.”

All race long, the expected showdown for the win was presumed to be undertaken by Courtney and Kofoid. However, Axsom, making just his third career series start, quietly minded his own Ps and Qs on the bottom as he restarted fourth on the lap 36 restart. Axsom quickly disposed of Windom for third off turn two, then as Kofoid slid by Courtney for the number one spot in turns three and four, Axsom rolled the bottom on his own path to the lead by a nose with Courtney in the middle and Kofoid up top, three-wide at the line.

Courtney slid past Kofoid into turn one, then moments later, Kofoid skipped along the curb of turn two and dropped to fifth and out of contention, leaving the race for the lead now as a mono y mono duel between Axsom on the bottom and Courtney up top.

“I knew Buddy was going to be coming there on the restart,” Courtney recalled. “He slid me, I got back by him, then all of a sudden, there’s a guy on the bottom and I couldn’t really see who it was. I thought it was (Tanner) Thorson, but it ended up being Emerson there at the end. When I looked up (at the turn one scoreboard) and saw the 15, I thought, ‘well, that’s not what I was expecting.'”

Axsom’s magnificent drive around the infield tires continued with four to go as tripped the scoring loop two car lengths ahead of Courtney at the line with Thorson now joining the fray just a couple steps behind Axsom on the bottom. Courtney knew his precision on the rail had to be as close to absolutely perfect during the last three lap stretch in order for him to win the deal, as it has to be when taking the long road home.

“I felt like I was getting through one and two pretty good,” Courtney said. “Three and four, I was kind of struggling a little bit. I knew I could get through one and two, but just had to maintain over there in three and four and I did. Luckily, we got to the finish line first. It’s still nerve wracking; you don’t know how good that guy is going to hit the bottom on that last corner, especially if you mess up a little bit. So you just try to be perfect, but it’s really hard to be perfect.”

It took 39-1/4-laps for Courtney to find that final semblance of separation that was required as he launched off turns one and two on the 40th and final lap to reign victorious by a margin 0.434 seconds over Axsom, Thorson, Windom and Kofoid.

Axsom (Franklin, Ind.) nearly pulled off the miraculous late-race charge to the front of the field in his Petry Motorsports/Keizer Aluminum Wheels – Mobil 1 – FK Rod Ends/Bullet/Speedway Toyota. Yet, the 2nd place finish was his result, the best of the 15-year-old driver’s career, as he chose his own distinct path along the way after earlier driving from 7th to 1st in the first heat race.

“I saw everyone else on the top, and I wanted to go up there,” Axsom relayed. “We weren’t terrible up there in lapped traffic but we weren’t falling back on the bottom, so I tightened up the car with the shocks, which definitely helped on that last restart.”