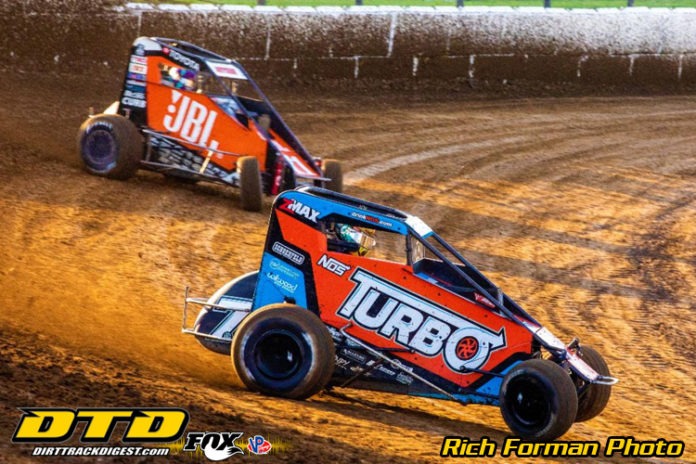 CANEY, KS – When it rains, it pours. Sometimes that old idiom may involve negative characteristics, but there’s also the positive side of the phrase that Tyler Courtney has experienced of late, a far cry from the former which consumed him prior to his back-to-back USAC NOS Energy National Midget victories.

The latest came Sunday night in the series debut at Caney Valley Speedway in Kansas where the Indianapolis, Ind. racer nearly parked it on two separate occasions early before regathering, dusting himself off and trying again to roar back through the pack with a winning pass of Tanner Thorson four laps from the finish to score his third series victory of the year aboard his Clauson-Marshall Racing/NOS Turbo – ZMax/Spike/Stanton SR-11x.

Courtney admitted they had him in the first half, he wasn’t going to lie. But the second half of the 30-lapper was all his as he snared his second victory in as many nights, and the 16th of his career to move to 40th all-time past Don Branson and 1973 USAC National Midget champ Larry Rice.

Courtney’s consecutive victories are a welcome reprieve from two-straight finishes of 21st or worse that lingered itself into the beginning of Mid-American Midget Week. Now he finds himself and his team back in championship form that won them a series title one season ago.

“This sport is probably the most humbling of any sport you could possibly do,” Courtney said. “You have the highest of highs and the lowest of lows and you have to ride those highs as long as you can and hopefully not let the lows get you down too badly.”

Courtney started third while series Rookie Kaylee Bryson led the opening lap after dicing it up with Thorson off turn four to head the field on lap one. Thorson ducked under Bryson on the bottom of the first turn to secure the lead where he’d remain for much of the duration.

On multiple occasions, Courtney found himself completely sideways between turns one and two, nearly coming to a stop during both instances before continuing onward, but not before dropping like a stone to the latter half of the top-ten running order, giving him little hope that a victory was still in the cards.

“I thought we were done about lap 10 of that race,” Courtney professed. “I just couldn’t quite get through (turn) one there. Every time I thought I’d do something right, it ended up being the wrong move. Unfortunate for those guys (who contacted his half-spinning car) but it helped me with a couple of guys there to straighten me out. I finally just started slowing down and hitting the bottom of one and two instead of trying to carry my momentum through. That ended up paying huge dividends at the end of the race. I was about the only guy who started doing it and I was able to get a good run off two and down into three and four to slide those guys and put ourselves in a good spot to win that race.”

As Courtney found just a little bit of variation on his line than everybody else, Thorson incrementally elongated his lead over Buddy Kofoid in second place throughout the early stages of the second half. Kofoid, the leading series Rookie in the 22-car field, took a run at Thorson for supremacy on a restart with 11 laps remaining. However, Thorson was able to thwart the challenge of Kofoid, who slipped back, while Courtney scooted to second past Kofoid on the 22nd lap.

On a lap 24 restart following a Daison Pursley turn four spin, the top-three of Thorson high, Courtney middle and Kofoid low became entrenched in a three-wide tussle for position in turn four from which Thorson emerged retaining the lead with Courtney and Kofoid slotted just behind.

One lap later, Courtney took his uppercut to Thorson with a turn three slider, ripping past for the lead momentarily as Thorson darted back underneath at the exit of four, with the two banging wheels, which sent Courtney briefly squirrely as both continued onward without too much detriment. Moments later, at the exit of two, Thorson slid up off the bottom all on his own, allowing Courtney to sprint by underneath. However, it was all for naught as Tyler Thomas spun in turn two to bring out the yellow.

Courtney brought his hard hat and went straight back to work on the resumption of lap 27, recreating the same turn three slider he made just before the yellow. This time, the move stuck, with Courtney snagging the lead from Thorson who followed the procession into turn one behind Courtney but got sideways on entry and was plowed into by the next three cars in line driven by Tanner Carrick, Kofoid and Fatheadz Fast Qualifier Cannon McIntosh, running 3rd, 4th and 5th at the time, all of whom stopped.

With a little bit of a sigh of relief in the afterglow of the aftermath, Courtney closed out a performance in which he became a USAC NOS Energy Drink National Midget winner at a first-time series venue for the second time this season following his late-May victory at Port City Raceway in Tulsa, Oklahoma.