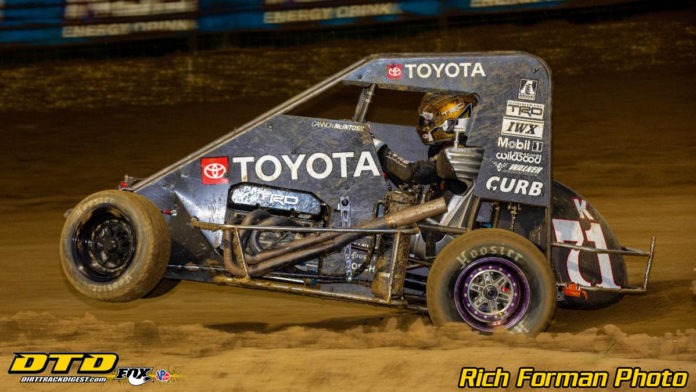 SWEET SPRINGS, MO – In the moments leading up to the final lap, Cannon McIntosh figured a chance at victory was just out of the realm of possibility in Friday night’s USAC NOS Energy Drink National Midget feature at Missouri’s Sweet Springs Motorsports Complex.

Yet, all it takes to win is to lead just one inch, a foot, a yard. A valiant effort by the 17-year-old Bixby, Okla. native saw McIntosh erase a late-race one-second lead held by Chris Windom as Windom dealt with a throng of traffic on the final lap. McIntosh ripped around the outside of turn four to nip Windom at the stripe by a half-car length for the victory – the only corner, the only lap McIntosh led throughout the evening.

“I thought when he got to traffic, I was too far out of reach,” McIntosh admitted. “We got the white flag and I went into one as hard as I possibly could and kind of gained on him. He went to the bottom and followed the lapped car and I just sailed it off into three and four through the middle as hard as I could, and it was just enough to get him.”

McIntosh’s triumph was the second of his USAC National Midget career, and first outdoors, after winning his first contest 18 months earlier indoors at the Southern Illinois Center in Du Quoin.

Moreover, since joining the Keith Kunz/Curb-Agajanian Motorsports juggernaut at the beginning season, the team as a whole had yet to win a USAC race, last doing so with the series in July of 2019, 14 months ago. The victory made it three wins for the KKM team in three tries, keeping their winning tradition alive at the 1/6-mile dirt oval after previous victories with Logan Seavey in 2018 and Tanner Carrick in 2019.

“We’ve been winless all year with USAC, and I saw that stat today, and I was like, ‘well, that’s some pressure,'” McIntosh noted. “It motivated me to keep the streak going for the team. We were all wondering if we were going to get one this year. It’s finally here, but I’m hoping that just opened the lid for a ton more to come. I’ve been striving as hard as I can to get that win and everyone on this team has been working hard to make that happen. Tonight, the cards finally laid into place.”

Starting 13th in his Keith Kunz-Curb-Agajanian/TRD – Mobil1 – JBL Audio/Bullet By Spike/Speedway Toyota was McIntosh, who made his way into ninth on the opening lap, then gained one additional position per lap until reaching the top-five on lap five and the top-three on the seventh circuit.

However, in the midst of McIntosh’s surge was a bit of mayhem, particularly on an opening lap tangle when contact on the back straightaway between Buddy Kofoid and Thomas Meseraull sent 6th starting Kofoid sideways in front of 9th starting Justin Grant. Grant dug in the nose and somersaulted twice before landing hard on the tail tank as Chris Windom drove underneath the airborne Grant. Meanwhile, Kofoid barrel-rolled three times after the contact. Both Grant and Kofoid were okay, but out of the race as a result.

Local talent, Clinton Boyles of Greenwood, Mo., led the opening lap from his outside front row position as he aimed to become the first Missouri-born winner with the USAC National Midgets since Steve Gennetten in 1989. Yet, reigning Sweet Springs winner Tanner Carrick rode the bottom past pole sitter Emerson Axsom and Carrick to lead the second lap.

On lap four, Boyles’ bid for victory fell to the wayside as he slowed to a stop with mechanical trouble. He’d return to the lineup briefly but dropped out by lap eight after a turn four incident with Ethan Mitchell, ultimately finishing 21st.

Carrick led for much of the first half, displaying resiliency in holding off 7th starting Windom for many of those laps before Windom snagged the position with a turn one slider on the 17th lap. Carrick dropped back to 9th at the checkered but remained the only driver to lead laps and finish inside the top-ten during all three previous USAC National Midget features at Sweet Springs dating back to 2018.

The driver mimicking Windom’s moves was McIntosh who repeated Windom’s same turn one slider and turn three door close a lap later on the 18th go-around to slot into second and give chase to Windom.

Moments later, the second red flag of the feature occurred when series Rookie Chase Johnson, running 10th at the time, flipped at the entrance of turn three. He was okay.

From the restart onward, McIntosh’s pursuit of Windom proved futile as Windom opened up his lead to over a second at the drop of a hat once racing resumed with a clear track ahead, running the cushion between turns one and two and on the bottom in turns three and four.

With five to go, McIntosh had managed to knock a tenth off Windom’s one second lead, but time was running short. However, lapped traffic loomed, forcing Windom to have to untangle himself from a web in order to find victory for a fourth time with the series in 2020.

On the final lap, McIntosh quickly ate up the ground between he and Windom and was just three car lengths back in turn three when Windom went to the bottom at the entry to the third turn, slotting in between the cars of Mitchell and Cole Bodine running at the tail.

McIntosh staked his car in the middle groove, unfettered without any obstruction, and admitted that he was “pretty much swinging for the fences” at that moment, gassing his machine around Windom on the outside of turn four, beating Windom to the stripe to earn the victory over Windom, Tyler Courtney, Tanner Thorson and Thomas Meseraull.

What it takes to win is to be there in the end, and ultimately lead the most important lap, the final one, even it takes 29 and three-quarters of a lap to get there. That’s what counts the most in the stat sheet and in the wallet.

“I was making a run there; I made mistakes down there in one and two, then he’d pull away, I’d get him back, then he’d pull away again,” McIntosh remembered. “I didn’t think there was going to be a chance; the bottom was the preferred line and he moved down there and got stuck. I didn’t think the middle was going to hold me, but I think it threw enough (dirt) up there to where I could get enough momentum to get around him.”

Windom gained three points to up his lead to 34 in his pursuit of the USAC NOS Energy Drink Midget National Championship, finishing in the runner-up position in his Tucker-Boat Motorsports/NOS Energy Drink – Pristine Auction/Spike/Speedway Toyota. However, points were not of the utmost concern to the Canton, Ill. driver in the immediate moments following the race.

“I don’t even think about points after leading the whole race like that and not getting the win,” Windom admitted. “I felt like we were good the whole time. I got to lapped traffic there late and wasn’t really sure where to go. I hadn’t run the top in three and four the whole race. I kind of got forced up there and started missing my marks in one and two. I went to the bottom on the last corner to protect and he just ran a really good lap around the top and got by us clean there. There’s not much to say other than he outran me in three and four. I just kept it low and too slow just thinking we had it wrapped up there, but obviously you never do until the end.”