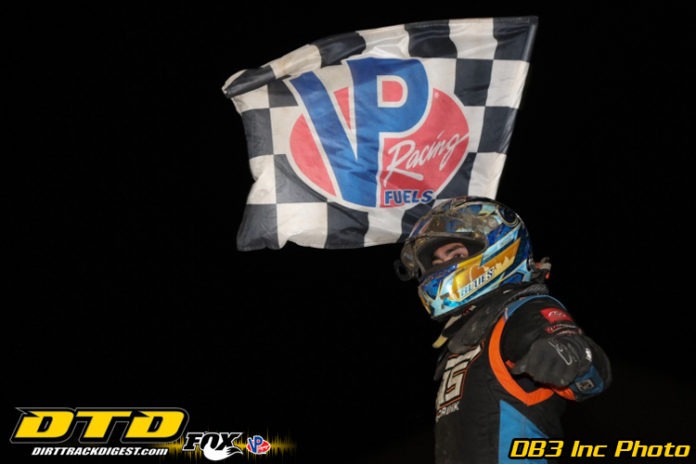 KOKOMO, IN – Chris Windom had won pretty much everything Kokomo Speedway has had to offer throughout the past decade.

He’d won two Sprint Car track championships in 2010 and 2018, numerous sprint car races on the local level at the quarter-mile dirt oval, three victories the USAC AMSOIL National Sprint Cars, and was even victorious in a USAC Regional Midget feature in 2016.

Nonetheless, that one USAC NOS Energy Drink National Midget feature win at Kokomo had eluded him. He led nine laps late in the going during Indiana Midget Week this past June, ultimately finishing 3rd.

This time around, the Canton, Ill. native sealed the deal and stamped the envelope en route to victory Saturday night, carving his way through the field after starting 14th, during night two of the Indiana Donor Network Driven2SaveLives Double Double.

In doing so, Windom maintained his point lead of the series by an eight-point margin as the 2016 USAC Silver Crown and 2017 National Sprint champ seeks to conquer the third and final prong of the coveted USAC Triple Crown, of which only six previous drivers have achieved.

Justin Grant led early from his pole starting position, outdueling outside front row starter Brady Bacon for the advantage at the drop of the green. Meanwhile, 2019 series Rookie of the Year, Andrew Layser, slotted into second past Bacon on the third lap and was on the prowl to track down Grant for the race lead.

That notion came to an abrupt halt for Layser on the fifth circuit as he pogo’d at the entry of turn one and collected a broadsliding Thomas Meseraull who was running fifth at the time. Daison Pursley (7th) was also caught up the altercation but was able to restart from the tail and race back to 11th in the end. Layser and Meseraull weren’t as fortunate, though, retiring from the race with damage that didn’t allow them to continue. Layser finished 20th and Meseraull 21st.

Series Rookie Emerson Axsom slowed to a stop while running fourth to bring out the yellow on the 15th lap, and on that ensuing restart, leader Courtney stuck to the bottom, all while being swarmed high and low behind each shoulder. Second running Bacon went topside and a suddenly surging Windom ventured even lower on the bottom, making his way toward the front after starting 14th.

Windom had gone fifth to third just prior to the yellow, then picked off another position in the pecking order on the 16th lap to roll to second with his vision affixed to Courtney just ahead. Windom had just run ninth in the preceding Sprint Car feature and was determined not to let Sprint feature winner Courtney sweep the night.

“The sprint car race didn’t go too well for me, so I had to get something done in that midget race,” Windom offered. “The track really wasn’t anywhere but around the bottom, and I had to try something. I just got lower than everybody else and made it work.”

On the 21st lap, Windom was on the brink of reaching his destination and was able to pull to the inside of Courtney entering the first turn. Courtney responded in kind by racing back by Windom on the outside of turn two, edging ahead midway down the back straightaway before closing the door to take away the bottom lane in turn three, and held the advantage over Windom at the start/finish line by a half-car-length on both laps 21 and 22.

The following lap, however, lap 23, Courtney performed a bounce routine as his right rear tagged the turn three cushion. That allowed Windom to sneak under and assume the lead to beat Courtney to the stripe by a single car length. Windom quickly put the battle to rest by extending his lead to 1.6 sec. down the stretch until a lap 28 yellow for the stopped car of Axsom necessitated a stoppage that ultimately erased Windom’s lead, and provided Courtney another shot.

Courtney stepped to the outside of turn two on the final restart with three to go, and momentarily presented a serious threat to Windom’s throne. However, that proved short-lived as Windom pasted himself to the bottom and launched away to 1.015 second interval at the checkered to win over Courtney in second and Fatheadz Fast Qualifier Tanner Thorson in third, placing the top-three in the series standings as also the top-three finishers for the night. Cannon McIntosh and Buddy Kofoid rounded out the top-five in the fourth and fifth positions, respectively.

For Windom, it took everything he had in proverbial tank to race from mid-pack to win and retain his point lead while also making it the sixth time this season that a winner has started 10th or worse with the series and went on to win. It was Windom’s fourth victory of the year and one he certainly needed at this juncture of the season in his Tucker-Boat Motorsports/NOS Energy Drink – Pristine Auction/Spike/Speedway Toyota.

“Chad Boat and all these guys at Tucker-Boat have brought me a great racecar all year,” Windom expressed. “We’ve had one of the fastest cars night-in and night-out. The points battle is tight, but we had to come up there and win that race to keep us in the lead, so that’s what we did.”

For Courtney (Indianapolis, Ind.), it was an astounding ninth consecutive top-three finish with the series in his Clauson-Marshall Racing/NOS Turbo – ZMax/Spike/Stanton SR-11x, including his third-straight runner-up finish as he pursues a second-straight series title.

“After that restart, we just weren’t as good as we were at the beginning of the race,” Courtney said. “I don’t know if something happened, but that’s how it goes sometimes. It was still a good night; we qualified second, ran third in the heat and second in the feature, another second place in the midget. We’ve been running top-three a lot here lately with not a lot of wins, but it was a great night for our team. We’ll keep putting the pressure on Chris here and see if we can get ourselves another championship.”

Thorson (Minden, Nev.), a Kokomo USAC Midget winner this past June, displayed continual improvements throughout the weekend in his new ride, the Tom Malloy/Trench Shoring – Ed Pink Racing Engines – Rodela Fabrication/King/Ed Pink Toyota. He finished fourth at Gas City, Ind. in his debut with the team on Friday night, then set fast time during Fatheadz Eyewear Qualifying on Saturday at Kokomo, followed by a third-place feature run.

“I can’t thank this team that’s behind me enough,” Thorson praised. “(Car owner) Tom Malloy and (crew chief) Jerome Rodela gave me a call to come run their stuff. I had a bunch of options and I just felt like these guys were the best ones to pick. I’m happy with (tonight). I wish we could’ve run a little better, but a single lane on the bottom makes it difficult to pass. Hats off to Chris (Windom) and Tyler (Courtney). They’re two of the best out here in the midgets and it’s pretty awesome to be able to race with them.”