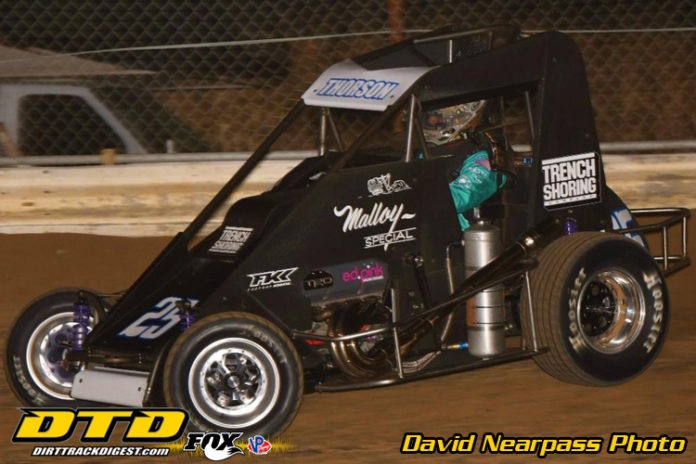 The win was Thorson’s fifth with the series in 2020, and the 18th of his career, tying him with Tyler Courtney and Dave Steele for 37th all-time. In doing so, the 2016 series champion became the seventh different Leffler Memorial winner in the seven runnings of the event.

“This is one of the races I’ve wanted to win for a long time. I’ve never really been in the right situation, but now we did it.,” Thorson, a 2nd place Leffler Memorial finisher in 2016, said. “I never knew Jason (Leffler) on a personal level, but I know a bunch of people who were really good friends with him and always talked about how good of a guy he was and that he was definitely a badass in the racecar. There’s no two ways about that. I wish he was here to throw some sliders and race with us. This is an awesome event to win.”

Car owner Tom Malloy and crew members Jerome Rodela, Chris Tramel and Brinton Marvel each experienced their first USAC win on the National level on this night. Their success together began when Thorson and Hayward Motorsports, with whom he scored four victories this year, parted ways in mid-September. Team Malloy and Thorson’s first two races together resulted is finishes of 4th at Gas City, Ind. and 3rd at Kokomo, Ind. on Sept. 25-26, respectively.


It’s been an opportunity that Thorson has relished with support from Factory Kahne, Reliable, K1 RaceGear and Arai Helmets.

“It’s all around a good fit for me,” Thorson explained. “I trust all the guys around me and we’re all buddies too, so it makes it pretty easy. When one of us messes up, we all mess up. There’s no pointing fingers. Tom Malloy has had a dream to come back here from California and compete against the national guys and win. That’s been his goal with having this team out here; it’s to go out and win races. I’m really ecstatic and really happy to say the least, but we’ve got more to win. We’ve still got to get better. We’re never good enough.”

Thorson carries the “Malloy Special” name on the side of his Tom Malloy/Trench Shoring – Ed Pink Racing Engines – Rodela Fabrication/King/Ed Pink Toyota. Tom’s father, Emmett Malloy, a 2018 National Sprint Car Hall of Fame inductee, fielded cars with the same “Malloy Special” lettering adorned on his rides nearly three-quarters of a century earlier, a winning heritage that has taken shape all these years later.

Emmett built, owned and operated California’s famed Carrell Speedway during the 1940s and 50s, where the 1949 racing film “The Big Wheel” starring Mickey Rooney was filmed, and also hosted the inaugural CRA event. A dominant run with, most notably, Troy Ruttman on the AAA Sprint Car trail in the mid-20th century as well as winning performances with Rex Mays and Andy Linden, was followed by a pole run in the champ cars with Bobby Ball at Phoenix in 1950 and a pair of Indianapolis 500 starts with Jimmy Reece, the first of which came in 1954 with a car sporting No. 25 on the tail.

Sixty-six years later, a No. 25 Malloy Special was back at the forefront once again with Thorson behind the wheel. Starting sixth at Wayne City, Thorson made a somewhat methodical drive to the head of the pack, getting to 4th on the opening lap where he settled into a groove for the first quarter of the event.

Up front, however, the battle for the lead pit pole sitter Cannon McIntosh and outside front row starter Chris Windom against one another for the lead. An exchange of sliders between the two on both ends of the 1/8-mile dirt oval on the first lap gave way to Windom as he withstood the challenge to step away from McIntosh exiting turn two on the second lap.

After a pair of restarts for separate minor incidents involving Brady Bacon, then Chase Johnson and Buddy Kofoid, McIntosh rose to the surface once again, sliding past Windom entering turn one on the 11th lap, with Windom responding by driving back under McIntosh to reclaim the lead. Rinse and repeat on lap 13, and Windom was able to thwart McIntosh’s bid once again.

When McIntosh skidded and clanged the outside guardrail in turn three on lap 16, he subsequently lost substantial ground to Windom. By then, Thorson was in 3rd following a tug of war with Kevin Thomas Jr. for the position and was now collapsing on McIntosh for the runner-up spot, which he’d gain by algae-eating the bottom of turn four to surpass him on the 25th lap.

Opposite approaches took Windom topside and Thorson to the bottom to run one-two entering the final quarter of the 40-lapper. With 12 laps remaining, Windom’s lead stood at 1.3 seconds. One lap later, Thorson had shaved off a full second of Windom’s lead, which put Thorson in prime position to drive right past Windom off the bottom of turn two on lap 30 to snare the race lead by beating Windom to the rubber first.

“I’ve always been good finding the rubber first,” Thorson revealed. “I watched the lapped cars start to pull away from Windom and was thinking that he’s going to jump down there, but he never did. I just got down there and got my rhythm going and made sure I didn’t come too far off the bottom. I got to him and my nose was there, and I thought he’s probably going to chop me in the next corner. He tried but he didn’t have enough momentum with how slick it was. Seeing how he could never get a run on them, or pass them, I knew I had to stay low and hope they’d move up so I could get by one of them. Just a chain reaction sort of deal as it all played out.”

A lap 37 caution for a turn one tangle involving Logan Seavey (7th), Jason McDougal (8th) and Tyler Thomas (12th) restacked the deck once more for a four-lap trophy dash. However, the entire pack followed Thorson’s lead by not leaving the bottom. Thorson led the field around for the final four to reign victorious by a 0.544 sec. margin over Windom, Kevin Thomas Jr., McIntosh and Daison Pursley.

“Tanner found (the rubber) first and got by us there,” Windom recalled after leading a race-high 29 laps. “I was trying to clear a couple more lapped cars because I knew the bottom was getting better. I just made a mistake and waited a couple too many laps to get down there.”

Kevin Thomas Jr.’s first race back in the Petry Motorsports/Robertson Trucking – FK Rod Ends – Keizer Wheels/Bullet/Speedway Toyota since June resulted in a 3rd place finish, the best result for the Cullman, Ala. native with the series this season.

“It’s fun to be able to run on the podium and run good; it’s been awhile,” Thomas exclaimed. Obviously, everybody knows it’s been a hellacious year. It’s good to bounce back like that. They gave me a great racecar. We were one of the first to hop to the bottom and we were making a little bit of ground on them, but not enough. I saw Tanner go by a few lapped cars on the bottom and he found (the rubber) right in front of us and ended up winning the race, so it was a good job on his part.”