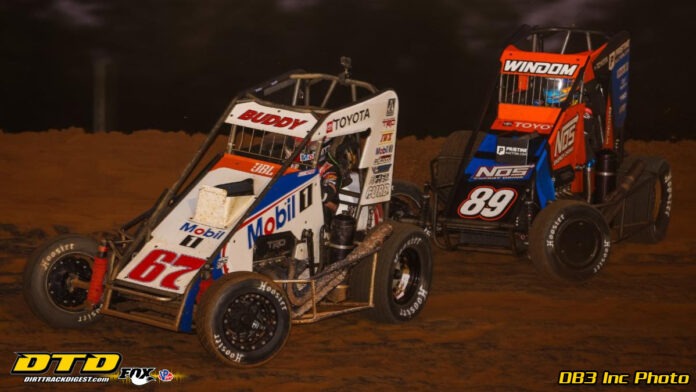 BLOOMINGTON, IN – They say you only get one shot at making a first impression.

In the ensuing moments after his first career Indiana Midget Week victory on Friday night, Buddy Kofoid let it be known that his initial impression of his first visit to Bloomington Speedway was that it was now on his personal list of favorite racetracks. And it’s easy to see why.

The Penngrove, California driver’s first Bloomington experience made an impression itself on the immediate and season-long outlook as well by becoming the first driver to earn a third USAC NOS Energy Drink National Midget win in 2021 while also extending his point lead in the series and rising to the top of the latest Indiana Midget Week standings.

Kofoid earned his stripes after prevailing in a near race-long duel with Chris Windom to earn his sixth career USAC National Midget feature win, and first at the 1/4-mile dirt oval in his Keith Kunz-Curb-Agajanian Motorsports/Mobil 1 – TRD – IWX/Bullet By Spike/Speedway Toyota.

The win earned team owner Keith Kunz his 117th win with the USAC National Midget division, 16 behind all-time leader Steve Lewis’ 133, and his all-time leading fifth at Bloomington, all of which have come during Indiana Midget Week.

Getting a win during Indiana Midget Week is a source of pride for Kofoid, not only because of the stage, but because of what it took to earn it on Friday night.

“To win an Indiana Midget Week show is probably one of the bigger midget wins of my career,” Kofoid said. “It feels pretty good to beat some of the best, straight-up, head to head. I had a blast racing with Chris; that was so much fun. If you didn’t like that, I don’t know what to tell you. That was hard racing back and forth.”

Reigning series champion Windom established superiority at the beginning from his outside front row starting position, ducking underneath pole sitter and leading Rookie Bryant Wiedeman off turn two for the lead.

Windom controlled the first four laps until lap five when first time Fatheadz Eyewear Fast Qualifier Corey Day stopped in turn three to bring out the first yellow of the night. The Clovis, Calif. driver did not return to the lineup, and instead, dropped out with a 23rd place finish.

On the restart, third-starting Kofoid maneuvered past Wiedeman for second, then began his approach toward Windom, attempting to strike quickly and often with a slider on the bottom of turn three that came up short with Windom able to dodge the barrage for the time being, cutting back under off turn four to stave off Kofoid momentarily.

The detriment of showing a hand, but coming up short in executing completely, is that the leader can gain a sense of what line might be working in the trailing driver’s pursuit, then counteract that notion with a bit of defense of their own.

That’s what happened for Windom on the 10th lap when Kofoid’s bid came up short on the bottom of turns three and four. Windom altered his entry a tad lower to where he’d wind up sliding himself in the turns and, thus, prevented Kofoid from slipping by for the time being.

“When we ran the slider line in three and four and caught Chris, he saw it, then he started doing it,” Kofoid recalled. “I was like, ‘man,’ I don’t want to say it was game over, but I though it would be pretty hard to get to him after that. I figured pretty early in the race that the top was really far around into three and I figured that if I could be stuck enough as far as throttle control and keep it kind of straight up to the cushion, we’d have a shot to catch him pretty quickly,” Kofoid continued.

Throughout the middle stages of the 30-lapper, Windom and Kofoid matched each other punch for punch for the top spot with one’s small step being retaliated by a giant leap for mankind as the pair practically swapped their brief stays at the head of the field each turn of every lap.

Kofoid made the decisive move on the 15th lap with a demonstration of “how low can you go” which he delivered with a dive down toward the infield tire marker at the entry to turn one.

Following a yellow for the stoppage of Kyle Cummins on lap 20, Windom offered a swift reminder of his presence by sliding past Kofoid in turn one on the restart to lead once more. Nonetheless, a lap later, Kofoid mimicked the favor and returned to first with a similar turn one overtake to reinstate his name at the top of the leaderboard and stretching his lead to a full second mere moments later.

With six laps remaining, 16th running Chase Randall flipped atop the turn three and four cushion. He was uninjured. During the red flag period, Kofoid had several moments to contemplate and organize his thoughts for how to protect himself on the ensuing restart as well as some internal advice for the final mile-and-a-half stretch to the checkered.

“Those last six laps, I just told myself ‘don’t get tight, don’t get tight on the curb,’” Kofoid explained. “It worked out really good. The only time we got tight was that restart, and I thought I about gave it away right there. It shows how much speed this car has, to get it right back the next lap and keep on going.”

Windom presented his challenge under Kofoid in the first turn just after the drop of the green flag, but Kofoid kept his foot in it, never wavering from the cushion in turns one and two to drive back by Windom and secure his position in the lead. Windom searched the racing surface for an alternate path to get back into contention, altering his line to high in one and two and low in three and four.

Kofoid, who took 23 races to win his first USAC National Midget feature in September of 2020, carried onto to the win for the sixth time in the past 18 feature events with a 1.493 second margin of victory over Windom, Kevin Thomas Jr., Brady Bacon and Bryant Wiedeman, who earned a best career series finish by rounding out the top-five.

“That was a lot of fun racing with him there,” Windom said of the battle with Kofoid. “We just kind of had to go where each other weren’t. When I was out front, I felt like I was a sitting duck in three and four. I didn’t feel like running the top was that great, but I saw him slide me there and I realized that was a better line. He was just a little better than us there and we couldn’t make quite as much as speed as him, but we’d get shots at him on the restarts and I felt like we had a really good run at it, but he was just a little bit better than us.”

“Through three and four, he could run that line a little bit better than I could and we were about the same speed through one and two,” Windom continued. “I just couldn’t quite figure out where to stick it just right through three and four. That’s where he got away from us. I tried the bottom there on the last restart, trying to make something happen, but it didn’t quite work either. I’m happy with the overall result from the night though.”

Kevin Thomas Jr. (Cullman, Ala.) equaled his best result of the USAC National Midget season with a third-place run in his Petry Motorsports/Gray Auto – FK Rod Ends – Greber Racing Comp./Bullet By Spike/Speedway Toyota. Thomas also set a new 12-lap track record for the series at Bloomington with a time of 2:34.699 during the Elliott’s Custom Trailers & Carts Semi-Feature, displacing the former record of 2:40.02 established by Logan Seavey in 2019.

**Chase Randall flipped on lap 24 of the feature.