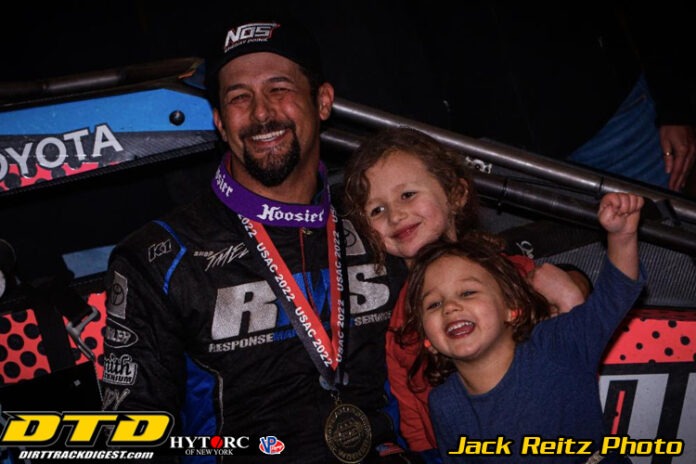 After Justin Grant scored two-in-a-row for the team to begin the year in February at Ocala, Florida’s Bubba Raceway Park, it was the San Jose, California native’s turn to carry on the unblemished trend in the non-points, special event at the 1/6-mile dirt oval, publishing a drive that was as pure as the driven snow flurries that blanketed the surroundings of the indoor facility.

Meseraull had the 20-car field covered for all 40 laps from start to finish in his RMS Racing/EnviroFab – Response Management Services – Engler Machine/Spike/Speedway Toyota, his second career USAC Midget triumph at the Southern Illinois Center and first since the 2018 Junior Knepper 55, which served as RMS Racing’s first ever USAC-sanctioned midget win.

After Grant’s February success, Meseraull felt that with the flip of the calendar over to March, it was now his time to enjoy the spoils of victory.

“Nothing against him because he’s awesome but, lately, I feel like my teammate has had all the luck, and he’s been picking off wins,” Meseraull said. “But tonight was my night. We started deep enough in our heat race and won it, which put us up front in the feature.”

Meseraull charged from fifth to first in his heat race which, with the format consisting of passing points for the heat races, positioned him as the highest point-earner and, subsequently, placed him on the pole of the feature, setting him up for a run as close to flawless as you’ll witness anywhere this year.

“I do think we had the best car,” Meseraull admitted. “When we’re on, we’re on, and I tell everybody that, about every third to fifth night, we have the absolute fastest car on the track, and tonight was our night.”

Meseraull checked out on the initial lap to a full second lead, but the merry-go-round came to a halt on the second lap as Justin Grant (8th) and Daniel Robinson (10th) made contact in turn two, sending Robinson over and collecting his RAB Racing teammate Will Armitage (13th) as well as Kendall Ruble (18th). All restarted except for Ruble.

Gone again was Meseraull on the ensuing restart by another second over outside front row starter Shane Cottle. On lap four, six cars became stacked against one another in between turns three and four, and involved Kyle Cummins (10th), Zach Daum (11th), Joe B. Miller (12th), Mitchel Moles (14th), Dominic Gorden (15th) and Rylan Gray (16th), knocking both CB Industries teammates Moles and Gorden out of competition.

Fourth starting Bacon was antsy to make things happen in a hurry after an uncharacteristic flip during the preceding micro sprint feature. Bacon simultaneously jousted Cottle for the second position in front of him while also fending off Cannon McIntosh’s challenge for third. Bacon looked topside and bottom before blowing by Cottle for the position on lap nine just as the yellow flew for a Cummins and Daum turn one tangle that reset the field back to the last completed lap, and repositioned Bacon back behind Cottle and forced him into a do-over.

Bacon finally found his way into second amid a wild lap 11 scramble, diving under Cottle for the runner-up spot in turn three. McIntosh wasted no more time as he surged past Cottle for third a lap later on the 12th circuit. Meanwhile, ninth-starting Jace Park had edged his way into fifth in the squabble among the top-five runners.

Both Bacon and McIntosh knocked wheels for the second position multiple times as the two traded the second spot back-and-forth with Bacon solidifying his position shortly thereafter as the contest crossed over the halfway mark.

That was all well and good for Meseraull who continued unheeded as the leader, 2.354 seconds ahead of the pack. But, as had been the case on throughout, the yellow flag arrived just as Meseraull began to pry his way through the back of the field, providing him an unimpeded path for the distance, not that Meseraull needed any of it on this night as strong as he was performing, but any little bit helps on these tight confines.

This caution period arrived when Park snagged the wall between turns one and two, sending him flipping, where he was hit by the trailing cars of Travis Berryhill (12th) and Kyle Cummins (13th), who both stopped.

Meseraull was a carnivore on the restarts all night and, each time, he quickly constructed a sturdy advantage that was impenetrable, whipping up a full-straightaway lead, maintained it and saw it all the way through as he passed under Tom Hansing’s welcoming checkered flag.

Bacon (Broken Arrow, Okla.) is the most experienced Shamrock Classic driver of all-time, starting all six feature events since the inaugural edition in 2016. However, Friday came to be his best result of the bunch after starting fourth and finishing second in his TKH Motorsports/Fatheadz – FK Indy – Champion Oil – A & B Café/Triple X/Stanton SR-11x. But his tooth-and-nail battle with McIntosh to attain the runner-up spot took everything he had in the proverbial tank to keep the fellow Oklahoman behind him in the final pecking order.

“He threw a bomb, and I really didn’t think he had room, so I just did it back, gently and professionally,” Bacon explained. “But you kind of have to do that here. There was really only one way to go, right around the top. But we’ve had a really good car really every time we’ve had the 21H out. We changed some stuff in the pits, hoping to change our luck a little bit, and it obviously worked because we had some bad mojo from the micro. Hopefully we’ve got things turned around for the big money tomorrow.”

“I felt like we had a better car than where we finished,” McIntosh lamented. “When we kept getting a run for second, I felt like (Bacon) did everything he could to keep shutting us down, but that’s racing. I’m happy to finish on the podium and I feel like we’ve got good momentum heading into tomorrow. We’ve got a good car and a great group of guys around me. Hopefully we can get a couple spots better tomorrow.”