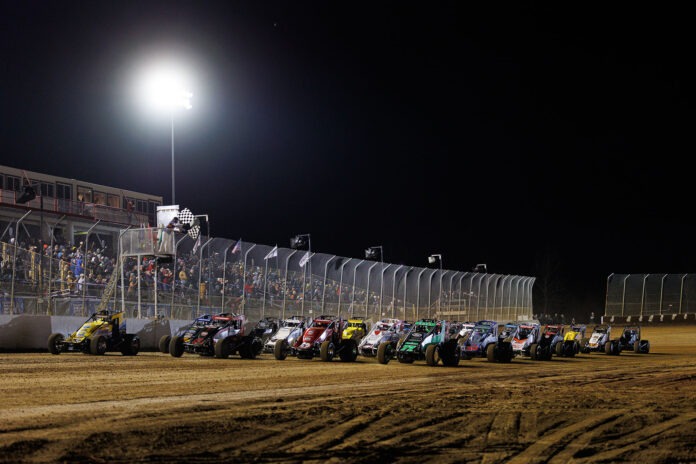 ELDON, MO – After two months off, the Xtreme Outlaw Sprint Car Series presented by Low-E Insulation returns to action this weekend with a doubleheader at Eldon, MO’s Lake Ozark Speedway.

Held in conjunction with the POWRi Lucas Oil WAR Sprint League, the “410 Nationals” on Friday and Saturday, June 10-11 will offer the standard $5,000-to-win and $6,000-to-win Xtreme Outlaw purses for teams with all Feature cars receiving $600-to-start. Remember, the top-10 in Xtreme Outlaw points will also receive tow money and courtesy pit passes from the Series.

This weekend’s doubleheader at Lake Ozark marks the first of five races in June, the busiest month thus far for the young Xtreme Outlaw Series. The Sprint Cars will return to Missouri on Friday & Saturday, June 24-25 for the St. Louis Firecracker Faceoff alongside the World of Outlaws CASE Construction Equipment Late Models and DIRTcar Summer Nationals at Pevely’s Federated Auto Parts Raceway at I-55. The Xtreme Outlaw Midgets presented by Toyota will also venture to Jacksonville, IL on Sunday, June 26 for the Series’ third event and first since debuting at Millbridge (NC) in May.

LEARY’S LEADING: Through the first three races in Series history, CJ Leary has established himself as the early favorite for the inaugural championship worth $20,000. He dominated the Xtreme Outlaw Sprint Car Series debut at Volusia (FL) in February and backed that up with another exciting score in April during his first appearance at Lake Ozark (MO). This weekend, the Bill Michael Motorsports #77M returns to the Eldon, MO 1/3-mile with sights set on a third and potentially fourth triumph.

In the grand scheme of things, Leary (Greenfield, IN) is one of the hottest Non-Wing Sprint Car drivers in the entire country, let alone in the Xtreme Outlaw Series. The 26-year-old leads the nation with six victories including the No Way Out 40 at Paragon (IN), BOSS at Montpelier (IN), USAC at Terre Haute (IN), and BC’s Indiana Double at Kokomo (IN), and his two out-of-state Xtreme Outlaw triumphs.

THE MAD MAN: If the trends and numbers have anything to say about it, Robert Ballou is due for a win. In the first three Xtreme Outlaw Sprint Car events, Ballou finished fourth, then third, and then second. He’ll try to get that overdue victory this Friday night when he returns to Lake Ozark Speedway, where he charged from 17th-to-2nd in April and led throughout the closing stages.

The Rocklin, CA native is already a two-time victory in 2022 with both wins coming under the USAC National Sprint Car Series banner at I-70 (MO) and Terre Haute (IN). He’ll certainly be one to watch this weekend as he hopes to join Leary and Thomas Meseraull as a winner with the Xtreme Outlaw Sprint Car Series presented by Low-E Insulation and cut down into Leary’s +36 point lead.

HANGING AROUND: Behind Leary (676) and Ballou (640) is a trio of patient, but stealthy gassers keeping their name in the early-season title fight with the Xtreme Outlaw Sprint Car Series and looking to make up some ground this weekend.

Shane Cockrum (-77) of Benton, IL earned his first podium finish in the Series’ most recent trip to Lake Ozark aboard the Amati Racing #66. Carson Short (-114) of Marion, IL led the first-ever lap in Xtreme Outlaw history and backed that up with two top-10 results before a flip at LOS ended his bid to make it three-for-three. Jake Swanson (-130) of Anaheim, CA has been s steady frontrunner in the #21AZ and much like Short’s Lake Ozark flip, would be much closer to the top of the standings if not for his DNF at Volusia while running third.

LONG HAUL: Sitting seventh in the current Xtreme Outlaw standings, Alex Bright of Collegeville, PA is showing the utmost commitment to the new series with his long haul this weekend. He and the Hummer Motorsports #20 will cover more than 1,000 miles one way on their 15-hour trip from Collegeville, PA to Eldon, MO.

Had it not been for a crash while running inside the top-five at Lake Ozark in April, Bright would likely be sitting third in the points right behind Leary and Ballou after his back-to-back strong runs at Volusia. The 31-year-old ace enters this weekend with three wins already under his belt in 2022, those all coming with the USAC East Coast Series at Bloomsburg (PA), Delaware (DE), and Williams Grove (PA).

A whole contingent of Missouri natives will be in attendance this weekend hoping to defend home turf at Lake Ozark as they’ve done countless times before with the POWRi WAR Sprint League. Among the previous local non-wing winners in Eldon are the likes of Kory Schudy (Springfield, MO), Wesley Smith (Nixa, MO), Jack Wagner (Lone Jack, MO), and Riley Kreisel (Warsaw, MO).