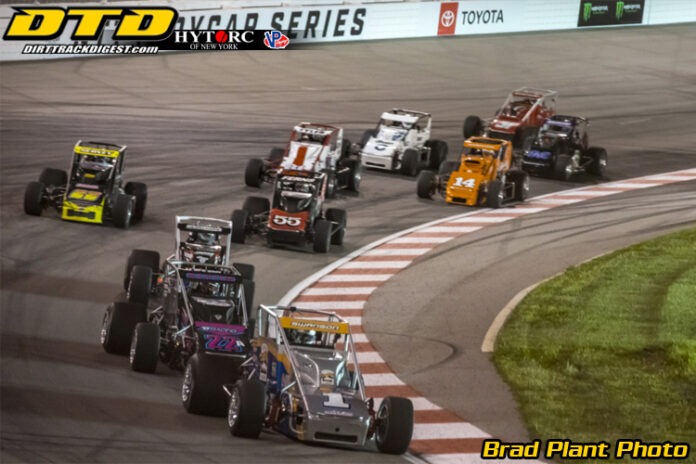 MADISON, IL – Entering Friday night, a rare blank had yet to be filled on Kody Swanson’s USAC Silver Crown resume that seemed almost as remarkable for its absence as does his record number of series wins and championships. Almost.

In three past series starts at World Wide Technology Raceway in Madison, Ill., the Kingsburg, Calif. native had never won at the 1.25-mile paved oval. Not only that, he’d also never even led a single lap at the joint.

His fourth start, however, found a much more satisfying result for the six-time series titlist and, in the process, he broke a long-standing USAC Silver Crown record at the OutFront 100 in his Doran-Dyson Racing/Glenn Farms – Henry U.S.A. – Duncan Oil/Beast/Lanci Ford.

Swanson’s newest milestone came by virtue of him winning a USAC Silver Crown main event at a 14th different racetrack, surpassing the 13 distinct venues that 2002-03 series champ J.J. Yeley had won at in his USAC Triple Crown career.

The 37th USAC Silver Crown win for Swanson was his third consecutive after going winless throughout the first four races of the 2022 season as he increased his point lead to a season-high 63 markers when trouble befell his two closest title contenders in Logan Seavey and C.J. Leary.

After capturing his 40th career pole position earlier in the afternoon, Swanson led the opening lap under green, and the following seven, which were all under yellow following a turn one tangle between series Rookies Gregg Cory (17th) and Tom Paterson (18th), which sent Cory careening into the outside turn one wall. Paterson’s car limped away from the scene, putting a premature end to both drivers’ races just two laps in.

On the ensuing lap nine restart, 2013-14 WWT Raceway winner Bobby Santos dove under Swanson to take command of the lead in turn three. Santos’ hold up front was short lived as Justin Grant powered under Santos at the exit of turn two to take the reins all for himself on lap 10.

Davey Hamilton Jr. was the man of the moment shortly thereafter as the seventh-starting driver charged from 10th to first in a span of seven laps, shooting to the bottom by Grant for the lead on lap 18 all while sliding his left side wheels over the rumble strips getting into turn one.

Meanwhile, Swanson went full-Tom Petty, free fallin’ through the field back to the sixth position by lap 12 and remained mired on the outside of the top-five looking in with a quarter of the 100-mile, 80-lap distance complete.

On the 21st lap, second-running C.J. Leary entered turn three and suddenly veered right into the outside wall, an incident triggered by a flat right front tire. Leary glanced off the SAFER barrier but continued rolling to pit lane where his crew went to work. After a few ins and outs through pit lane, which forced him to go multiple laps down, Leary soldiered on to the finish line nine laps behind the leader in the 10th position in the final running order.

At that point in time, Swanson needed some redirection as he prepared to restart in the fifth position coming to the lap 25 restart.

“On that restart, I was fifth and might have been a little pouty and maybe I played some things wrong,” Swanson recalled. “I got in trouble and got a little further back than I wanted, but there were a bunch of drivers doing such a good job by drafting each other better than I was, so I got shuffled back. It took a good restart to get myself going.”

That certainly got the ball rolling for Swanson as he marched to fourth, to third and then to second with an outside pass of Grant in turn two on lap 29, then tracked down Hamilton, slipping under on the front straightaway, then clearing him with gusto at the entry to turn one on lap 33.

“I got by Justin and Davey, and I knew they were running awful hard, and it looked like they could do it all night, so I figured I was going to need to press hard and try to get the lead as soon as I could,” Swanson explained. “Luckily, I got a big draft on Davey to make the pass and we had great speed out front.”

For the final 25 laps, Hamilton pushed Swanson to the brink. After 10th running Travis Welpott came to a rest against the outside wall in turn one on lap 49, Hamilton used the lap 57 restart to motor his way into the lead briefly on the bottom of turn one. However, Swanson went undaunted and powered back around Hamilton at the exit of turn two to preserve his lead.

Santos, who had stopped during the preceding yellow flag with a tire issue, brought out the next yellow on the 59th lap when he stopped on the pit road exit in turn one, setting up another restart in which Hamilton used to edge into the lead by a full car length underneath Swanson in turn one on lap 61. Once again, Swanson hammered down to drive back by Hamilton around the outside to retain the lead off the second turn.

As Swanson stretched his lead to two seconds, the yellow flag was displayed for third-running Taylor Ferns who came to a halt on the front straightaway on lap 74, setting up one final chase with three laps to go as the field bunched up for the lap 78 resumption.

“Some of those restarts were awfully tough,” Swanson admitted. “(Davey) would get such a great draft, and he was really timing it right.”

Hamilton gave it one more timely attempt, and momentarily nosed ahead of Swanson in turns one and two, but couldn’t quite carry enough momentum off the bottom to dispose of Swanson. Instead, Swanson firmly and calmly drove back around on the high side and meticulously distanced himself from any challengers.

Swanson completed his task with success, 1.158 seconds in front at the finish line ahead of Davey Hamilton Jr., Mario Clouser, Justin Grant and Nathan Byrd. For Hamilton, Grant and Byrd, the finishes were the best results of their USAC Silver Crown careers.

Earlier in the day, Swanson became the first to reach 40 career USAC Silver Crown pole positions. As it turned out, his fastest lap was downright historic. Swanson set a new world speed record for a traditional USAC Silver Crown car during the Fatheadz Eyewear Qualifying session with a time of 30.675 seconds, which translates to 146.699 mph, eclipsing the former speed record for a traditional Silver Crown car set by himself at Iowa Speedway with a 146.212 mph in 2012.

The term “traditional” is used in this matter due to the utilization of a “New Generation” “Super Speedway” car that was used in competition solely during the years of 2006-07. Aaron Pierce turned a qualifying lap of 175.012 mph during the brief era in USAC history at Florida’s Homestead-Miami Speedway in 2006.

Swanson’s time trial run was monumental in a multitude of manners. It broke Chris Windom’s nine-year-old series track record at WWT of 31.082 seconds and 144.778 mph, set back in 2013.