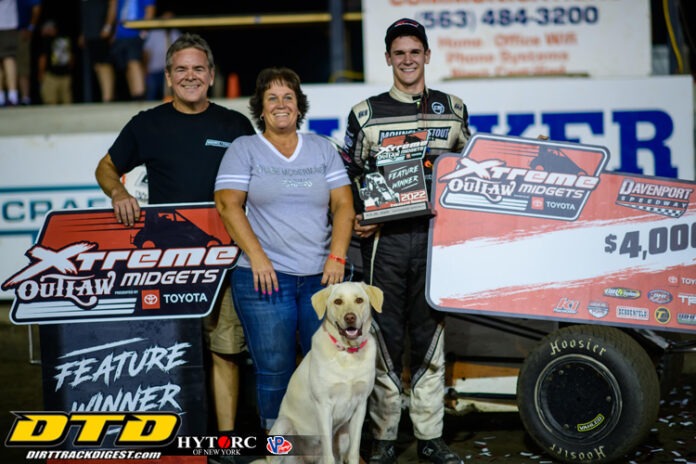 DAVENPORT, IA – The wildly impressive streak of parity was extended on Friday night as the Xtreme Outlaw Midget Series presented by Toyota welcomed a sixth winner to Victory Lane in the sixth race in Series history.

Becoming the fifth and final leader of an action-packed debut at Iowa’s Davenport Speedway, Chase McDermand, of Springfield, IL, methodically picked his way forward amid one of the most heated battles for the lead in all of Midget racing.

Fans witnessed a whopping seven official lead changes in the opening 11 green flag laps as Jade Avedisian, Jesse Love, Bryant Wiedeman, and Jacob Denney exchanged control of the top spot. It was a back and forth, neck and neck, see-saw battle with more comers and goers than you could imagine in such a short span of time.

With eyes glued to the front, the 22-year-old McDermand was able to quietly guide his Mounce/Stout Motorsports #40 to third-from-seventh in only a handful of laps as he entered the picture with nearly seven other winning contenders on the racey 1/4-mile.
Once the intensity calmed down around halfway, McDermand settled into second behind his teammate, Jacob Denney, and it appeared as if a Mounce/Stout 1-2 finish was in order. However, when Denney’s #61 lost brakes in the closing stages, he also lost his marks and could do little to react as McDermand feathered the throttle and drove by the 16-year-old gasser to lead Lap 27 of 30.
A green-white-checkered finish was then survived as McDermand crossed the checkered flag to join Gavan Boschele, Taylor Reimer, Jade Avedisian, Chance Crum, and Michael Pickens as the sixth different winner in the brief history of the Xtreme Outlaw Midget Series presented by Toyota. It’s also his third triumph of the year with the POWRi National Midget League.

“I watched that B-Main and I knew that I was committed to the bottom with how we set this thing up,” McDermand said. “From the drop of the green flag we were passing cars and when I got to second, I was feeling pretty good. I knew we would have a shot, but I really wish I could’ve raced Jacob for that straight up had his brakes not gone out.”

After leading laps 11-26, 16-year-old Jacob Denney, of Galloway, OH, slipped back to finish third as he lost brakes while leading in the late running. It not only ruined the potential for a Mounce/Stout 1-2, but also Denney’s long-overdue trip to Xtreme Outlaw Victory Lane following a third at Jacksonville and second at I-55.

It did, however, signal the already-known arrival of Mounce/Stout Motorsports onto the national scene. In a world where powerhouse organizations like Keith Kunz/Curb-Agajanian Motorsports and CB Industries handle headlines, this family-owned team has gone toe-to-toe with the best in Midget racing, and they’ve succeeded.
“This is big,” noted owner Jay Mounce. “We’ve been chasing these guys for years. We’ve come a long way from where we started with our equipment, and the Stanton SR-11 engines are a large part of that, and so is our drivers’ incredible feedback. You’re racing Keith [Kunz], Chad [Boat], Cannon [McIntosh], and so many knowledgable badasses, it’s so tough. Being able to race with these guys week-in and week-out is a rewarding feeling.”

Sandwiched in between the Mounce/Stout podium with a career-best runner-up effort was Dominic Gorden. The 16-year-old native of Clovis, CA moved forward from sixth to second in his Keith Kunz/Curb-Agajanian Motorsports #71K. He led the charge for a KKM team that occupied five of the top-seven spots on Friday night.

Daison Pursley, who returned from a nine-month traumatic injury recovery, enjoyed a stellar showing as he battled up front and ultimately finished fourth in the Keith Kunz Motorsports, Toyota Racing, Bullet Chassis #71. Rounding out the top five was his KKM teammate Gavin Miller with another career-best effort in fifth place.

Closing out the top-10 at Davenport were Taylor Reimer, Bryant Wiedeman, Chance Crum, Zach Daum, and Kyle Jones with a 21st-to-10th outing for the TJ Forged Hard Charger Award.