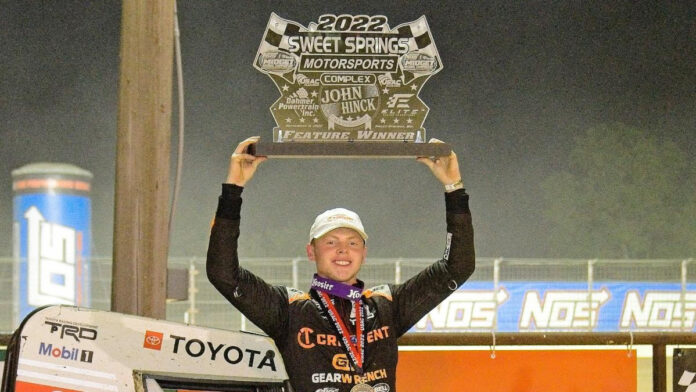 No such moves were necessary for the Bixby, Oklahoma racer on Friday night as he got the bulk of his work completed early in lightning quick, non-stop, green-to-checkered fashion on night one of the John Hinck Championship Presented By Dahmer Powertrain.

In fact, McIntosh’s time of six minutes and 45.81 seconds for the distance around the 1/6-mile dirt oval made it the third fastest 30-lap feature in the 67-year history of USAC National Midget racing.

Meanwhile, throughout the first four USAC National Midget features at Sweet Springs since 2018, victory lane had witnessed a succession of Keith Kunz/Curb-Agajanian Motorsports drivers come through, making the team an undefeated four-of-four at the track entering Friday’s round.

It seemed fitting that the one to snap KKM’s string of Sweet Springs victories was one of the drivers who was part of the winning streak – McIntosh. Nowadays, driving for his family team, it was he who put the kibosh on KKM’s Sweet Springs stranglehold by overtaking one of the team’s drivers and personally ending the run while starting one of his own by becoming the first multi-time USAC winner at the joint.

In fact, McIntosh has now led laps in each of the past three USAC events at Sweet Springs, and his recent midget dominance at the track shows no bounds with a pair of POWRi victories to his credit in both 2021 and 2022.

Starting third, McIntosh slightly fell back into the distance as the top-two of Crouch and Daum established their presence at the head of the class all while McIntosh was treading water, trying to stay afloat.

“It was just a fight getting going early on,” McIntosh recalled. “The top two kind of checked out a little bit and I was struggling out of (turn) four. I kept getting above it with the right rear and just spinning the tires on exit.”

“But once I got in a rhythm,” Mcintosh continued. “I was able to run them down and get by Daum. Once I got by Daum, I was in a pretty good rhythm by then. We got by Crouch pretty well and I don’t know how close they were behind me, but I just felt like I had a really good car. I felt like I was able to manage the top really well and just kind of train track along the cushion.”

Crouch started from the pole and crawled the bottom with success to grab the opening lap lead while Daum followed suit by slipping underneath outside front row starter Taylor Reimer to take the second spot on lap three off the bottom of turn four.

Soon thereafter, it became a three-car breakaway at the front with one-third of the race complete as Crouch led his rivals on the low line. That, in turn, left the high line wide open for McIntosh to hustle around the outside of Daum in turn four on lap 10 and began rapidly ripping his way toward Crouch.

Cracking the whip, McIntosh charged around the outside of Crouch and into the lead at the exit of turn four on lap 12 yet wasn’t completely in a “coast is clear” situation just quite yet with lapped traffic running high, low and middle on the bullring surface, prompting his decision to leave the top for the bottom in order to work his way into the clear with 10 laps remaining.

However, that immediately resulted in McIntosh’s lead dwindling from 1.7 seconds to seven tenths over Crouch with five laps to go as McIntosh threaded the needle between the lead lap tail-end cars of Chase McDermand and Jace Park.

“I just knew I needed to get by them and try to put as many lapped cars as I could between myself and Brenham,” McIntosh explained. “What I was doing down in three and four for most of the race kind of started to go away in the end, so it was getting kind of tricky, but I was able to maintain.”

The moment required rapid-quick thinking and necessitated another evasive gap shooting maneuver by McIntosh in turn three between the last bit of lappers, Chance Crum and Dominic Gorden, with a couple laps remaining which, in turn, pinned Crouch behind the two and resulted in him losing all the ground that he had made up in the preceding laps.

McIntosh reached for the proverbial can opener and pried open the interval once more as he finished off his third win of the season and the sixth of his career by a 1.224 second margin at the stripe over Brenham Crouch, Zach Daum and hard charger Bryant Wiedeman (from 11th) while Justin Grant raced his way into the top-five at the finish in a backup car following a sky-high flipping episode during his heat race.

Crouch’s performance was his best yet in USAC National Midget competition. After leading much of the early going, the Lubbock, Texas native took home a runner-up result in his Keith Kunz-Curb-Agajanian Motorsports/Hi-Plains Building Division/Bullet By Spike/Speedway Toyota.

Four new USAC track records were set on this “re-write” night at Sweet Springs with Ethan Mitchell showing the way in Fatheadz Eyewear Qualifying, Buddy Kofoid in his heat race, Jace Park in the semi and Cannon McIntosh in the feature event.