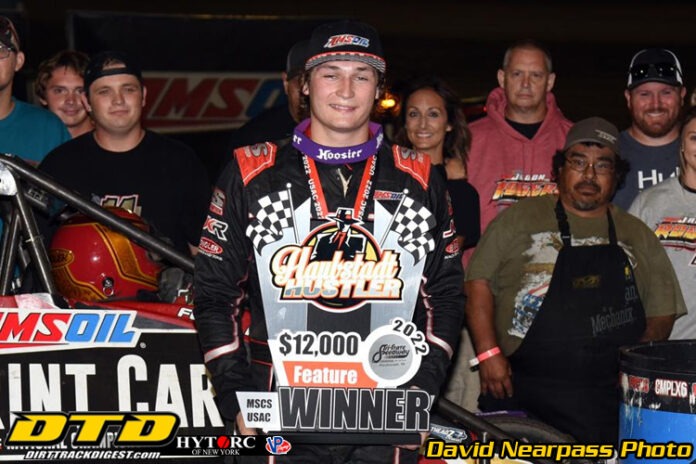 HAUBSTADT, IN – For more than 67 seasons, countless individuals have clutched onto the dream of winning a first career USAC AMSOIL Sprint Car National Championship feature race.

Some are able to realize that dream but, for most, it remains but a fleeting notion that is never fully seized.

Now imagine that, in the quest of that first victory, you are put in the position to slay multiple giants to achieve the dream.

Only, this wasn’t a dream anymore for Jadon Rogers, it was reality.

But, in the process of his $12,000 score, the 20-year-old Rogers had to withstand a barrage from the two winningest USAC Sprint Car drivers of all-time at the southwestern Indiana quarter-mile dirt oval – Kevin Thomas Jr. and Kyle Cummins.

Close calls have been a way of life over the past three seasons of USAC competition for Rogers with three runner-up finishes, two of which have come at Tri-State. One in particular came in the spring of 2021 when Cummins denied him his first win by passing him with four laps remaining.

Now, on this night, Rogers could breathe a sigh of relief. He is a USAC winner. Finally.

“We’ve been too close so many times,” an exasperated Rogers recounted. “It took forever, but now it feels so rewarding. I’ve been racing for a long time, since I was five, and my dream has been to race to where I could make a living off it. Engler Machine and Tool gave me that chance. My dad (Kyle Rogers) is always at Engler’s late and it’s just never-ending with this crew. There’s not many of us.”

The event was co-sanctioned by the Midwest Sprint Car Series and, as a bit of a twist from the norm, their format was utilized on this evening. Rogers earned his way into the redraw by capturing a victory in his heat race. There, he drew a “1” pill, signifying his starting position on the pole for the night’s feature.

Meanwhile, Thomas lined up fourth for the feature while Cummins started from slot seven. Between the two drivers, they had won each of the past three USAC National Sprint Car features and possessed wins in nearly half of the Haubstadt Hustler that had ever been run. Score: Thomas four, Cummins two.

Rogers spurted out to the early lead with outside front row starter C.J. Leary and Thomas in tow. However, Thomas didn’t have to wait much longer as he slipped under Leary to take over second off turn four just five laps into the run.

By lap 14, Thomas had reached Rogers’ rear bumper and gave chase as Rogers swiped in-between and swung over, under, sideways, down through the competition, yet still wasn’t able to keep Thomas from pulling even in turn two.

Following a double Carson caution on lap 20 when both Carson Garrett (13th) and Carson Short (16th) stopped on opposite ends of the racetrack, Jason McDougal jumped into the fray at the front as he went to the top and drove by Thomas at the exit of turn four.

McDougal’s time in the adjacent catbird seat came and went in a near calamity in turn three on lap 27 as he nearly sideswiped the dramatically slowing lapped car of first-time USAC starter Adyn Schmidt. Although McDougal avoided contact, his slip off the bottom opened a lane for Thomas to maneuver past in order to retake second.

Thomas showed a nose under Rogers in turn one on the lap 28 restart. Rogers denied him and swiftly powered away until turn three when he nearly tripped up and became misshapen in turn three, turning himself full lock sideways, yet still managed to keep Thomas at bay. But for only a moment longer.

The next sequence is one that won’t soon be forgotten. On lap 36, Thomas slung his ride into turn one under Rogers for the race lead. Now three-wide coming out of turn two, Rogers found himself the meat in an unhealthy sandwich with the lapped car of Stan Beadles just to his right, forcing Rogers to lift, which allowed Thomas to skate on by for the lead.

“I felt like I couldn’t catch a break,” Rogers lamented. “I got out front and I felt like I was really good, but then I saw KTJ and, as we got into lapped traffic, he really put the pressure on me and got by me.”

But it was the best of times and the worst of times for Thomas as, moments later, Rogers pulled alongside him at the exit of turn four. No contact was made as Thomas swung wide and nailed the outside concrete wall with his right rear but continued across the line in the lead with a flattened tire, forcing him to a halt in turn two. His only lap led was his last lap of the race as he exited and did not return, dropping out with an 18th place result.

It was time to cue the band as Cummins restarted third but ducked under McDougal for the second spot in turn two on the lap 36 restart. However, a succession of stoppages due to a Brady Short stall on lap 38 and a three-car tangle between Carson Garrett, Kendall Ruble and Matt Westfall in turn one put the onus on Rogers to deliver restart-after-restart flawlessly.

The latter restart came after Rogers stumbled in turn four coming to the green, which hooked he and Cummins together momentarily, then slid the door open for Cummins to capitalize. But less than a half-lap later, another restart came about and, on the final one, Rogers aced the exam.

“I just knew I had to stay calm,” Rogers explained. “I was nervous before the race started, pacing back and forth in the infield. I got a good restart and then some cars in the back bottled up and we had to do it all over again. But my last restart was pretty good.”

That it did as, for the first time all night, Rogers became relieved by the absence of the nipping at his heels from the constant chase of the Hound of the Baskervilles. Rogers took it from there and cemented victory by a 0.978 second margin over Cummins, McDougal, fast qualifier Chase Stockon and Brady Bacon.

It doesn’t matter. It may seem inconsequential. But Rogers is unsure of how it may have played out in a scenario where he didn’t have the good fortune of pulling the “1” in the redraw. However, he put himself in the envious position by winning his heat race and the rewards he reaped because of it became anything but inconsequential.

“I don’t know if we would’ve beaten them had we started behind them,” Rogers acknowledged. “They’re good everywhere they go but we got our heat race win, we got the draw and sometimes it’s better to be lucky than it is to be the best one out there.”

“We were super tight, and the longer the race went, the more the fuel kind of came off, but the track kept making it tighter and tighter,” Cummins commentated. “On the next to last restart, I was fully committed to run it down in there, but he was still there, and I couldn’t slide him. I knew that was our chance to win. I think it probably makes up for a couple years ago. I think we passed him with a few laps to go, but he got it done this time.”

Issues plagued Chase Stockon’s KO Motorsports ride early on in the night with the car being pushed around the track several times without any sign of power. Just in the nick of time, the crew got the wiring repaired and got Stockon back on track where he simultaneously earned Dirt Draft Hot Laps fast time as well as Fatheadz Eyewear Fast Qualifying honors. It was Stockon’s 30th career fast time with the USAC National Sprint Cars, moving him into 12th all-time alongside Pancho Carter and Justin Grant. Stockon subsequently finished a solid fourth in the feature.