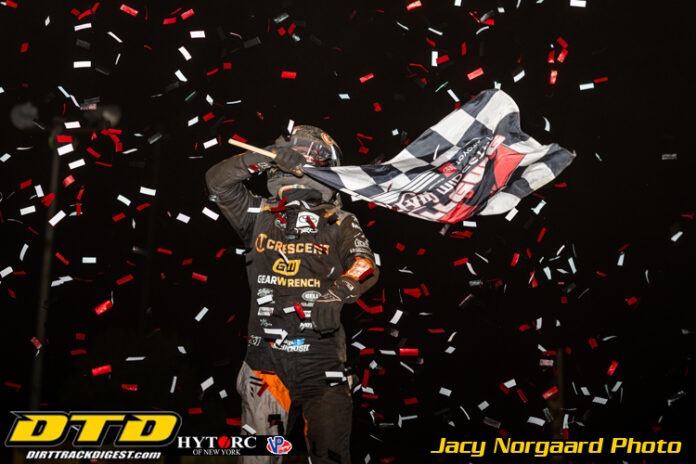 OKLAHOMA CITY, OK  – He’s been one of the most dominant forces in Dirt Midget racing this season, and he’s just broken through with the Xtreme Outlaw Midget Series presented by Toyota.

Cannon McIntosh led the last 22 laps of Friday’s portion of the 18th annual Charlene Meents Memorial at I-44 Riverside Speedway to collect his 15th national Midget win of the year. The victory also extended the different winners streak to nine in the first nine Xtreme Outlaw races.

Despite his success at the national level this year, McIntosh said it’s been tough sledding for he and the Dave Mac-Dalby Motorsports team as of late. They experienced engine issues in Thursday’s Feature event at Port City Raceway, taking them out of the running while contending for a win at the head of the field, but rebounded nicely with a backup car and a trip to Victory Lane Friday night.

“I feel like going into every Xtreme race, I had a shot to win and had a car to win; we just haven’t been able to put the cap on it,” McIntosh said. “To be able to rebound tonight and finally get the monkey off of my back was a good feeling.”

Taking the green from inside Row 2, McIntosh put himself in good position early. Inside of the first 10 laps, he was already chomping at the bit for the lead, hounding the tail tank of polesitter Jonathan Beason. Using the top side around the 1/5-mile track, McIntosh wound-up the momentum and surged past Beason to take the lead on Lap 9.

“I felt like we were carrying momentum up there,” McIntosh said. “The top seemed to have a little bit more speed early.

“Beason having to lift and getting tight there in the center – it was a little tricky getting by him with him running a wide lane down the strightaway. But once I was able to get by him, I was good.”

From there on out, it was all McIntosh out front. The 19-year-old from Bixby, OK, led each of the remaining 22 laps to score the $4,000 grand prize and complete a 180-degree turnaround from their 24th-place DNF on Thursday night.

“When we’re down, I think it’s been how well we’re able to turn it around and how fast we’re able to do that,” McIntosh said. “We turn things around pretty quick when things aren’t as good. Recently, we’ve struggled a little bit and kinda got out of rhythm. But tonight, we got back on the horse, pulled the backup car down and did what we needed to do.”

While McIntosh had things covered out front, the battle for position raged on behind him. Daison Pursley was going on a mission through the top-10, picking off one car every few laps until he was at the front of the field with only 10 laps to go.

“I felt like the top came in pretty good later in the race; the bottom slicked-off and I was kinda just the first one up there trying it,” Pursley said. “That definitely played to my advantage.”

Wading through several caution flags and restarts, Pursley held strong in battling with the top-five and was able to make the move for second on Beason after the final restart with three-to-go.

“I just had to be really patient with Beason,” Pursley said. “I probably waited a little bit too long; later in the race like that, you kinda gotta go. I feel like I kinda waited too long for Beason.”

Similar in style to Pursley’s runner-up finish, Chance Crum came to the front in similar fashion. From 15th on the starting grid, Crum drove the Rudeen Racing entry to the front in a hurry, advancing 10 spots inside of the first 20 laps.

“That middle lane started coming in toward the end,” Crum said. “In the second half of the race, I was able to keep my momentum up through there.

“A little bit of attrition helped, and I just kinda survived until the end.”

With three laps left, Crum was riding fifth, battling for position in a hornet’s nest with Beason, Pursley and Gavin Miller. He got around Miller for fourth on Lap 29 and nipped Beason at the finish line for the last podium spot – the second of his Xtreme Outlaw career.

“It definitely got hairy’ they were racing really hard,” Crum said. “A couple of them bounced-off each other, I think, so I was just trying to be patient, wait for a lane to open up, and it did.

“We were able to sneak by one, and then get Beason there at the line by like a foot. It was really close.”

Further back in the field was the scene for the two leading drivers in Xtreme Outlaw points – Zach Daum and Bryant Wiedeman. Daum was up front for the first half of the race, riding fifth when he suddenly lost power on his Bundy Built Motorsports #9m coming to the green on a Lap 18 restart.

He went to the work area, made repairs under yellow and was able to race back to a 12th-place finish. Meanwhile, Wiedeman was quietly advancing positions, but was only able to make up five points on Daum in the points standings with a ninth-place finish.

The inaugural season finale for the Xtreme Outlaw Midgets hits I-44 Riverside Speedway Saturday night, Oct. 15, in the conclusion of the 18th annual Meents Memorial, where a champion will be crowned. Tickets will be on sale at the track on Saturday, and if you can’t be there in person, stream all the action live on DIRTVision.