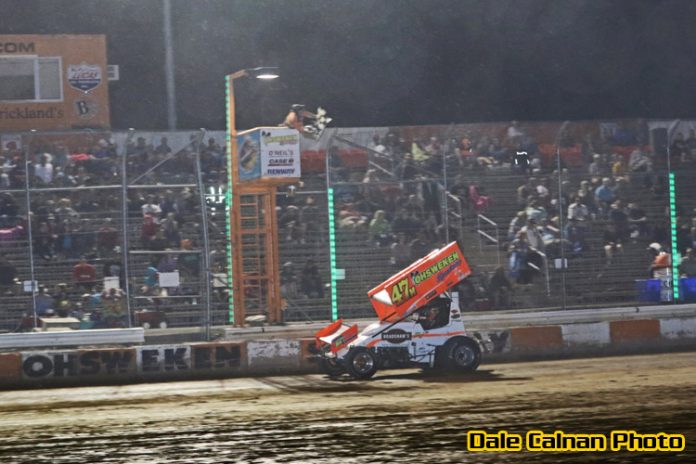 ROCHESTER, NY – The final Speedway Showcase Episode of the inaugural season is set to air, but it will go out with a bang with a 90-minute show that is sure to satisfy any style of dirt race fan.

Beginning this Sunday, September 10th, at 10:30 AM, the Triple Crown Showdown from the Ohsweken Speedway will start broadcasting on Spectrum Sports Channel (formerly Time Warner Cable Sports Channel) across Upstate New York. Additional airtimes will vary depending on the market and are listed below.

This was the second running of this special event, and just like in 2015, television cameras were on hand to capture all the action.  The weekly 360 Sprints served as the appetizer while the Go Nuclear! Late Models finally kicked off their 2017 Schedule with a thrilling 20-lap event.  Last, but certainly not least, the Big Block Modified Super DIRTcar Series battled it out for 75 laps at “The Big O”. Every lap of feature action is shown plus highlights of each heats as well as full coverage of the late model heats.  Sufficient to say, there is no shortage of racing on this 90-minute broadcast.

As part of the promotion for the Triple Crown Showdown, a $5,000 bonus was put out there for any driver that could win two of three features; three drivers attempted the double, but you will have to tune in to see if anyone was successful as host Rich Vleck is joined by expert Doug Elkins in the booth while veteran pit reporter Paul Szmal gives expert insight from the pits.


Speedway Showcase will air regularly at 10:30 A.M. each Sunday Morning, with more airtimes available throughout the week.   After the final airtime, the broadcast will be available on-demand at www.SpeedwayShowcase.com, just as the first five episodes are now.

This will be the final episode of Speedway Showcase to air on Spectrum Sports Channel as the station will cease operations at the end of this month.  Speedway Showcase is set to return in 2018 though with a new network partner with details to be announced over the winter months.

Speedway Showcase is produced by Weedsport Productions and edited by Hot Wings Media, which has broadcasted more than 50 race nights over the last 10 years. For more information, visit www.SpeedwayShowcase.com.