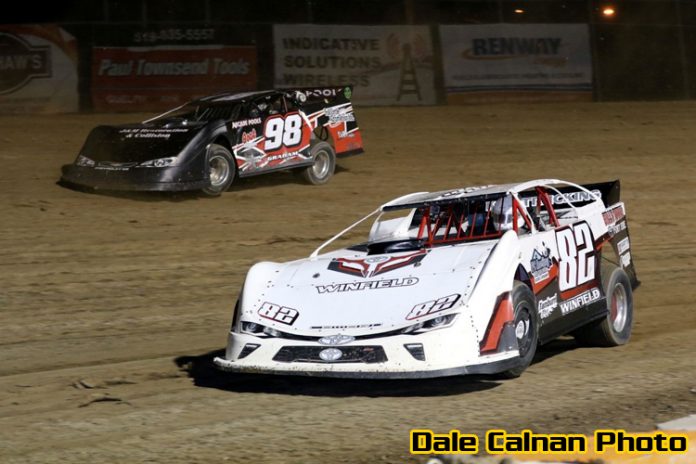 Tickets and camping for the Northern Summer Nationals will go on sale February 1st, 2019 online at https://ohswekenspeedway.ticketforce.com/, while previous Major Event Ticket Holders can log-in to their accounts immediately and purchase tickets.

“We’re excited to be bringing three big Sprint Car stars for another huge show at Ohsweken this July, but we also know our regional and weekly racers love the opportunity to race in the spotlight as well,” said Clinton Geoffrey, Ohsweken Speedway general manager. “We made sure we gave all of our weekly racers the chance to do just that while bringing in some of the top regional racers to create a memorable event for our awesome Ohsweken fans.”

On Monday, July 22, Ohsweken will also welcome the top Dirt Late Model drivers from Ontario, New York, Michigan and Pennsylvania. The annual event is often a showdown between Open- and Crate-powered Late Models. Last season, Rob Pietz proved the Crate motor could pull off the upset when he scored the win over Gregg Haskell on August 3.

Joining the Late Model Open will be the Canadian/UMP Modified challenge. Drivers from the weekly Canadian Modified division at Brighton Speedway and UMP Modified division at South Buxton Raceway will converge on Ohsweken for bragging rights. Last season, Fenton, Mo. native Ken Schrader scored a victory over Leamington’s Joel Dick in the only visit of the year for the UMP Modifieds on June 1. Also on the Monday night card will be Ohsweken’s ultra-competitive HRW Automotive Mini Stocks.

Tuesday’s show will have the 360 Sprint Cars back in action along with the Race of Champions Sportsman Tour. The RoC have raced at Ohsweken each of the past three seasons with Chad Chevalier picking up a pair of wins before Brent Begolo became the most recent winner last August. The visit also offers a return to Ohsweken’s roots as the Sportsman division was the track’s headline class from 1996 until 2007.

Also on the car for Tuesday’s showdown will be the Action Sprint Tour. The series is entering its second season of action and the race will mark the first of two stops at Ohsweken in 2019. The 602 Crate powered Sprint Cars run the same rule package as the weekly Strickland’s GMC Crate Sprint Car division, which often leads to high car counts and thrilling action. In 2018 it was Aaron Turkey, Jacob Dykstra and Josh Hansen who scored victories with the AST at Ohsweken. Punctuating the Tuesday night show are Ohsweken’s weekly Middleport Mechanical Thunder Stocks.

The 2019 Northern Summer Nationals will feature NASCAR Champions Tony Stewart and Christopher Bell and Sprint Car Superstar Rico Abreu in a pair of $5,000 USD-to-win and $400 USD-to-start 360 Sprint Car races on back-to-back nights. For Stewart, it will mark his first race at Ohsweken since 2013 while Bell and Abreu will be making their Ohsweken debuts. The winner each night will earn a guaranteed starting spot at the 15th annual Canadian Sprint Car Nationals.

The complete 2019 Ohsweken Speedway Friday Night Excitement schedule will be released next Tuesday, February 5, including details on the track’s 24th season opener and the 15th annual Canadian Sprint Car Nationals schedule for September 12-14, 2019. For more information on Ohsweken Speedway and the Northern Summer Nationals, visit www.ohswekenspeedway.com.
——————–
Ohsweken Speedway Live Stream
Can’t make it to the track or don’t live within driving distance? No problem! Check out all of Ohsweken’s weekly Friday Night Excitement action live online for free via the Ohsweken Speedway Live Stream. The stream goes live at 7:30pm EST each race night at www.OhswekenSpeedway.ca and on our official Facebook page.