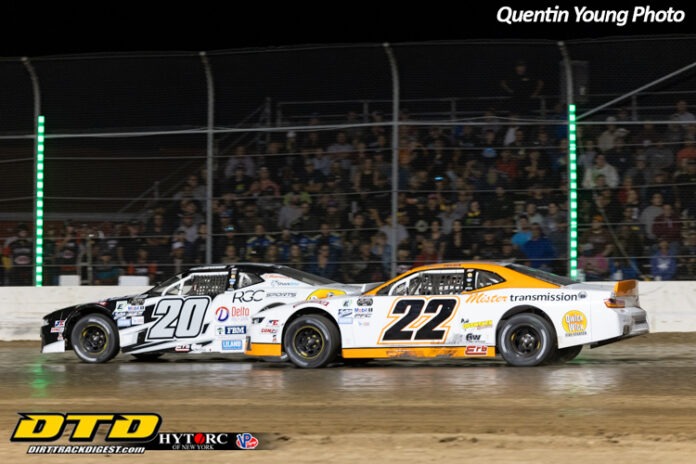 OHSWEKEN, ON – The first NASCAR Pinty’s Series race on dirt at Ohsweken Speedway was worth the wait.

Lapcevich, who earned his first NASCAR Pinty’s Series triumph in the season opener at Ontario’s Sunset Speedway in May, took the lead following a restart with 52 laps left from polesitter Marc-Antoine Camirand.

The official results will show Lapcevich led the rest of the race, but what the results won’t show is how he nearly lost the race to Friesen during the final restart with two laps left following a spin by Raphael Lessard.

Lapcevich and Friesen restarted on the front row and Friesen did his best to steal the win away from Lapcevich. The two made contact in Turn 2 moments after the restart, which allowed Friesen to stay under Lapcevich through Turns 3 and 4 and as they crossed under the white flag.

Through Turns 1 and 2 Friesen got a great run and was able to pull clear of Lapcevich to take the lead as they raced down the backstretch.

Lapcevich responded quickly by hitting the rear bumper of Friesen’s No. 22 before turning left to cross back under Friesen. The two bounced off each other multiple times coming to the checkered flag, with Lapcevich getting to the finish line first by a car length.

“Just an awesome night,” said Lapcevich, who earned a series record $25,000 for his victory. “Just a big thanks to my whole 22 Racing crew.

The FBM/Qwick Wick/RGC Sports No. 20 was fast both days. I’m happy we could get it done. With all those restarts I was getting nervous.

It’s not easy having Stewart Friesen on your heels.

The second-place finish for Friesen was his second runner-up result in as many days at Ohsweken. He also finished second in a Sprint Car event at the three-eighths-mile dirt track on Monday.

“He did everything he needed to do and probably a little bit more,” said Friesen, who was racing as a teammate to Lapcevich. “It is what it is. I knew if I could just control his exit a little bit off of two and off of four we could inch ahead. And we were (ahead) and he crossed me up and it was what it was. Wild finish.”

Jake Sheridan, who was a late substitute for NASCAR Cup Series star Christopher Bell, finished third ahead of Camirand and Alex Tagliani.