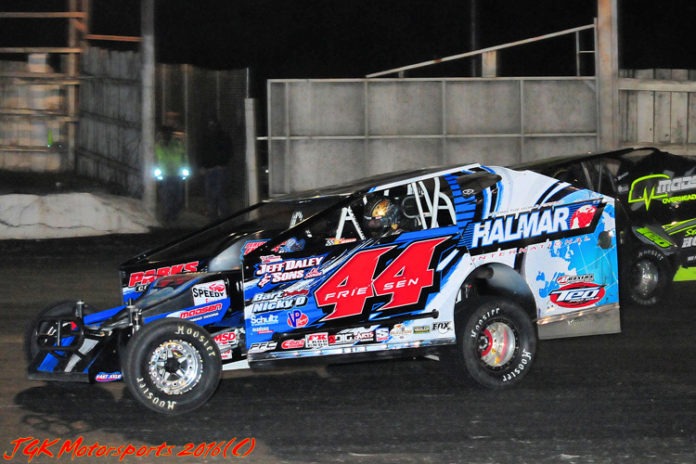 MIDDLETOWN, NY – Stewart Friesen brought a packed house to its feet on the final lap of the 2016 racing season as he secured his first Eastern States 200 Modified victory during a heated battle with the event’s all-time winner Brett Hearn Sunday night at the Orange County Fair Speedway.

Friesen, who called OCFS his home for the first time this racing campaign, dove underneath Hearn while racing between the third and fourth turns on the 200th circuit around the five-eighths mile, hard clay oval. Their cars made brief contact while battling for the lead with Friesen coming out on top and Hearn drifting wide towards the outside wall.

Anthony Perrego also was able to slip past Hearn to score an impressive second-place showing in his first race behind the wheel of Bill Pascual’s No. 3 car. Hearn regrouped to place third with Rick Laubach and Kenny Tremont rounding out the top five.

“Brett tried to block the track and I just filled in the gap underneath him,’’ said Friesen about his race-winning move. “I was able to dive down real low and Brett moved too far up. But I knew this was going to be the only chance I had to get past him. We did make some contact, but sometimes you just have to go for it. Things worked out for us this time.’’

Friesen, who also captured this year’s Bud Lite 200 during Super DIRTcar week in Oswego, was easily the class of the 44-car field in the early going from his starting pole position. The Sprakers driver was able to lap cars at will as racing was under green conditions until Jimmy Horton came up with a right rear flat with 26 laps completed.

Several other competitors were forced to the pits throughout the race as the abrasive track conditions took its toll during most of the race.

Perrego, in fact, was forced to the pits with a right rear flat after 28 laps were completed. He would rejoin the field just before the mandatory pit stops could begin after 30 laps were scored. Drivers had to take one mandatory stop at any point of the race from the 31st lap on.

Friesen continued to control matters on the race track as he was able to hold a decisive cushion on the field while many of his competitors – including Hearn – made early their mandatory stops early in the race.

Friesen finally made his mandatory pit stop with 88 laps completed and second-place running Tim Hindley followed him. That turned first place over to Mike Kolka, who remained there to collect the $950 bonus for leading at the halfway point. Kolka would drop out three laps later with mechanical issues to hand Perrego the lead.

Perrego, who still needed to make his mandatory stop, was on top at the 104th lap with Hearn now riding in second place. Perrego would finally make his trip to the pits on the 112th circuit as Hearn assumed the lead for the first time.

Hearn, who was seeking his 12th Eastern States crown, and Tommy Meier were now running first and second as they were in position to produce a repeat of last year’s 200-lapper, which was won by Meier.

Friesen, meanwhile, was racing his way through the field following his stop and stood 10th by the 124th lap. He continued to work his way through the pack and broke into the top five behind Hearn, Laubach, Meier and Mike Ruggiero by the 147th circuit.

Friesen passed Meier to take over third place by the 166th lap and now only had Hearn and Laubach ahead of him. He stood there until a spectacular first-turn accident by Chris Shultz brought out the red light with 180 laps completed. Shultz’ car made hard contact with an inside jersey barrier on gthe homestretch and then landed on its side against the pit lane guard rail. Shultz wasn’t injured.

Friesen jumped ahead of Laubach on the ensuing restart to grab second place before several caution periods during the final 20 laps slowed racing. Friesen, in fact, caused one when he came up with a flat right rear and was forced to pit on the 183rd lap.

But Friesen capitalized on all the cautions down the stretch to move through the field and stood fifth with Bob McGannoin brought out the final caution on the 185th lap.

Friesen worked his way past L.J. Lombardo for fifth place a lap later, and moved into third behind Hearn and Perrego with 10 laps to go. He caught Perrego for second place on the 194th lap to set up his race-winning move on Hearn.

“Brett had a real good race car, but I think having fresher tires at the end really helped us,’’ said Friesen. “We’ve tried all season long to find the right combination at this race track and this race team deserves all the credit for all of their hard work.

“I want to thank Chris Larsen for this opportunity. We’ve struggled to get things right here, but I think we stuck right to our strategy and this was just one heck of a win. It’s something I’ve wanted to achieve for a long time now.’’