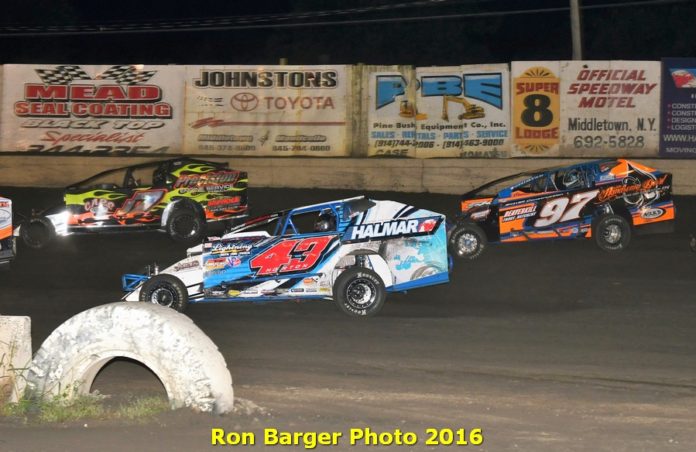 MIDDLETOWN, NY – On Saturday, April 22, the 68th consecutive season of weekly racing at Orange County will find the first green flag waving at 6:30 pm. Headlining the program will be the 800-horsepower Big-Block Modifieds in a 30-lap feature race. They’ll be joined by the Small-Block Modifieds, the always exciting Sportsman, and the unpredictable Street Stocks. Qualifying races will set the fields for the evening’s feature events.

It will all play out in just four weeks when weekly stock car racing resumes at one of America’s oldest active speedways. Will there be new Opening Night winners added to the long list of great Orange County drivers? Or will previous victors take the checkered flags once again? Racing gets under way at 6:30 PM at the historic Middletown, New York five-eights-mile “Hard Clay” surfaced speedway. Opening Night will include four divisions of race cars—Big-Block Modifieds, Small-Block Modifieds, Sportsman, and Street Stocks—in qualifying races and main events with the evening’s program sponsored by Halmar International. The Street Stocks will be competing in the first Crane Golf Challenge Series point race.

Adult admission to Orange County Fair Speedway weekly races remains at $15, Seniors $13, and children 12 and under $1.00.

An open practice session for all OCFS racing divisions has been set for Friday, April 7, 2017. The pits will open at 2:00 pm; practice from 4:00 to 8:00 pm.
Advance and season ticket sales and additional information is available at the Track Office. Call 845-342-2573 during business hours. Fans and competitors are reminded to visit the speedway website for the latest track news: www.orangecountyfairspeedway.net.