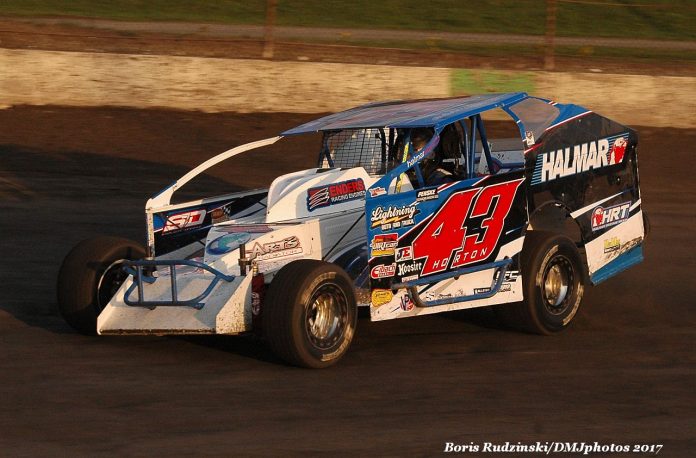 MIDDLETOWN, NY – Jimmy Horton has collected a lot of hardware during a sensational racing career that has spanned over five decades.

But Horton, despite enjoying great success throughout the years during an on-and-off stint at the Orange County Fair Speedway on Saturday evenings, has never managed to garner a season-opening victory at the historic race track.

Horton, who returned to OCFS as a regular campaigner in 2016 after a long hiatus, put that problem to rest last Saturday night as he dominated a 26-car field in the Modified 30-lap main event. The veteran driver also kick started his quest for another track title – a goal he set for himself coming into the season.

“I’ve been running on 20-year intervals at this track,’’ explained Horton. “I won my first Modified championship here in 1976 after finishing second to Wayne Reutimann the year before in my Modified rookie season. I came back in 1996 and took my second championship in the Dutchess Overhead Door No. 87 car.

“I was hoping to win another last year, but just fell a little short. We’re out to get that third championship this year and this was a good way to start the season. (Halmar International owner) Chris Larsen has given me a great opportunity in this car and we’re here to win this thing.’’

Horton, who captured the second heat race, started outside pole alongside Mike Kolka to start the feature and never looked back. The veteran driver led the entire 30-lap distance en route to his 16th career Modified victory at OCFS.

“We’ve been fast all season, but have run into a few bumps along the way,’’ said Horton. “I was leading a race in Florida, but was forced out with an oil leak. We took a Super Short Track Series race in Delaware for our first win of the season.

“This is a real good car that we have and I’m looking forward to a good year. The track was in pretty good condition and I really had no problems throughout the race. I just had to steer the car and stayed out of trouble.’’

Jeff Heotzler Sr., who started third, also powered ahead of Kolka on the initial green and ran second behind Horton for most of the race. Kolka made a late-race pass to finish second with Heotzler, reigning track titlist Tommy Meier, Jerry Higbie, Bob McGannon, Mike Ruggiero, Danny Cronk, Steve Dodd and Anthony Perrego rounding out the top 10.

Radivoy, who earned his first career sprint car win Friday night in the NEWS wingless sprint main event at Accord Speedway, led from start-to-finish as he picked up his first career OCFS triumph.

“This has certainly been a weekend I’m going to remember,’’ said Radivoy, who has raced only two full seasons in CRSA. “The only other racing I’ve ever done is with go-karts, but we traveled all over the country racing on asphalt. This win sure feels great.’’

Radivoy, who finished third in the first qualifying heat, jumped to first place from the start, and had Emily VanInwegen chasing him throughout the event. She was followed across the finish line by Eddie Strada, Christian Rumsey and Tyler Jashembowski.

Former Modified driver Mel Schrufer, who returned to OCFS late last season, picked up the first victory of his Sportsman racing career as he captured the 20-lap feature with second-generation driver Jared LaBagh breathing down his neck.

“I never saw him, but I certainly could hear him,’’ said Schrufer of LaBagh, who tried desperately to pull off a winning move in the latter stages of the race. “I really heard him between the first and second turns.’’

But Schrufer, who led the whole way from his pole starting spot, held his ground as he picked up his first win at OCFS since earning his only Small Block Modified triumph here on Aug. 1, 2009. LaBagh settled for second with Greg Sleight, Joey Bruning and Frank Venezia rounding out the top five.

“The key for me was starting on the pole,’’ said Schrufer, who won the first heat race. “Because track position is so important at this race track.’’

Bobby Flood, who led from the opening green, looked en route to an impressive win before getting involved with some slower traffic while racing through the third turn on the 10th lap. Flood made contact with a lapped car, shot to the outside wall and then flipped near the pitgate. Flood wasn’t injured.

Emerson Cargain Sr. moved a step closer to OCFS’s all-time Street Stock winner Al D’Antonio as he led wire-to-wire to capture the 15-lap main event. It was the 42nd career triumph for Cargain, who needs six more to deadlock D’Antonio.