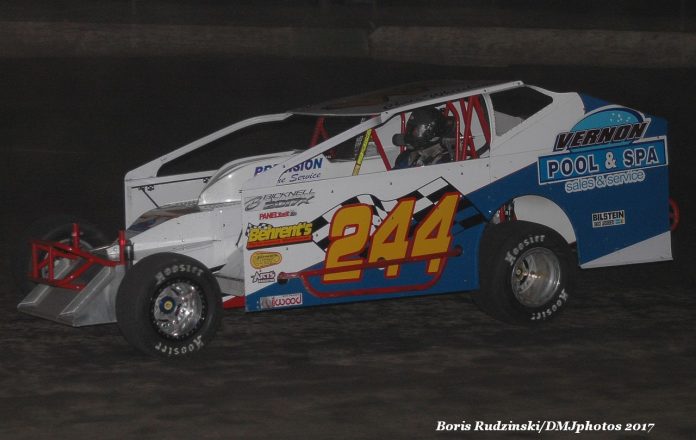 Eurich seemed headed for his 50th career Modified victory at the historic track as he enjoyed a commanding lead as the 30-lap main event was entering its latter stages.

However, Chris Whitehead started closing in with less than 10 laps remaining as sparks were now flying from the right rear of Eurich’s car. Whitehead was able to overtake Eurich while racing off the second turn on the 24th lap and then went on to score his sixth career OCFS Modified triumph.

Whitehead, who hasn’t reached victory lane here since Aug. 31, 2013, snapped a long drought of his own, while Eurich’s quest for No. 50 will have to wait at least two more weeks. OCFS has no program scheduled during the upcoming Memorial Day Weekend.


Eurich, who last won here on May 17, 2014, is still looking to become only the fourth driver in OCFS history to accomplish the feat. Brett Hearn paces all Modified campaigners with 174 career wins, and is followed by Frankie Schneider (58) and Jeff Heotzler Sr. (50). Heotzler reached the mark last season.

Eurich, despite driving a laboring car, still managed to hold on to finish in second place with Matt Janiak, Anthony Perrego and Jimmy Horton rounding out the top five.

Whitehead, who started eighth in the 26-car field, avoided a pair of pile-ups during the early stages of the race to position himself to make a run at Eurich. He inherited second place after just five laps when Tim Hindley was forced to pit with a flat tire and Billy VanInwegen slowed in the second turn.

But Eurich dominated the event as he stretched out a big lead with the laps ticking down and no cautions the rest of the way. But after taking the 10-laps-to-go sign from OCFS starter Jerry Enright, it was evident that something was wrong with Eurich.

Whitehead was quickly slicing into his big advantage and was able to race around Eurich without much problem in the second turn with just six laps remaining.

“I really didn’t notice anything wrong with Eurich’s car,’’ said Whitehead. “I was just concentrating on the race and thought the car really felt good for the most part. I was able to close in on him pretty quickly and just waited for an opening to get past him.

“We still have some work ahead of us to get this car really going good. We have a new Precision motor in this and it a new Bicknell chassis. It tightened up a bit during the race, but I was pretty happy with its performance. We’ll just go back to work to make it better.’’

Chris Stevens made the best of his first Small Block Modified appearance as he led from start-to-finish to notch his first career victory in the 25-lap main event.

Stevens, who started on the pole by virtue of his win in the first qualifying event, was never seriously challenged in the race as he took the checkered flag more than two and a half seconds ahead of Tyler Boniface.

Mitchell was forced to settle for a third-place effort with Perrego, C.G. Morey and Allison Ricci following.

Joey Bruning is suddenly emerging as the driver to watch in Sportsman competition this season as he drove away with another dominant victory in the 20-lap main event.

Bruning, who captured the Hard Clay Open event back in April, started on the pole and never looked back as he cruised to his third career victory at OCFS. Richard Smith followed in second place with Leo Fotopoulos, Jeff Hulseapple and Greg Sleight rounding out the top five.

Mike Vigiletti moved into fourth place by himself on the all-time OCFS street stock leader board as he captured his 23rd career victory in convincing style over Joel Murns Jr., Tommy Pickles, Charlie Donald and Emerson Cargain Sr.