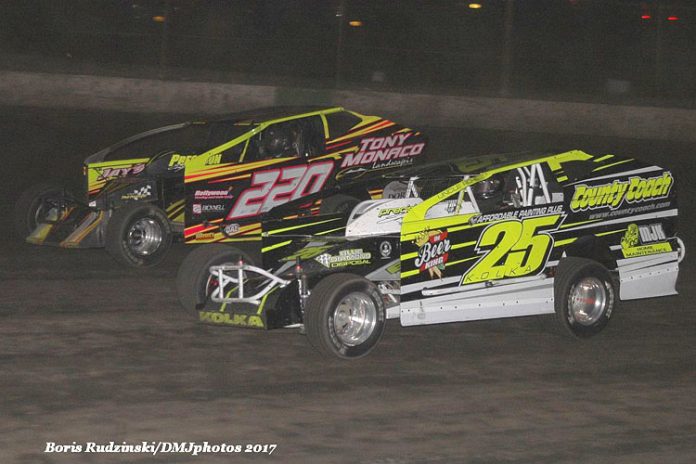 MIDDLETOWN, NY – For John Ferrier and his Tony Monaco Landscaping sponsored Bicknell chassis, all but the kitchen sink strainer was changed on his car over the last few weeks. In a cagey veteran move, the 51-year old speed merchant took advantage of multiple early restarts and nearly ran away and hid from runner up Tim Hindley in the Dana Distributors sponsored 30-lap event.

Tom Hindley and CG Morey led the field to the green with Hindley quickly setting the pace. As the field hit turn two for the first time under speed, Gary Edwards Jr. manhandled his way to second while setting a blistering attack for the lead.

The first yellow came out for CG Morey on lap three while running inside the top five. With the CG Morey Crash Palace sponsored Bickenell hobbled by mechanical failure and being towed away, the field regrouped for another crack at a green flag run to 30-laps.

On the ensuing restart, Edwards Jr. out muscled the lead away from Hindley but an immediate caution was flown for an incident involving Tommy Meier and Richie Eurich in turn two. With no laps completed on that restart, Hindley was placed back to the lead.

Once again the field grouped two by two were given the green flag from starter Jimmy Weed and the race was on again for the lead. Just seven more laps were clicked off when another caution came on lap 11.  This time for a multi-car pile up in turn four.

With the top two runners going at it like a heavyweight fight, Ferrier plotted his strategy and pounced at the right moment to shock not only second place Edwards but leader Hindley on the ensuing restart to take command of the lead on the lap 11 restart.

Once in front, Ferrier blasted the field with his Precision powered big-block. At one point nearly stretching his lead to a full straightaway. But the feature is 30-laps in distance and not just 11 or so laps.

Meanwhile, a show was being put on outside the top five by Jerry Higbie. Higbie, who started 12th on the night, was passing cars at will. He was pressing Tim Hindley for seventh as the first caution flag flew on lap three. With 14 down of 30, Higbie was up to fifth by lap 14 but would make no further progress forward by the end of the 30 lap affair.

As Ferrier was trying to check out on the field, “The Monticello Madman” Tim Hindley was doing everything possible aboard his Landscape Innovators sponored Teo with JPM power under the hood to reel in Ferrier.

In the end though Ferrier would go on to score the feature event while Tim Hindley settled for 2nd place rounding out the top 5 were Gary Edwards Jr, Tom Hindley and Jerry Higbie.

“We changed everything on this car,” Ferrier said.  “The car was really messed up.”

When asked if he knew if anyone was behind him, Ferrier went on to reply, “ I kind of knew someone was coming. I went to the high side and there wasn’t anything up there so I went back to the middle where everyone was racing.”

The win marked only the third time in his career that Ferrier graced Victory Lane. His last win came just 5 races ago on August 20, 2016. The margin of victory was 0.909 seconds over Tim Hindley.

Gary Edwards Jr, Tom & Tim Hindley all scored their first top fives’s of the season at Orange County. While it is June, the track has had only three big-block features for the regular season…

18 year old big-block rookie Tyler Jashembowski is getting weekly lessons in the big time league of big-block modified racing. The soon to be high school graduate has just two races under his belt aboard the family owned big-block. Tyler is a regular campaigner with the CRSA sprint cars as well. When asked if there is anything that he could translate into the sprint car to the big-block, Jashembowski paused and said, “they each have four tires that’s about it”. Jashembowski is headed to University of Buffalo this fall to study Mechanical Engineering. He hopes to keep the car in one piece, keep getting his dues paid and hopes to make the Eastern States 200 in the fall if all the pieces fall into place with his schooling…

Tommy Meier dropped out of his heat race with what turned out to be a fluke mechanical failure. A pulley on the water pump broke causing the engine to overheat slightly. While the team thrashed to get the Waldwick, N.J., natives car back together for the consi, Jeff Behrent who helps out on Tommys big-block ride, was able to borrow a pulley from “Hollywood” Craig Mitchell’s back up car so Tommy could make the show. Speaking of making the show, Meier was told that in the event he didn’t make it out for the consi there would be no guaranteed starters. Meier is in the top five in points and is the defending track champion in both big and small-block Modifieds. Meier made the show finishing fifth in his consi but had lots of trouble in the feature relegating him to a disappointing 15th place finish…

Trials and tribulations continue for the young speed merchant Patrick Reiser. While competing with a 358 against the big-blocks, during hot laps Reiser said he smelled something burning under the hood. After checking things over it was found that there was a small power steering leak. Reiser placed a small rag over the cap and secure it with a zip tie. While competing in his heat race the zip tie broke allowing the rag to lay on top of the headers causing the rag to catch on fire. While it was a very minor incident that caused no damage, it just goes to show you that being a rookie has its ups and downs…

After winning the feature two weeks ago, Chris Whitehead spoke of his racing experiences and what hes done over the off-season to get over the next hurdle. He recently switched over from a 23 degree engine to an 18 degree engine. A former campaigner at Lebanon Valley and now back closer to home at Orange County, the owner of Vernon Pools & Spas is hopeful that with a new Bicknell beneath him and a fresh Precision engine that things will start to become a little more consistent and allow him to run up front more often.

While Whitehead enjoyed his time at the Valley, the ever escalating power plant wars made him an noncompetitive campaigner against the likes of Bachetti, Hearn and Tremont.

“Howie was really good to us. When we left he called me and said hey what if I helped get you in every week and we said that’s nice of you but we just cant keep up with the rest of the field. If we could find someone who would foot the bill to build us a top of the line big-block and could afford to maintain it we would certainly entertain the idea of going back to Lebanon Valley,” said Whitehead…

With a mangled up car and a drive to maintain a top 10 finish, Chris Schultz accomplished that goal on Saturday night. While the entire right side of his car was mangled up from an earlier jingle in the feature, the Pawling, N.Y., driver was able to hold on to a top 10 finish in the Modified feature. To top off his night, his son won his first career Sportsman feature at Orange County…

Next week is Nostalgia Night. Upwards of 70 greats of yesteryear will be on hand to sign autographs and talk about the racing of old.