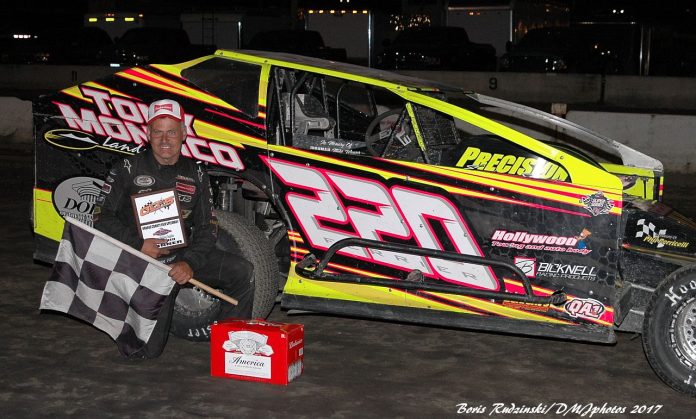 MIDDLETOWN, NY – A timely maneuver and getting back to basics propelled John Ferrier to a convincing victory last Saturday night in the Modified 30-lap feature at the Orange County Fair Speedway on Dana Distributors Night.

Ferrier, who has experimented with different set ups early this season, sat in third place behind leader Tom Hindley and Gary Edwards Jr. for several restarts early in the race. He noticed that Hindley’s car drifted high when racing resumed and said he was waiting for an opportunity to surge ahead.

That moment came following a 12th-lap restart as Ferrier dove down low entering the first turn, and surged ahead of both Hindley and Edwards. It was full speed ahead from that moment on as Ferrier opened a commanding lead and then went on to grab his fourth career win at the track.

“The door opened on the bottom and I was able to drive under Hindley and Edwards,’’ said Ferrier. “I knew Hindley’s car was too tight because he kept pushing up after each restart. I was just waiting for the right opportunity, but I knew I had to be quick.

“We opened the books during the week and just went back to our basic set up. We’ve tried different things during the season, but have been struggling. We just couldn’t seem to find the right combination. So we just went back to square one and the car was just awesome. It was really dialed in and I couldn’t be happier.’’

Hindley inherited the pole for the feature because Billy VanInwegen had to scratch his car. VanInwegen drove to an impressive win in the first qualifying heat, but his car burst into flames after the race and he couldn’t continue for the remainder of the evening.

Hindley took advantage of the pole to lead in the early going. But he nearly lost first place on two occasions to Edwards following restarts. However, the rash of early caution periods kept Hindley oin front of the 26-car field until Ferrier pulled off his race winning move.

Tim Hindley, meanwhile, took advantage of the cautions to break into the top five by the fifth lap and stood second behind Ferrier by the 12th circuit. Tim Hindley was able to cut into Ferrier’s cushion as the race progressed, but never challenged for the lead.

Second-generation driver Matt Shultz made his father Chris proud as he picked up the first Sportsman victory of his young racing career in the 20-lap main event.

Matt Shultz blasted ahead of Billy Eggers Jr. following a fourth-lap restart and never looked back as he finished ahead of Roger Henion Jr., Joe Conklin, Eggers and Joe Bonetti.

“This is a very special win for me,’’ said the 15-year-old Shultz. “I’ve won here in the Rookie class, but that can’t come close to this win. This car has been fast all season and I had a second place finish with it two weeks ago at Accord Speedway.’’

Dylan Smith picked up his first career victory in the Rookie Sportsman 15-lap feature as he finished ahead of Bobby Flood, Roddy Watts, Jake Bedell and Chris Raser.

Smith, who led the entire event, had his winning drive red-flagged after four laps were completed when Jeff Higham flipped his car in the first turn. Higham wasn’t injured in the crash.