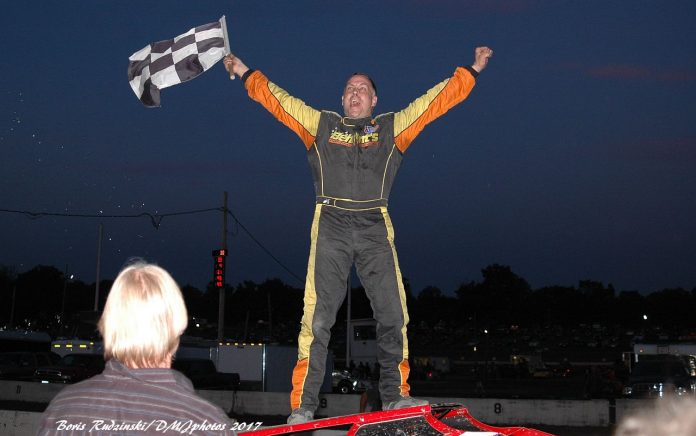 MIDDLETOWN, NY – The famous song “Downtown” by Petula Clark has a lyric in the song that goes like this – “So go downtown, things ‘ll be great when you’re downtown.” Nostalgia.

While Meier was debuting a new Bicknell chassis on this night he certainly didn’t plan on having to come from “downtown.” In fact, its nothing short of grit and determination from his crew and nearly every person who was a part of this team to help get Meier into the feature where he’d start 17th after having the car wrecked severely in his heat race. The entire right side of the car was smashed in with the front axle wiped out.

Wholesale surgery was being performed on the new mount with time clicking rapidly before the feature. There would be no consi race this night and all Modified racing was done before the intermission so the drivers from all divisions could mingle with the veterans of yesteryear in an autograph session. Meier’s crew, including himself, thrashed wildly to just make the call for the feature as they bolted on new parts and replaced tin work and rub rails.

The start of the 30-lap feature seen Billy VanInwegen and CG Morey lead the field to the initial green with VanInwegen blasting right out to the lead while setting a torrid pace that at one point seen a nearly half track lead over the second and third place runners. But, we run 30-laps, not just a sprint.

A series of quick cautions slowed the pace down on lap two. The first incident seen Mike “the razor” Ruggerio loose the handling aboard his #4 mount in turn two while Steve Dodd had nowhere to go and pounded the front of the Ruggerio mount. Both drivers were okay but were done for the night.

On the ensuing restart Tim Hindley rode the wall in the same spot and his night also was done.

With the field regrouped it was back to the green for a final 28- lap sprint that featured edge of your seat action.

VanInwegen was once again checked out on the field but the action behind him was starting to percolate with excitement. “Hollywood” Craig Mitchell was giving the Freedom Plains, Enders powered Bicknell the ride of the year so far for him. With his foot firmly pushed down on the loud pedal he would takeover second on lap three and set his eyes on the leader who was quickly disappearing into the horizon.

Meanwhile, starting 17th on the grid, Meier was knocking down doors and not taking names in his assault on the field. Mind you, this is all green flag, door handle to door handle racing with the no cautions to slow the pace.

Meier was up to fourth by lap 8. The leaders hit their first taste of lap traffic just as starter Jimmy Weed gave the halfway sign. The top three runners of VanInwegen, Mitchell and Gary Edwards Jr., were in a galaxy of there own as they checked out over the rest of the field. No one told Meier this.

Just one lap after halfway Meier found his Behrents Performance Warehouse, Pearseco Properties Bicknell now in fourth and he still wasn’t done with this epic performance. Meier disposed of Edwards Jr. on lap 17 for third and just one lap later he was racing side-by-side in a torrid battle for 2nd. With 20 down and 10 to go, Meier was able to out muscle Mitchell for second and it was full on no holds barred chase for the lead.

As VanInwegen hit lap traffic just after halfway and Meier knocking down doors, lapped traffic would play a role in the outcome of the feature.

From laps 21-25 Meier chased down and caught VanInwegen as they diced in and out of slower traffic. With just five to go, Meier took over the lead and outdistanced himself from second place runner VanInwegen to collect his first win of the 2017 season. Rounding out the top five were Edwards Jr, Mitchell and Jerry Higbie.

Like when he won the Eastern States 200, Meier jumped up on top of car roof and let out a big yell. While the win wasn’t as lucrative as the 200, it was epic in its journey to make it to victory lane.

Nostalgia night drew many competitors of yesteryear. One of those drivers of yesteryear was Buzzy and his son David Reuitmann. Earlier in the day, Buzzy and David made a stop at Behrents to see Tommy Meier and the team at Behrents. Photos on Facebook earlier in the day show Buzzy behind the wheel of the new Bicknell mount that Meier would fly to victory a few hours later…

While leading his heat race with just one lap to go, disaster struck for Anthony Perrego. The motor in his car exploded without warning sending a huge plume of “expensive” white smoke out the back of the car. It was later determined that catastrophic engine failure was the cause. Earlier in the night, Perrego didn’t take place in hot laps as the team only has the one motor and was planning on racing on Sunday at Five Mile Point in the Super DIRTcar Series event. The team utilizes Precision big-block power…

Jeff Heotzler was bitten by the mechanical bugs as well. The team replaced a fuel pump on his Morrison big-block before the feature…

Last week during a podcast hosted on hvrebelcountry.com hosts Andy Crane and Willy Auchmoody interviewed current OCFS promoter Mike Gurda. Highlights of the interview were DIRTcar not on tap to rejoin OCFS at this time, 358-modifieds wont become a weekly occurrence due to financial constraints. To hear the whole interview the show is podcasted and can be listened to at your listening pleasure…

As a reminder, there is no racing on July 1 at Orange County.