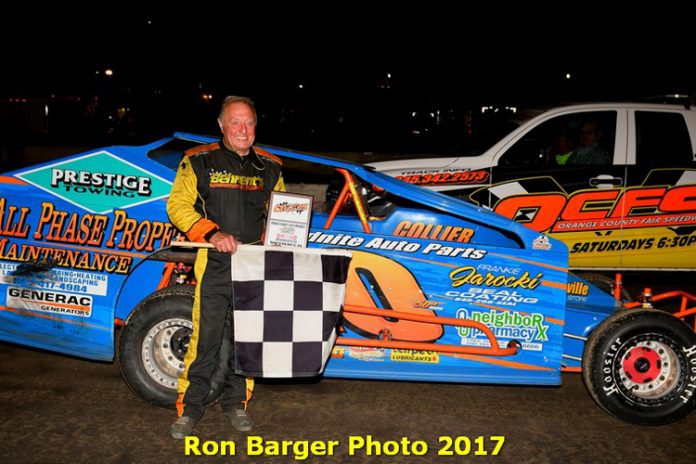 MIDDLETOWN, NY – For 50 years Richie Eurich has been a fixture on Saturday nights at the Orange County Fair Speedway. Sitting at 49 wins since May of 2014, Eurich joined an exclusive club of Modified heroes at Orange County as he scored his 50th career win. In the 50 years of racing at Orange County, Eurich has racked up four track championships and one Eastern States 200 win that came in October of 1988.

Eurich started the 30-lap feature in fifth of the 26 cars that made the show. However, in just one lap of racing, a bizarre and unbelievable turn of events unfolded. It started when the field hit the stripe for the start of the feature as Mike Kolka went high in to turn two and was done for the night. At the same time, a pile up of for a gaggle of cars in turn three would bring out the red flag. When the mess was cleaned up, outside pole sitter Danny Kronk also went by the wayside with mechanical issues when his mount wouldn’t re-fire.

Matt Hitchcock inherited the lead but he also retired before the field hit the stripe for the second time. This gave the lead to Richie Eurich before two laps were officially completed. When the field was given the green again for the final time for the feature, Eurich out raced Chris Schultz for the lead and was off on his voyage for that elusive 50th win.

Schultz maintained that second spot for nearly the entire race while Eurich paced the field. Eurich eased up just after the starter stand each lap to keep the tires underneath the Midnite Auto Parts, Collier, Edenville General Store, All Phases Maintenance JPM powered entry.

As the field hit 10 to go, Eurich got his first taste of lapped traffic by putting Tyler McKee down a lap. With five to go, Eurich could probably hear the Schultz Liberty Rock Crushing mount start to reel him in as they hit turn two.

As the field hit the white flag, chaos enveloped the top three racers. Craig Mitchell suffered a flat right rear and was trying to get to the bottom of the racing surface to avoid holding up the field. This forced Eurich to have his hands full with traffic, Mitchell and a fast closing Chris Schultz. Then, out of nowhere, “The Razor” Mike Ruggerio reeled in Schultz on the backstretch of the last lap and overtook second, but he couldn’t catch Richie Eurich. It finally happened. Eurich got the mechanical demons off his back and was able to score a fan favorite 50th career win.

“Its been a long time coming” said Eurich in victory lane. “ I’m glad were over the hump now. A lot of people have been asking when were going to get to that 50 win mark. I’m just glad we got to it and now its onward to 51 wins.” Eurich added.

“She’s a fighter and she will certainly not let this disease keep her down” said Higbie.

Recently, Lilly recently won a super stock soap box derby race in her second season of racing. Type 1 diabetes affects approximately 1.25 million people in the United States and about 40,000 people a year will be diagnosed with the disease. Type 1 diabetics require daily insulin shots to help keep there blood sugar in check. For more information and to donate to help find a cure for a diabetes please check out diabetes.org…

Last week during the mid-race portion of the night, a terrible tragedy unfolded outside the pit gates. Long time track electrician, a 40 year veteran of the speedway, James Reif suffered a fatal heart attack. A former Navy veteran, the track held a small moment of silence before the racing festivities were to start for the night and track announcer Tim Pitts gave a poignant eulogy. While this info was known last week, it was out of respect for the family of Mr. Reif and for the track that we withheld this information. Mr. Reif’s funeral was held on Wednesday of this past week.

There is no racing this coming Saturday at Orange County as the track takes a break for the 4th of July holiday. Racing resumes on July 8th with the 358 small-block Modifieds back in action and its Military night. Bring a friend or your family member who was in the service or in the service and has the proper id and that person gets in for free….

Jeff Behrent confirmed the reports that Tommy Meier will not be defending his 358 title at Orange County this year.

“Its a time thing,” said Behrent. “We are racing the big-block weekly here, we have another car were racing on the STSS and its just a time thing. Its not fun when your stretched so thin on help its more of a chore than something fun so something had to give”.

Meier will be in action on July 3 at Accord for the next STSS event, The Battle at the Bullring…

Winners prep during the week. They don’t work on cars during the night at the track except to make small adjustments here or there. A case in point is the tire prep that Jeff Heotzler Jr. does for his dads team.

“We run the same tires and wheels for hot laps each week and then switch a set that we already have prepped and ready to go for the heat and for the feature.” …

Look for Jimmy Horton to race on July 3 at Bridgeport Speedway in the 2-40 lap events and also later this summer in the Super DIRTcar Series event at Eldora. Entering the night Horton was the current point leader in the Modified division…

Anthony Perrego was absent from Orange County due to being sidelined with terminal engine woes the last two weeks in the big block ranks. Perrego was in action on Saturday night at Grandview Speedway but the feature was washed out due to rain.