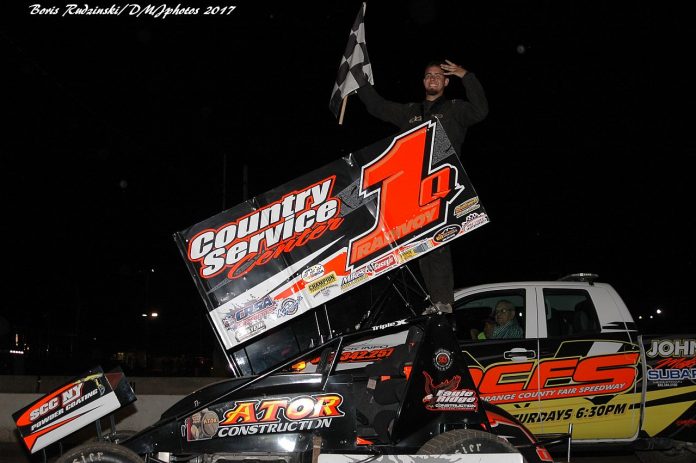 Radivoy and Brett Jaycox would lead the field to the green flag of the abbreviated A-main feature event. The race was shortened from twenty laps to fifteen due the threat of rain in the area. Brett Jaycox knew he had to make things happen quickly because of the race length. He would use the outside starting lane to work through turn one and two to take the lead away from Radivoy early and dominate a majority of the event.

The race was only slowed once for a yellow flag on lap six for Lake Ariel Pennsylvania’s Eddie Strada. He spun his TTI Luxury Motor Coaches number one car and made fairly hard contact with the outside retaining wall in turn one. This would end his evening early.

On the restart Jaycox would resume command of the event with his Outlaw Motorsports 07 car. Radivoy would reel the leader in on some laps and lose ground on other laps. The two fiery competitors would work through challenges to somehow maintain a consistent interval between first and second. Radivoy’s challenge would also turn into a defensive form as well. Killingsworth Connecticut’s Sydney Prince, in the H&R Coal, Richie’s Auto Service 14P car, would lurk closely behind Radivoy and challenge him for the runner-up position. Prince would prove to be the driver that put together on of the best performances of the evening. Her car was dialed in. She was also executing near-perfect laps behind the wheel on a repetitive basis.

The move of the race would be seen when Radivoy and Jaycox were rolling out of turn four towards the white flag. Jaycox would drift a little high through turn four and lose just enough momentum for Radivoy to point his Country Service Center 1Q car underneath Jaycox and take command of the race lead during the final lap of the evening. This would be Radivoy’s third win on the CRSA Sprint Tour season. He reflected on the eventful win.

“I tell you what, that fifteen laps was the fastest fifteen laps ever. I didn’t know how long it was going. I wasn’t watching the lap counter. I just got him with a couple to go. It was awesome.”

Thomas talked about his final move on Jaycox.

“I caught him (Jaycox) on the backstretch. I went into three and I didn’t turn. I went all the way to the cushion and I didn’t think I was gonna finish. But we got it done man. I gotta thank my dad most of all. I also have to thank Country Service Center and Ator Costruction.”

Sydney Prince also had one of the best runs of her career and was able to talk at the podium.

“It was very interesting to say the least. I actually tried to get around Thomas a few times. He had a good run though. Congratulations to Brett too. He was holding in there for quite a long time. I was trying to get around him for most of the time. There were a lot of good drivers and hard racing. I had a blast. I would like to thank my parents and my sister. I also want to thank sponsors at Richie’s Auto Service and H and R Coal. We also need to thank the CRSA staff, tour sponsors and the track at Orange County Fair Speedway.”

Third place finisher Christian Rumsey also had a chance to reflect on his fine performance.

“We had a good run after last week. We struggled a lot last week at Utica Rome. I am mostly glad my uncle is here with us tonight. He has been having some medical issues. I am just really glad to have him here with us.”

Christian was also awarded the Powdertech Coatings Hard Charger Award. He has a specific skill set to succeed on the Hard Clay of Orange County Fair Speedway.

“Years of asphalt racing has helped me here. Everything is just straight and smooth. If you weren’t smooth and straight you were going backwards. We also learned a lot from three years of running the sportsman car here. I want to thank my Dad, my Brother and all of my great sponsors. We could not do this without them.”

The Super Gen Products/Champion Generators CRSA Sprint Tour will head back north next week for another double-header racing weekend. Friday June 30th will be the second stop of the season at Afton Motorsports Park for round two of the Algonkin Motel Challenge Series. The tour then heads north and east to the Fonda Speedway on Saturday July 1st. This will mark another round of the Northway 90 Challenge Series.

Fans and teams can go to crsasprintcars.com to find out more information on the 2017 CRSA Sprint Tour Series season.