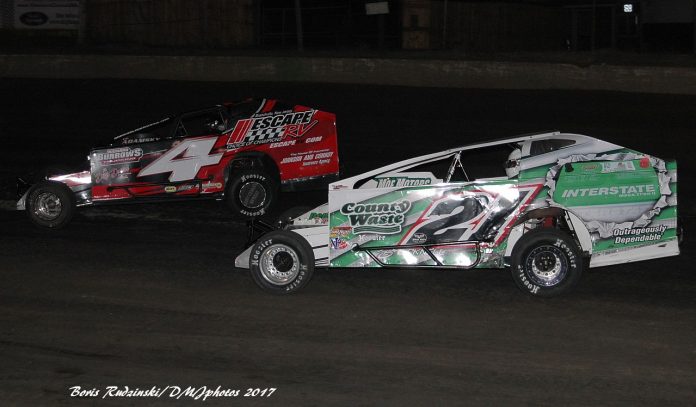 MIDDLETOWN, NY – Following a one-week break so fans and racers alike can spend the Independence Day Holiday weekend with family and friends, racing will resume at the five-eighths-mile Orange County Fair Speedway on Saturday, July 8 with a full program of Big-Block Modified, Small-Block Modified, Sportsman, and Street Stock racing. The Street Stocks will be competing in the $500-to win Drive for Derek feature race sponsored by Team Froggy. And for the youngsters, Kids Club activities are planned.

Falanga Trucking will be the July 8 race night sponsor.

Orange County Fair Speedway salutes our armed services on Military Appreciation Night. All military personnel in uniform, or active or retired with proper identification, will be admitted to the Fairgrounds free of charge.

Information for all Orange County Fair Speedway action is available at the speedway website, www.orangecountyfairspeedway.net, or from at the Track Office. Call 845-342-2573 during business hours.

Tony Stewart’s All Star Circuit of Champions Sprint Car Series presented by Halmar International will be racing at Orange County on Saturday, July 29. Tickets are now on sale at the Speedway Office for this special evening that will also include the Orange County Sportsman drivers and cars.