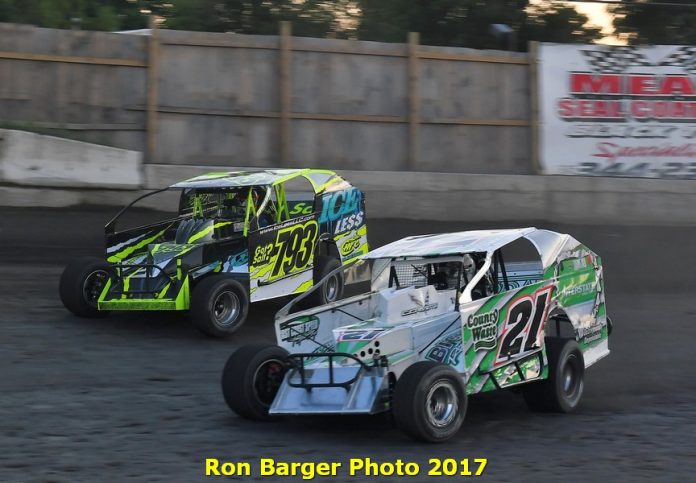 MIDDLETOWN, NY – When the exhaust fumes settle from the Saturday, August 12 race meet at Orange County Fair Speedway in Middletown, New York, there will be just three more weeks of competition before the track point champions are crowned in the Big-Block Modified and Small-Block Modified divisions. The Sportsman and Street Stock divisions have four more outings in which to amass points towards their respective championships.

For drivers in each of the speedway’s competing divisions this makes the upcoming racing program even more important as point championships—including trophies, cash bonuses, and all-important bragging rights—get closer to being determined.

Four racing divisions—Big-Block Modifieds, Sportsman, Rookie Sportsman, and Street Stocks—will be in action on the 12th, with a full program of qualifying and feature races. Also on the evening’s program are Kids Club activities. Holiday Inn of Middletown is the night’s sponsor.

In Sportsman competition, Greg Sleight currently is in the top spot with Jesse Leiby and Jimmy Johnson his closest pursuers. With less than a 25-point lead, Sleight’s championship in the unpredictable Sportsman division is far from assured.


Mike Vigiletti is the point leader in the Street Stock division, with a 23-point edge over Jim Hajkowski. Tommy Pickles holds down third place just three points behind Hajkowski.

The Small-Block Modifieds are not racing on August 12, but will return to action the following Saturday night.

Advance ticket sales for all remaining 2017 races, including the September 16 Eve of Destruction and the October 20-22nd 56th Annual Eastern States Weekend, and track information are available at the Orange County website, www.orangecountyfairspeedway.net, or from the Track Office. Call 845-342-2573 during business hours.