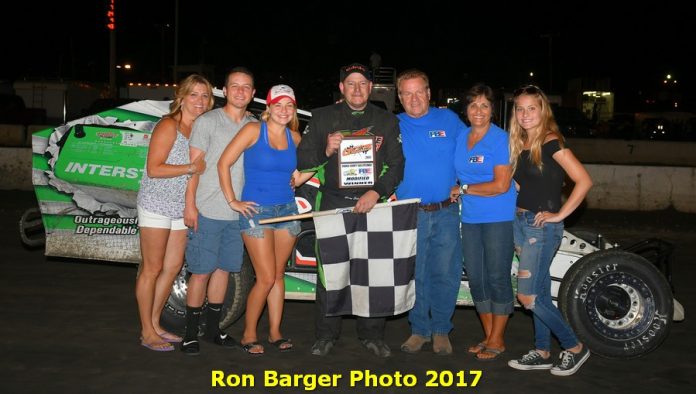 MIDDLETOWN, NY – By virtue of an upfront starting spot, Gary Edwards Jr. held on in the caution plagued carnage filled 30-lap feature at Orange County. It was his first win in nearly three years at the House of Power.

The first six laps of the feature were clean and green until the first caution came out on lap six. Tommy Meier who started sixth had just broken into second spot as the yellow flag fell.

The green flag came back out on lap 7 but the yellow waved again just one lap later for Jimmy Horton and a few other drivers. Horton would rejoin the race and ended up finishing in 5th. One of the other drivers involved in this was Danny Tyler who ended up crashing into Horton causing the rear clip on his Teo to be bent significantly.

Just as the green flag flew for another restart on lap 8, a big pile up in turn four involving Jerry Higbie, Mike Kolka, Craig Mitchell, and Brandon Finley.


Also during this caution Jeff Heotzler dropped out of the race due to either a MSD box going bad or an issue with the carburetor loading up causing the car not wanting to go.

Once again the field regrouped and it was green on the track. Only 7 more laps were completed until yet another caution flag fell. Yellow also flew on lap 20 for Danny Kronk who slowed coming out of turn 4.

With 10 laps left in the 30-lap affair, John Ferrier stormed past Tommy Meier for second as they came out of turn four. With 22-laps completed the yellow came out again this time for Tommy Meier who suffered a flat tire while running third.

With the ensuing restart the game of musical chairs for second wasn’t done. This time it was Chris Whitehead taking control of second as they came out of four.

Just one lap later, Whitehead and Ferrier spun out collecting Richie Eurich as the field had just taken the yellow again for Tommy Meier who again brought out a yellow flag.

With seven to go, the field was once again regrouped and it was off to the races for Gary Edwards who would go on to score his fist victory in 3 years. According to Tim Pitts, this win for Edwards was his 9th career win.

“Being that there was so many cautions you just had to keep the car straight, stay out of trouble, hit your marks and here we are” said a very happy Edwards.

After missing a week Billy VanInwegen was back in action. Helping Billy out weekly is former Modified pilot Michael Storms. Storms now operates a roofing business and has five employees. “I don’t miss racing at all,” said Storms. “I have some money and I run a business and if I never came here again or hung out in someones garage I would be okay with that,” Storms added. While Storms did race in 358 action using a car run normally by Timmy Hindley, Storms said its not going to be a regular commitment or anything serious.

Taking some time off from racing this week was Steve Dodd.