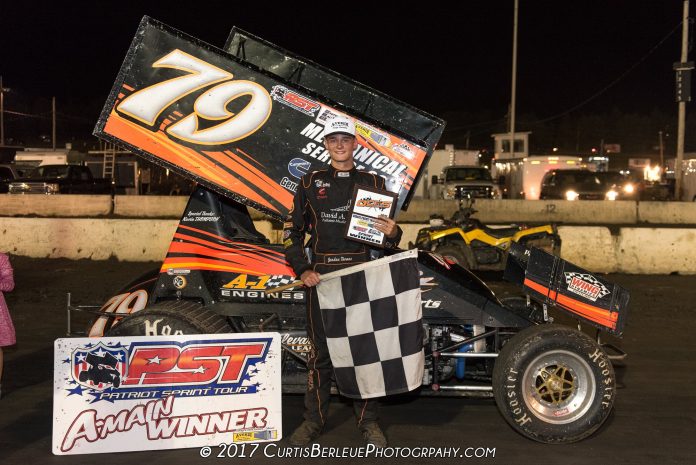 After three consecutive cautions, all occurring on the first lap, the field finally fired with Thomas pulling away early from the rest of the field. Thomas had a very stout field behind him including Curt Michael, Robbie Stillwaggon, Jared Zimbardi, and Steve Collins.

Current URC point leader, Curt Michael began to move forward and was up to second by lap nine getting by Scott Flammer and Bill Unglert. The top three in points in Jared Zimbardi, Steve Collins, and Kyle Drum were all battling for position just inside the top ten but on lap 13, Zimbardi, who was running seventh at the time pulled into the pits after a mechanical failure in his rear end.

Tires as always played a huge factor at 5/8th mile at Orange County and on lap 21, Thomas would almost lose control of the car entering turn one grazing the backstretch wall which allowed Michael to cut the lead in half. It would still give Thomas a mere four second advantage. In the final laps, 16-year-old driver Justin Whittall would battle for the final podium spot with Scott Flammer and would get by him on lap 23.

A majority of the Patriot Sprint Tour teams traveled a very long way to partake in the racing action including Josh Azzi who finished 17th. Derek Jonathan traveled all the way across New York state and had a strong showing in his qualifying race before suffering a terminal mechanical failure.

The point battle between Zimbardi and Collins continues this Friday night, August 25, at the Ransomville Speedway. The last time the Patriots were there back in June, Collins picked up the win back in June where Jared Zimbardi finished third.

The following night is a make-up event at the Mercer Raceway Park which is a Bonnell’s Collision Center Western Weekend event paying $4,000 to win, and $325 to qualify!