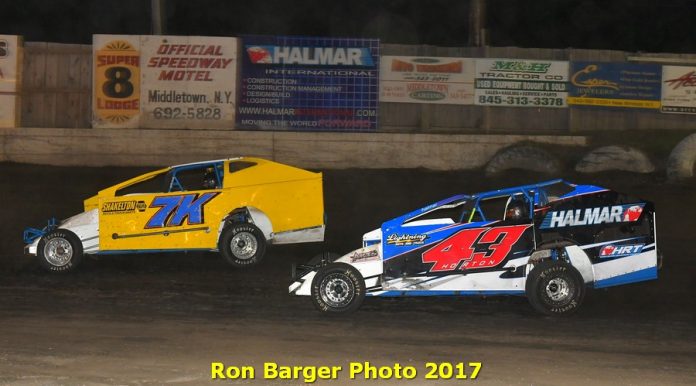 MIDDLETOWN, NY – The final night of the point season for all competing divisions is on tap this coming Saturday, September 2 at Orange County Fair Speedway in Middletown, New York. And in only one of the four divisions is the outcome even close to being decided.

In the headline Big-block Modified division, two-time champion Jimmy Horton (957 points) has a 52-point cushion over defending titlist Tommy Meier (905) and 56 points ahead of four-time champion Jerry Higbie (901). Horton can wrap up the title by simply qualifying for the 30-lap feature race and finishing better than 22nd.

In Sportsman competition, before this past Saturday’s race meet John Leiby held a 21-point edge over Greg Sleight. But Sleight finished third in the 20-lap Sportsman main, while Leiby could only manage an eighth. As a result, Sleight has narrowed the gap to just eight points. Joey Bunning (-34 points) is still in the hunt, while Jimmy Johnson (-52) is all but mathematically eliminated.

Orange County’s Small-Block Modified division has five drivers with a mathematical chance of winning the crown. Anthony Perrego (481) is the current point leader, but Jerry Higbie (450), Gary Edwards Jr. (447), and Tyler Boniface (440) can still win the championship. Chris Stevens (-52) can capture the title only if the stars are perfectly aligned