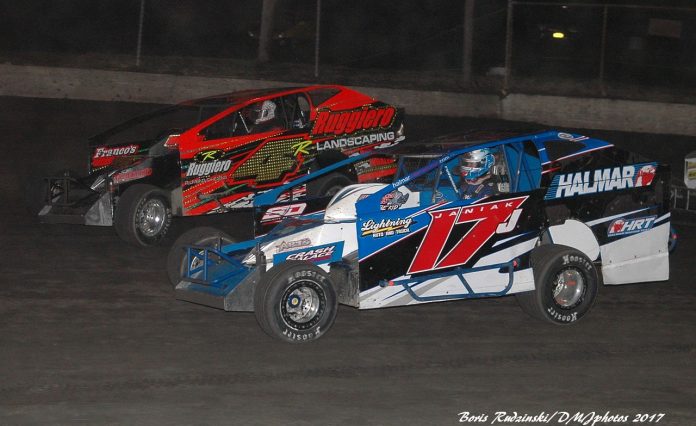 In addition to their Eastern States 200 trophies, this quintet of long-time Orange County racers own a combined total of 17 Big-Block Modified track point championships. Heotzler and Higbie top this ranking, each with four titles, while Horton, Eurich and Meier each have earned three point championships. Horton, recently crowned 2017 champion, won his first Orange County Modified title in 1976; his second in 1996—a 41-year span for the three championships!

They will be challenged by a star-studded lineup of Big-Block Modified drivers from the entire Northeast dirt track Modified circuit as well as the other highly talented Orange County weekly competitors for the trophy and top prize money in this prestigious event.

The 2016 Eastern States 200 was won by Stewart Friesen, who also competed weekly on the Hard Clay. This year, his expected entry will be as an invader, as he split his Saturdays racing either in the Modified division at Fonda (New York) Speedway, or following the NASCAR Camping World Truck Series at tracks across the country.

On Eastern States Sunday, the fairgrounds and pits open at 8:00 am, with spectator gates opening at 9:00 am. On-track activities begin at 9:30 am with the annual Pit Party when all fans are invited to join the racers along the track’s historic homestretch. Cars from all Orange County’s racing divisions will be on display, and drivers will be on hand to greet fans and sign autographs. Following the Pit Party, hot laps and racing promptly gets under way.

Advance tickets for Sunday or the entire Eastern States Weekend and the Thursday, October 19 Short Track Super Series race meet as well as camping and parking permits are available at the Speedway Office during regular business hours, or credit card sales (Visa and MasterCard) by calling 845-342-2573. Tickets may also be ordered from the official Orange County Fair Speedway website, www.orangecountyfairspeedway.net.