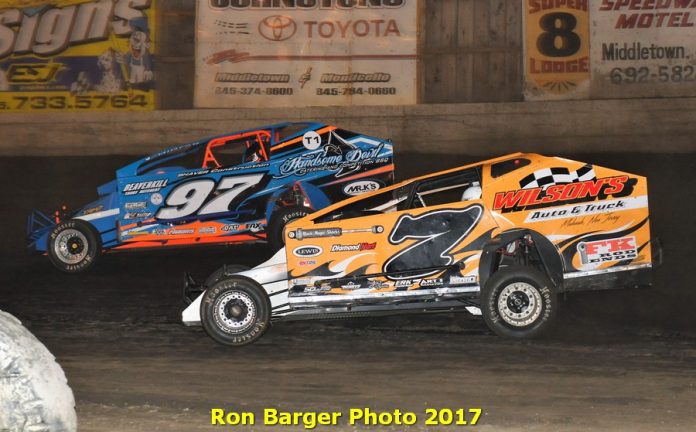 MIDDLETOWN, NY – Six times in Orange County Fair Speedway’s Eastern States history one driver has won both the Small-Block Modified championship race and the headline Eastern States 200 in the same weekend. Danny Johnson swept both races in 1992 and Brett Hearn took top honors in both races five times—1986, 2002, 2004, 2012, and 2014. But neither Johnson nor Hearn ever won as much money as a double victor will this year.

With $35,000 going to the winner of the 2017 Eastern States 200, and $15,000 to the Small-Block Modified victor, plus a $10,000 bonus for a sweep of both races, one driver could leave the historic Middletown “Hard Clay” on Sunday evening, October 22 some $60,000 richer. And this doesn’t include special awards like bonus money for fast time and the pole position as well as a significant bonus for the outside pole slot, nor lap money in both races to the leader of each completed circuit.

The question thus becomes how many drivers will enter both races? And who has the best chance of winning the double?

Several Orange County weekly competitors have raced one or more times in both the Big-Block Modified and the Small-Block Modified divisions during the just-completed season. Their familiarity with the nuances of success on the big, fast Middletown oval gives them somewhat of an advantage to sweep the weekend. But with both Danny Johnson and Brett Hearn expected to return their former “Home” track, these two champion drivers can’t be counted out. Nor can invaders Stewart Friesen, Billy Decker, and Alan Johnson, each of whom have won both Eastern States Modified races, but not in the same year.

The 56th Annual Eastern States Weekend presented by Halmar International, Arkel Motors, and WLR Construction Company, the oldest continuously-run championship race weekend for dirt track Modifieds, is set for Friday through Sunday, October 20-22, 2017 at the historic Orange County Fair Speedway in Middletown, New York. Advance ticket information and sales as well as weekend schedules are available by calling the track office at 845-342-2573 during business hours, or by visiting www.orangecountyfairspeedway.net.