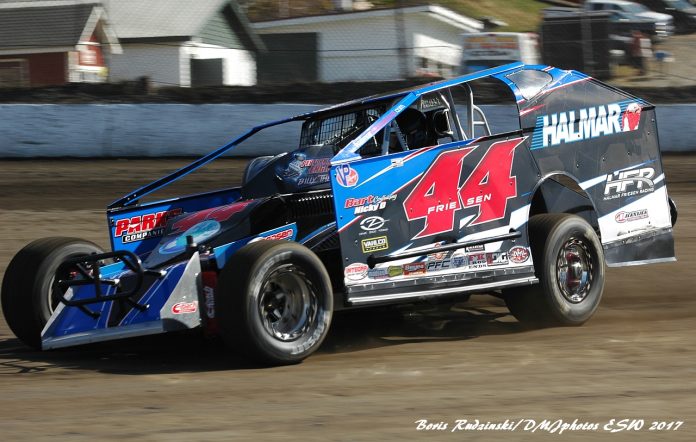 MIDDLETOWN, NY – Stewart Friesen now has a chance at a $60,000 Eastern States Weekend after capturing Saturday’s Eastern States 100 for the 358-Modifieds. Just like in last year’s 200, the Sprakers, N.Y., driver passed Brett Hearn while his way to the win. It was worth $15,000 and set him up for a $10,000 bonus if he can sweep the pair of headline events. “This is awesome,” said Friesen after the triumph. “The guys work so hard on this thing. This is a fresh piece we put together for Oswego and it’s been fast. What a great race. That was pretty cool.”

Gary Edwards Jr., and Hearn led the 36-car field to the start of Saturday’s feature. Hearn jumped to the outside of turns one and two taking the lead on the opening circuit. He was chased by Craig Mitchell and Edwards.

Everyone seemed to get in line to conserve their equipment in the opening stages of the race. Even doing that, Hearn caught the tail end of the field on lap 15 allowing Edwards to get close.

On lap 22 Edwards made a move to get by Hearn for the lead off of turn two. Hearn got back by him off of turn four a lap later before Edwards powered back by him on lap 24. Before Hearn could gather the lead back, the caution came out as Matt Janiak slowed with issues.

Edwards held the lead at the green with Friesen moving around Hearn to take over the runner-up position. Edwards stayed out in front with Friesen staying close behind. Hearn was able to work back around Friesen on lap 31 to take second again.

Tyler Boniface slowed with a flat on lap 41. Under this caution Edwards elected to dive down pit road handing the lead over to Hearn. The stage was now set for a two car race to the conclusion of the race. On the restart Hearn beat Friesen off the corner to keep the lead.

Hearn was the leader at halfway with Friesen and Anthony Perrego in pursuit. He continued to make all the right choices to stay at the front of the field. Hearn kept Friesen in check as they opened up the space between themselves and the rest of the competition.

Friesen saw an opening on lap 64 and he took advantage. Hearn was working to preserve the right rear Hoosier tire on his car. He slipped up slightly and Friesen went by for the lead.

“I’ve been watching Brett Hearn run around here on the same tire since I was 15 or 16-years-old,” joked Friesen. “He definitely took me school. He showed me how to restart about halfway through that race. I don’t know if he got loose there or what. We just lulled him to sleep before we were able to shoot by.”

The next 30 laps saw multiple cautions as drivers began losing tires on their mounts. This gave Hearn and others multiple opportunities to challenge Friesen, but no one was up to the task.

A nasty crash occurred with only three laps remaining in the event. After quick caution for a spin on the backstretch the green came back out with Friesen maintaining his lead. Behind him chaos ensued. Edwards and Andy Bachetti came together running in the top five. Bachetti bounced of the wall and then got slammed by Danny Creeden. Several other cars were involved.  Brad Horton flipped over the inner wall onto pit road. Luckily no one was injured the red flag was required.

Friesen took advantage of the red to check out his equipment.

“On that red flag I poked my head out the window and took a peek at it,” mentioned Friesen in regards to his tire. “I saw there was still tread so I knew I could go pretty hard the last couple of laps and hold them back. I tried to keep my nose clean and stay out of those guys. It worked out.”

After a lengthy cleanup process the race got back underway with Friesen leading the final there laps for the win. Hearn ended up finishing in the second spot after starting on the outside of the front row.

“I was just conserving tires too much,” mentioned Hearn. “I had no idea that I had someone right one me. He just caught me by surprise. By the time I got the car pivoted he was in the hole. It was too late to get going again.”

Tommy Meier got a great final restart to get into third as Edwards slid up the race track.

“We got lucky,” stated Meier. “Restart with a couple laps to go with a lot of money on the line, everyone is tight. I don’t know. The door just opened up and I’m thousands of dollars happier.”

Meier was followed to the checkered flag by Tim Hindley in fourth while Edwards fell back in line to secure fifth. 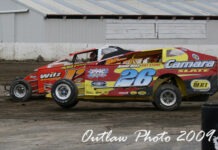 Camara Set to Return to Racing Action in ’23 – DTD Exclusive 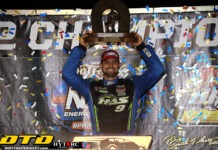