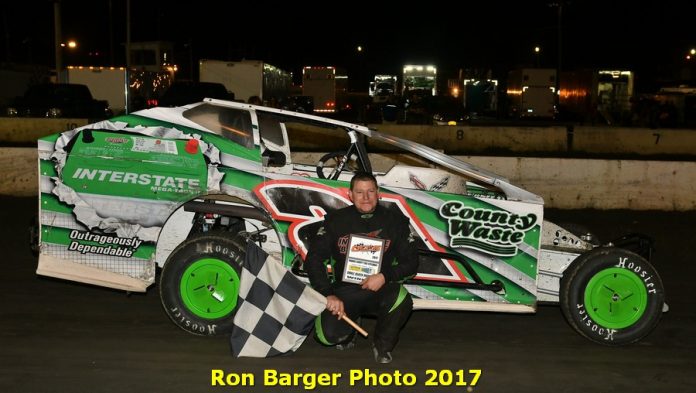 Middletown, NJ – Gary Edwards Jr has been racing at the storied Orange County Fair Speedway for more years than he cares to remember but the one thing the Bloomingburg, NY driver has never done was to sit on the pole for of the track’s marquee events. Well, after today Edwards can check that off his bucket list as He bested a field of 61 small blocks to claim the number one starting spot in today’s ESW Small Block 100.

Edwards time of 20.835 was tops on the charts today to claim his first ever pole award of ESW. Edwards bested a strong field of small blocks to claim his prize.

The Bicknell Chassis that Edwards wheeled to today’s top spot was powered by a CT525 crate motor supplied by Mo’s Motors.

Obviously it was a happy Edwards as I talked to him after his pole winning run with the big $500 check sitting behind him in his hauler.

“I don’t really know what to say, because it hasn’t sunk in yet. We really struggled yesterday with our big block so this goes a long way in helping to make up for that.”

Edwards is hoping starting from the front row will help him be able to save his tires maybe a little, but still expects to have to come in around lap 50 and change at least the right rear tire.

With tire wear the way it’s gone so far this weekend only time will tell. It’s going to be a very interesting 100 lap feature for the 358 small blocks.